England’s new-boy batsmen David Malan and Mark Stoneman have so far been unable to replicate the fluency of their county form in Test cricket. But their hard work is beginning to pay off, writes Will Macpherson from Day 1 at the WACA in Perth.

There’s a joy, albeit a rather perverse one, in seeing folks doing well in a fashion you did not predict. Watch Mark Stoneman and Dawid Malan play county cricket and you see free-flowing left-handers who, when in the groove, dominate attacks with power and elegance.

There is much similar about the pair. They are 30 years old, and have a decade of first-class experience, with a little over 150 games each, and went into today with 40 centuries between them (Stoneman boasted 21 to Malan’s 19) but modest career averages in the thirties that hardly scream ‘Pick me’. They were the two outstanding batsmen in the warm-up matches, and the tour’s only century-makers to date. Both are tough and uncompromising; there’s a scarcity of shrinking violets at Sunniside Working Men’s Club, where Stoneman’s father is treasurer and junior himself heads on Sundays at home in the north-east. Malan’s certainly no softie.

It was rather different, he remarked, from worrying about “having your front pad blown off by 78mph dibbly-dobblers”

Watching them play for England in the last six months, and particularly in this series, has not often followed the same pattern as in county cricket, though. Faced with the rise in pace and skill, and the lift in scrutiny (from media and opposition), they have had their techniques unpicked in a manner county cricket is simply unable to offer.

The worry after two Tests was that both were doing what might be termed full Carberry; both had battled hard, and done pretty well, but neither was setting the world alight or had even escaped the 50s. In a callow batting line-up England needed more. Were they good enough to provide the centuries Trevor Bayliss had been begging for from England’s batsmen?

Hell of a take from Tim Paine with Mark Stoneman getting the faintest of gloves through to the keeper.

The England camp aren’t happy with this…

It was a good day for both. Stoneman whistled along early doors (and hit Mitchell Starc for three successive fours for the second innings straight), before running into a barrage of short-pitched bowling after lunch. His bat was snapped, then his helmet battered (with the stem-guard flying off) by Josh Hazlewood, who kept banging them in during a brutal spell.

“It was a pretty gutsy knock, he stuck it out and gutsed it when it was pretty difficult,” said Tim Paine, who took a brilliant leaping catch to get Stoneman eventually. It was a bouncer, of course, the 92nd he has received this series, that got him, taking the glove on the way through. The method Aleem Dar used to prove this on review was suspect, but the outcome was probably correct. 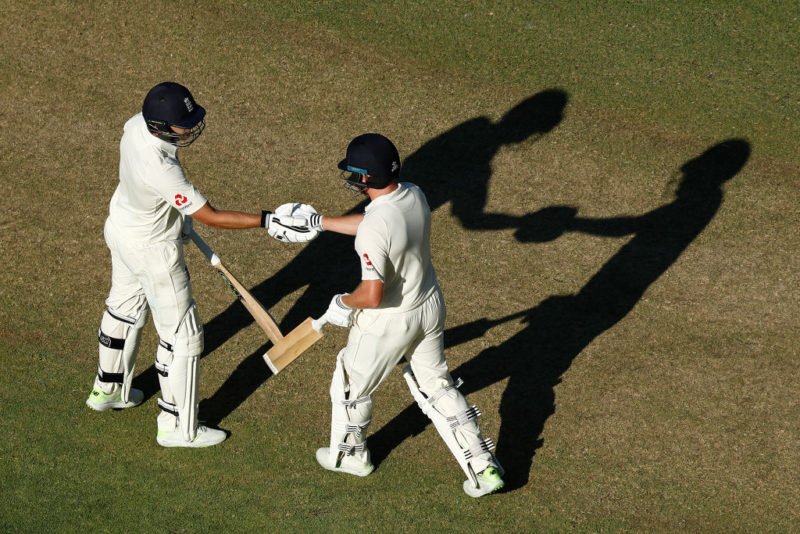 Malan and Bairstow put on 174* for the fifth wicket

Malan came to the crease in this period, when Joe Root was strangled down the leg-side. He never looked uncomfortable, and said afterwards that he was loving it; it was rather different, he remarked, from worrying about “having your front pad blown off by 78mph dibbly-dobblers” at county level. He refused to put away his pull and drove beautifully, too.

Each was the beneficiary of some poor catching from heavy-headed local blokes in the slip cordon. In the midst of a testing post-lunch period and just before being tonked on the noggin, Stoneman drove hard at Hazlewood, and Mitch Marsh – new to the cordon – dropped a simple catch at first. He had 52 then. Malan was on 92 when with the new ball’s first delivery, Mitchell Starc turned him round and Cameron Bancroft made another easy one look positively impossible. Malan had 92.

What a special innings under pressure! #ItsTheAshes

A couple of overs later Hazlewood dug one in, and Malan swivelled on a pull and watched it whistle away for his 13th four, which brought up his maiden Test century and England’s first of this series. Two balls later, he was cover-driving four more and his penultimate ball of the day was sumptuously driven straight for yet another four. For the first time, he looked utterly at ease attacking at this level, playing his natural game. He looked, you know, rather like he does when at his best for Middlesex.

Hopefully Stoneman smashes that ceiling soon enough too. The effort he’s putting in is worthy of it. The pair have more runs than any other Englishmen, and have faced more balls, too.

Malan had worked beautifully with Jonny Bairstow, another whose instincts are swift-scoring but has had to graft hard to work out life at this level. The extent of his accomplishment was hammered home when he reached 68, and brought up 3,000 Test runs. At that stage, his average sat perfectly at 40. The pair, with their unbroken stand of 174, have pushed England into the ascendancy, and will return on the second day with the chance to hammer home the advantage.