Right-arm seamer Josh Hazlewood made a strong comeback to the Australian side after a long injury lay-off, returning 3-58 in his first international appearance since January 2019.

Bowling with the consistency we’ve come to associate with him, Hazlewood persisted with the channel outside off stump and was rewarded with three big wickets. In a display of top-notch seam bowling, he removed Jason Roy, Joe Root and Joe Denly within the first 32 overs of day two of the second Ashes Test at Lord’s on Thursday, August 15.

Nathan Lyon, the Australia spinner, was full of praise for his colleague, hailing him as one of the best in red-ball cricket. “I think Josh has been a world-class bowler for a long period of time and I don’t think he’s got the rewards that he’s deserved as yet,” Lyon said. 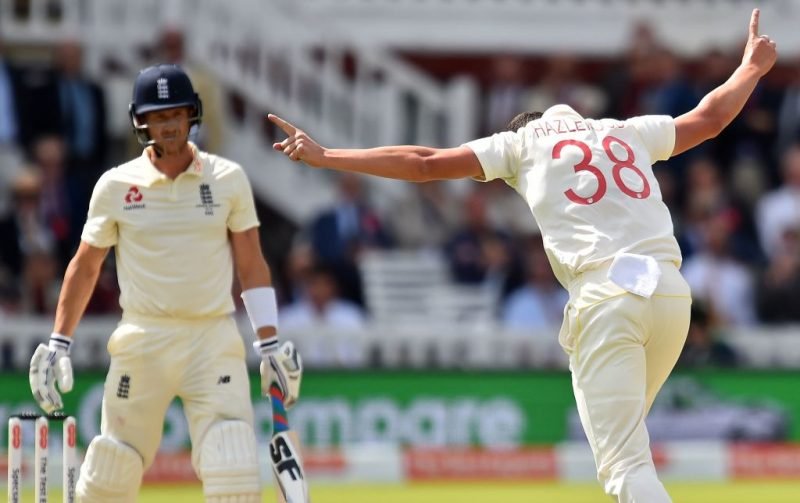 “I think they’re to come. In my eyes, Josh is up in the top three best bowlers in Test cricket … his control of hitting that nagging length but having the skill to go both ways in and out. Then he’s got a pretty strong bouncer as well and it’s always usually on the money.

“I think Josh has been outstanding, I know he was disappointed to be left out of the first Test, but to come back and bowl the way he did today, hats off to Josh, I thought he was the pick of our bowlers.”

While Lyon lavished praise on Hazlewood, he remained sceptical of Australia’s overall display on the day. They had England down to 138-6 but couldn’t stop their lower-middle order from getting to a competitive total of 258.

“If you look at today I don’t think we’ve had the best day if I’m being brutally honest,” Lyon admitted. “I think Josh Hazlewood was absolutely exceptional and the spell from Pat Cummins after tea really set the tone for us. For our standards, I don’t think we were good enough for long periods of time.

“But in saying that, it’s still a good day for Australia. We’ve won the toss, we’ve created more than 10 chances, we haven’t played catch [up] today. We can get better, and that’s exciting, but we still were able to bowl England out for 258 on a day one wicket.

What kind of total can he help England get up to?#Ashes pic.twitter.com/VMtervmr1c

“We’re playing Test cricket, playing against the best players in the world, there’s going to be partnerships here and there, that’s where it comes back to us bowlers hanging in there and doing the basics for long periods of time. I don’t think we did that well enough for Australian standards, our standards we have in our bowling cartel, and in that change room. It’s a positive sign we can get better.”

Jofra Archer’s debut has been one of the talking points of the Test so far, and his maiden red-ball spell, though wicketless, was impressive.

“Of course it’s going to be challenging, but that’s Test cricket, that’s why we play it. Me, personally, I want to challenge myself against the best players in the world and these guys are the best bowlers in the world.”