Will Macpherson reports on Day 2 of the 2017/18 Ashes from The Gabba – a day of industry, innovation and shifting momentum.

England have done so much right in this Test match. It is going better, already, than many feared. The tourists’ top order have fired, and the bowlers gutted Australia’s first four for 80. There’s barely been a mistake in the field. The plans have been smartly thought-through, and smartly executed.

And yet. The game remains in the balance (CricViz currently predicts Australia have a 44 per cent chance of victory, compared to 40 per cent England), and the Aussies might just have a nose in front. Plenty of work remains to even secure a first innings lead. Australia’s biggest wicket is still in the middle.

Who are favourites after day 2 at the Gabba? It’s difficult to call

England had three substantial starts, and no century – or, as Trevor Bayliss would put it, they are still making sixties, not 160s. They are still contriving to collapse and, as feared, have struggled to take wickets when the Kookaburra dulls and the game lulls. Thus the second day ended the way the first started, with the atmosphere eerie, no one quite sure where we stood, and the anticipation for what’s to come next almost unbearable.

England’s morning can be split into two halves: when Australia bowled full, and then when they realised they could bowl short. Dawid Malan and Moeen Ali feasted on the former, and then England crumbled to the latter, losing their last six wickets for 58 in an ugly hour. This is the sort of collapse they have been suffering all tour. 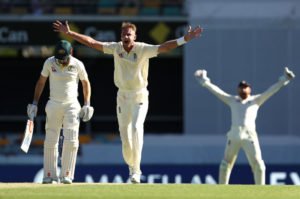 Stuart Broad claimed the wicket of Cameron Bancroft for 5

As a first attempt, 302 felt neither especially good nor especially bad but the performances of the rookies Mark Stoneman, James Vince and Malan, who became the first trio of Ashes debutants to score a half-century in the same innings ever, were very encouraging.

Throughout the afternoon session and for the first 15 overs of the evening, England were sensational, and nothing if not inventive. In the build-up, they spoke plenty about their plans, without ever revealing what they were. 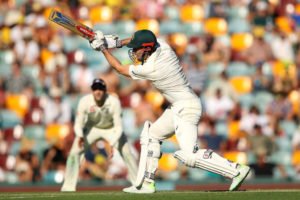 Here we got a look, and Joe Root certainly brought the funk. He tried everything, especially to Steve Smith, because it requires strangely brilliant plans to dismiss strangely brilliant batsmen. He even bowled himself late on and, even if it’s turning, that was not in the plan. At various times with various bowlers he tried silly mid-on, leg-slip, a man on the drive, a long-on so wide he looked lost, and two in front of square on the leg-side. Smith never got away from England, but England never got him away either.

Meanwhile, David Warner was offered singles, and managed just three boundaries in 43 balls before frustrating himself out with another short-arm jab to a well-placed midwicket off Jake Ball. Warner averages 104 in the first match of the last four Australian summers; dismissing him for 26 represents a major victory.

By then, Cameron Bancroft had already wafted hard at Stuart Broad, and Usman Khawaja had fallen to Moeen in similar fashion to Moeen’s own dismissal to Nathan Lyon earlier on. Unlike Moeen’s, Khawaja’s demise was not worth questioning. He turned and trudged off, knowing his struggles against spin were not exclusively overseas and that he had fallen prey of England’s plan – Moeen had been brought on as early as the ninth over specifically to get him out.

In the first over after tea, James Anderson dismissed Peter Handscomb, struck on the back pad deep in his crease by one the old swinger ran the fingers round and plumb as plumb can be, yet still requiring a review to prove it. The innings of Bancroft and Handscomb will have been hugely encouraging, because Bancroft looked like an lbw candidate and then nicked off, while Handscomb looked like a nick off candidate and then fell lbw. England will fancy themselves to think both men out. 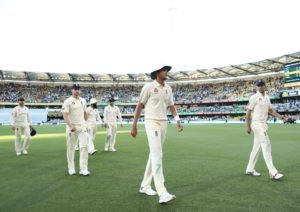 Australia ended day 2 on 165-4 in Brisbane, on a day of shifting momentum

From there, England turned the screw but the cork would just not pop out. Australia scored 10 runs in 11 overs to start the final session; Smith went 77 balls without a boundary; Marsh went 24 balls between runs. But the storm was weathered and the pair had ground out 89 by stumps. England ended the day by employing the Yorkshire Wall – with five men catching close in front of square to Broad. You certainly cannot accuse them of a lack of industry and innovation.