Rory Burns and Joe Root were resolute after a delayed start in soggy Manchester, but Josh Hazlewood came to the party in the final session on day three of the fourth Ashes Test. Rich Evans reports.

A gritty 141-run stand between Rory Burns and Joe Root raised English spirits at Old Trafford before a flurry of wickets from Josh Hazlewood at the backend of the third day restored Australia’s command. Rain delayed proceedings until 1.30pm, but Joe Root wouldn’t have been perturbed by the loss of play; After England’s brutal punishment at the hands of Steve Smith on day two, CricViz’s WinViz predictor gave England a one per cent chance of emerging victorious.

England’s day started on a damp note when the impressive Josh Hazelwood made the early breakthrough, removing nightwatchman Craig Overton, caught second slip by Smith on the ninth ball of the day. Spitting up off the deck, it was a ball that most regular top-order batsmen would have succumbed to. 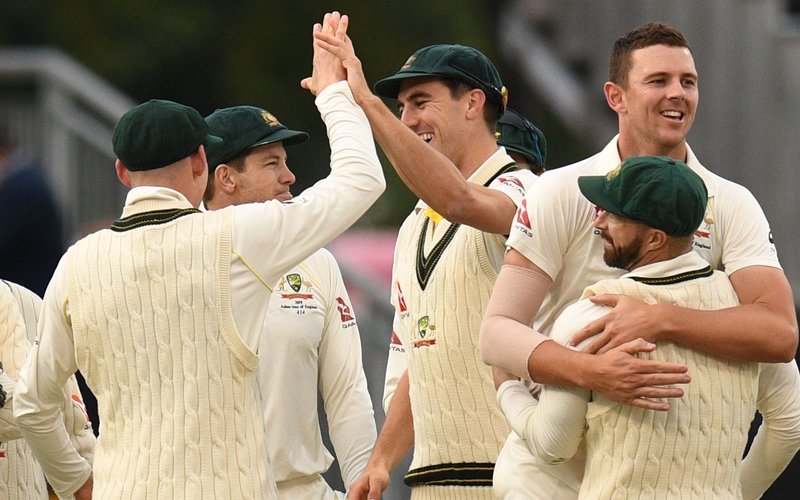 Burns, who fended off the short ball admirably throughout – he’s never faced a higher percentage of short deliveries in a Test knock – played watchfully for his early runs, once again proving his worth in England’s problematic top order; since Andrew Strauss retired, only four England openers have passed fifty twice in a home Test series: Alastair Cook, Root, Alex Hales and now Burns.

The resilient opener raced from 40 to 50 when Mitchell Starc fluffed his lines, scoring at a quicker rate than Root whilst claiming his fourth Test fifty from exactly 100 balls. There are more elegant stroke-makers across the shires, but with a steeliness akin to predecessor Cook, the Surrey skipper’s stock continues to rise.

Root almost chopped on to Nathan Lyon before a run out attempt prompted ironic cheers from the Barmy Army when the spinner gathered cleanly, poking fun at the Aussie’s all-important spill in the dying stages of the Headingley epic. Thereafter, the crowd found their voice every time he was tossed the ball. The Burns-Root partnership had reached 100 at tea after a gruelling two-hour 50-minute session, with England 125-2 off 47 overs – 372 runs behind. 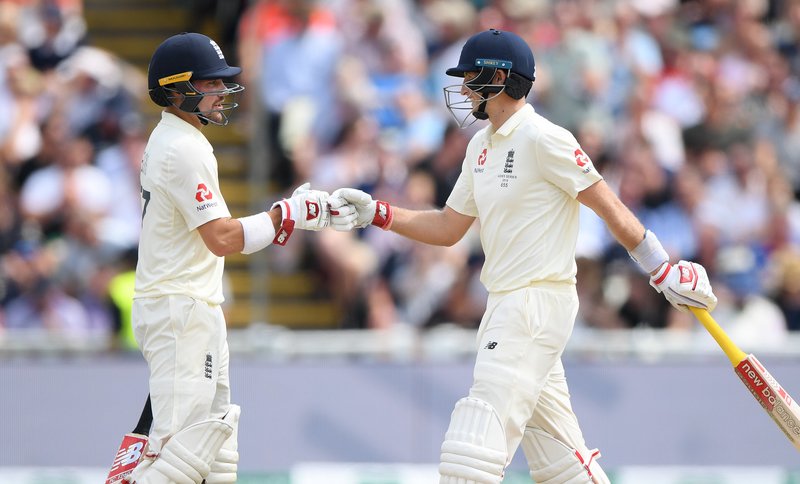 Despite claiming nine wickets at Edgbaston, Australia’s subsequent losing draw and loss has coincided with a toothless Lyon: 3-170 at Lord’s, 2-116 in Leeds, and, by stumps, 0-68 at Old Trafford. Despite Superman’s Headingley heroics, there was still evident fallibility from Ben Stokes against the twirler, but though Australia’s fielders shared some of the blame, 2-114 from 39 fourth-innings overs was inadequate for a bowler many rate as the best finger spinner in the world. He has also been outshone by Jack Leach since the Somerset spinner’s Lord’s recall.

Australia’s fast bowlers just didn’t target the stumps enough for the main part, relying almost exclusively on finding an edge. Just before tea, CricViz reported that only 13 deliveries from Australia’s bowlers would have hit the sticks – the third lowest proportion of balls projected to hit the stumps the Aussies have recorded in the last two years.

Though not his fluid self, Joe Root found joy at four, permitted his favoured position after Overton’s elevation yesterday evening. It’s where he should have been all series. The Smith v Root head-to-head was always going to be a vital, and while the former has reconquered his spot at the top of the Test batting tree – batting at No.4 – Root has been made to look second rate in this series.

With Joe Denly, Rory Burns and Jason Roy all included in the squad for the first Test – all of whom have experience batting in the top order, despite mixed credentials – it was a move that England didn’t have to make. Many deemed it a positive change, but it’s only served to destabilise England’s best player. Root averages around 10 runs more at No.4 compared to the 38.95 at three, and perhaps most telling is his average of 71.44 in his 29 innings from No.5. Furthermore, pampering Roy with the highly desirable No.4 berth seems wasteful.

Cummins, the only Aussie seamer to play in all four Test so far, bowled ten overs on the bounce – risky in the first innings of back-to-back Tests – but it was his replacement Hazlewood who did the damage

Root crawled his way to fifty after tea, before snicking between keeper Tim Paine and David Warner at first slip. Cummins then thumped his pads, prompting another poor Australian review – hitting outside the line and missing off. Root’s protective gear was failing him; the delivery caused the Yorkshireman serious pain, receiving treatment for ten minutes, while his box had split earlier in the day after an eye-watering blow.

Cummins, the only Aussie seamer to play in all four Tests so far, bowled ten overs on the bounce – risky in the first innings of back-to-back Tests – but it was his replacement Hazlewood who did the damage, first removing Burns, caught by Smith in the cordon to break a defiant stand of 141. Roy ambled out with a high score of 28 in the series and looked shaky before a classic cover-drive settled some nerves. It wasn’t long before Hazlewood made a mess of his stumps through, playing loosely to one that angled in, but not before the tall seamer trapped Root (71) in front with one nipping back and keeping a tad low.

The light metre put an end to proceedings at 6:47pm, with England 200-5 after 74.0 overs. While Burns and Root showed a lot bottle, the penetrative and ever-accurate Hazlewood undid that fine work in the final hour, and with the weather set fair, Australia will be confident of regaining the Ashes over the next two days.