Back in 2014, Wasim Akram, one of the game’s greatest fast bowlers, talked Steyn-Anderson, reverse swing and Pakistani cricket.

“Is that Wasim?” The phone line is crackly but rarely in the last 30 years would Wasim Akram have been asked to confirm who he is. “Yes, you rang me,” comes the swiftly delivered reply. Embarrassed, I want to explain that there have been issues with the phone line and that the post-it note bearing his telephone number has already led to a wrong number being dialled – but this is Wasim Akram, he doesn’t need to know about my trivial technical foibles. I apologise and crack on. Still, given his success on these shores with ball in hand, he should be used to dealing with befuddled Englishmen trying their best to do their job.

The crackly phone-call was ahead of seeing him at Azhar Mahmood’s Benefit Dinner at a London hotel, where he is one of the guests of honour. Names don’t get much bigger in Pakistani cricket and he’s as suave as you like – all camera poise and statesmanlike smiles. Aside from his coolness, it’s probably his enthusiasm that’s most evident. He’s 48 years old but seems much younger.

We talk first about his recent media commitments and the England-India series he’s been covering for Star Sports. Straight away he’s off: “The depth in the Indian batting and bowling line-ups simply wasn’t there. Very quickly England worked out what to do with that sort of batting. Every time Jimmy Anderson and Stuart Broad were bowling, and they bowled beautifully in the whole series, you thought ‘they’re going to get them out, they’re just going to get them out’.”

Before I can get in with the next question, he continues… “Those teams who are playing a lot more Twenty20 cricket – like India – they are suffering in Test cricket and that’s especially true for teams from the subcontinent. It’s difficult to change gears between the two forms, especially against the likes of Broad and Anderson, and especially on the kind of wickets you can get in in England. You need different technique.” Like many people before me, I’m learning it’s hard to stop Wasim Akram when he’s on a roll.

A debate raged recently. Steyn or Anderson? For some it might seem a straightforward question. Anderson, for all his obvious talent and ability, doesn’t come anywhere near Steyn’s stats. It’s 380 wickets at 29.72 for Jimmy versus 383 wickets at 22.56 for Steyn. Contest? What contest?

But another factor was brought into play – that of skill. Jimmy is, according to his skipper Alastair Cook, “the world’s most skillful bowler”. England’s fast-bowling coach David Saker went further the previous summer: “I know Dale Steyn is an outstanding bowler, but when you watch the way Jimmy goes about things, he has more skills in his locker. Steyn might be a little quicker but watch Anderson deliver those skills and it’s just mind-blowing. When he gets it right, there’s no more skillful bowler in the world.”

It’s a question that has pertinence to Wasim. Making his Test debut in 1985, he came on to a scene that was all about pace. West Indies were still fielding a pace quartet of Marshall, Holding, Garner and Patterson – over the previous 10 years it had been them laying down the marker for seam bowling in Tests. In contrast to their fire and fury, Wasim was languid, cunning, artistic. Who’s better placed then to wade in on the Anderson v Steyn debate?

“It’s difficult. You should really go by their record but, then again, average over a long run matters to me as a bowler. Anderson impressed me when he went to India and his control and reverse swing was equally good as it is in England – Anderson is a complete bowler, I reckon.”

Longevity. Control. Reverse swing. A complete bowler. Might it be that Wasim sees a bit of Anderson in himself? The Anderson-Steyn debate is never going to be fully settled, you’re either a Steyn supporter or an Anderson supporter – and that’s because they offer two different types of bowling: artistry versus something a bit more primal, brutality versus deception. It’s no surprise that Wasim favours the subtle and learned art of Anderson. 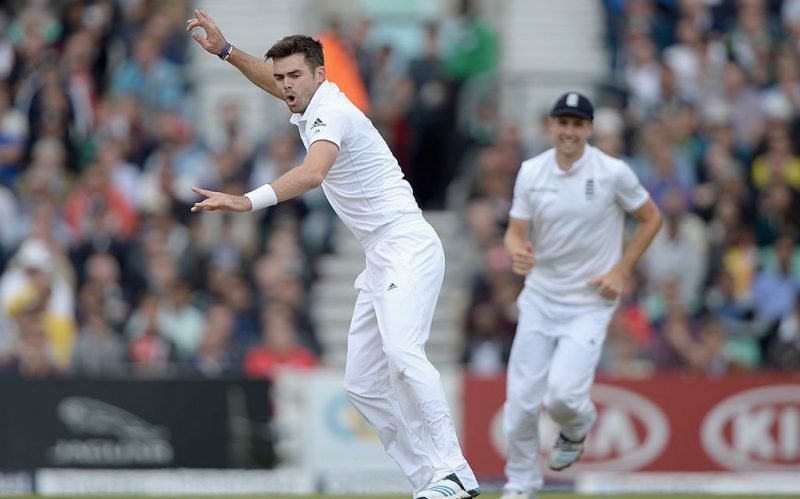 “Anderson is a complete bowler”

Art is something that Wasim keeps coming back to – and the need to master one’s skill. “In 1986, before I first toured England with Pakistan, Imran [Khan] told me to go and play league cricket in England because it has its own context. He wanted me to get used to the weather, to the slower wickets, to bowl a slightly fuller length and I enjoyed it. I was on my own for six months, playing twice a week. It was very different for me.”

Does he not see a similar level of commitment from today’s cricketers? “I’ve been saying this for the last two years and I do ask these boys. It’s an issue: they give them endless fees but if you think about the Indian players who have just played in England – they will know now the importance of county cricket, and not just county cricket but learning about cricket on different tracks. After my season with Lancashire in 1988, I went to Australia. I became the No.1 bowler in the world, I got 11 wickets in the first Test, I scored a hundred and took five wickets in the second and made 80-odd in the ODI, so one year of county cricket did wonders to my game.”

I broach the topic of Pakistani cricket. Consistently mercurial, occasionally volatile, few understand it better than he does. Where is it at the moment? “First of all, we have to concentrate on first-class cricket – that’s a shambles; no wonder our batting is struggling whenever we play Test cricket, because there’s no technique.

“Second of all, we have to invest a lot more money to play more international cricket, and have A teams and Under-19 teams, but it’s not happening. We lost two Test matches recently against Sri Lanka on placid wickets. If this was 10-15 years ago, those matches would have been drawn or Pakistan probably would have won. I mean we have Moin Khan, Waqar and Misbah-ul-Haq and it’s a new set of people: people with energy and passion. Misbah is, I think, the best choice [as captain]. But they played against Sri Lanka after about four months without international cricket. The last tournament they played was in the T20 World Cup. No cricket for four months? Every team would struggle.”

The biggest question of all is whether Pakistan will be able to return to playing their matches at home. I ask whether it’s going to happen. “I hope so but it depends. The sooner the better, but it all depends on the governments and how they react to it. I would love to see cricket in Pakistan. Pakistanis love their cricket, it’s part of them, it’s part of their culture and it would improve Pakistani cricket. I grew up watching Test cricketers in Gaddafi Stadium but the youngsters now have no heroes to look up to – I mean all these Andersons, Cooks, Kohlis or McCullums – they’ve heard their names but they don’t know who they are. They haven’t seen them close up.”

“The British invented this game and they thought it belonged to them, so we had to make sure we beat them.”

Whether it’s cricket in his homeland, young players failing to put in the hard yards or the primacy of Test cricket, Wasim speaks now, for someone once so revolutionary, like something of a purist. He wants youngsters in Pakistan to see their heroes, he wants young cricketers to improve their game, he wants to see better cricket. There’s a fascination with the art of bowling that’s so apparent – he talks about wrist position like a car enthusiast gets misty-eyed about a Jaguar E-Type. He sounds like a great coach – I feel like I’m learning just speaking to him. Has he been able to pass on his reverse-swinging expertise to his charges at Kolkata Knight Riders? “You can actually tell them exactly what happens. You see, reverse swing is all about affecting the situation of the ball. As well as the bowler knowing what’s happening, the whole team has to know how to look after the whole ball once it starts reversing. One side of the ball has to stay rough and the smoother side has to stay shiny.

“When Waqar and I did it the whole team had to know how to look after the ball, and I think Mushy has passed everything to England, and well done to them, they have picked it up. They’re also reverse-swinging the ball in one-day cricket – that’s two new balls – again, that’s an art. England are the best at reverse-swinging – back in 1992, I would never have thought that one day they’d be giving us our own medicine!”

The incomprehension that England would be world leaders in the art of reverse swing is unsurprising. When he and Waqar unleashed it in 1992 the hosts’ reaction was not that of a country keen and eager to learn. There were accusations of cheating in the tabloid press and the ball was changed during the fourth ODI. It was an ugly time.

What’s Wasim’s view of all that now? “We were artists and we learnt the art from Imran. When nobody knew what we were doing they said it was ball-tampering. The same press now say ‘It’s an art, it’s called reverse swing,’ because England have learnt it and the whole world has got to know. All those people who said that we were cheaters, they should come out and say ‘Sorry guys, we messed up’.”

The best artists rarely are understood in their own lifetimes.