Cricket’s always had a weird obsession with food and there have been quite a few heavy grubbers. Not content with stopping a match twice a day for a bite, the history of the game is full of curious culinary yarns…

Sandwiches lie at the heart of the cricket-playing experience, and most of us consider the tastiness of the interval sarnies a crucial part of the whole show. But not so, apparently, for grizzled Aussie keeping legend Rod Marsh. The culture of drinking in Australian cricket in the Chappell-Lillee era is said to have been formidable, and Marsh was, according to team-mates, not only prolific behind the stumps. When reminded, late of an evening after play that he hadn’t eaten since the teabreak, Marsh would reply: “I’ve had 20 malt sandwiches”, which is better than cucumber, sure, but not a patch on cheese and pickle.

Slightly off-topic, but this story is too good not to include. Food-related jibes can be the most hurtful of all for some people, and for portly Pakistani run-merchant Inzamam-ul-Haq, one barb from the crowd was so persistent that he flipped. During a Pakistan v India match in 1997, one crowd member repeatedly called from a megaphone “mota aaloo” or “fat potato”, and eventually grub-guzzling Inzy took the only reasonable course of action available to him: he waded into the crowd waving a stump and threatened to kill him.

8. Warne serves up a variation

As English batsmen made hay during the 2010/11 Ashes, and successive baggy-greened spin bowlers fell by the wayside, the hosts must have felt like calling for the help of Shane Warne. The pre-transformation retiree did his best to distract his old mate Kevin Pietersen as he approached a double hundred in Adelaide. With Doug Bollinger entering delivery stride, KP suddenly – and annoyingly for a bowler for whom running to the wicket is no formality – pulled away.

The reason? Shane Warne’s face was plastered over the sight-screen next to a McDonald’s chicken burger, much to the amusement of the legendary twirler’s Sky commentary colleagues. Warne has a complicated relationship with food himself (who knows how he keeps in the shape he does now…) and admits that in his younger days he used to eat very little other than ham and pineapple pizza. Liz wouldn’t stand for that these days… 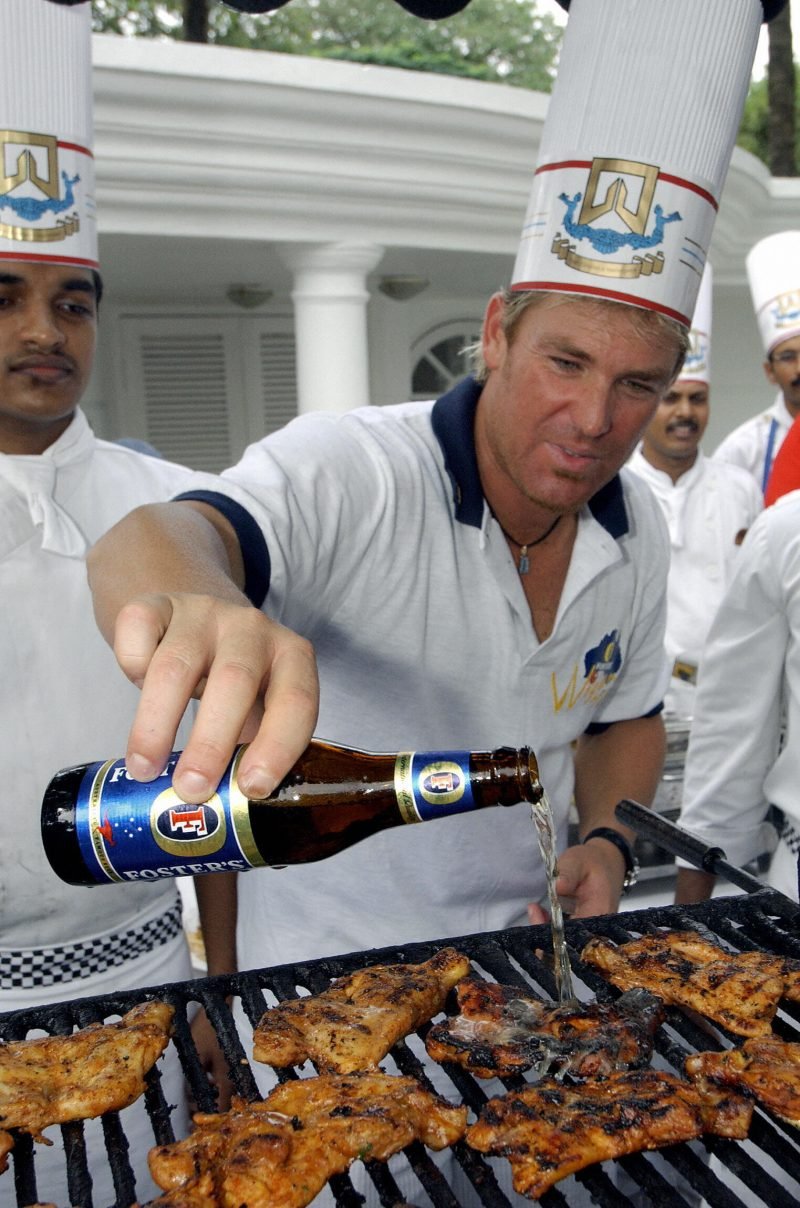 Touring the subcontinent can be a difficult business, and many a cricketer has spent a day’s play MIA whilst nursing a viral complaint in their hotel room. But some go to extreme lengths to avoid discomfort. Alec Stewart famously ate the Presbyterian meal of skinless grilled chicken and sauce-less vegetables for 40 consecutive nights on tour in India. His 12-year team-mate Mike Atherton, who was keener to sample the exotic – though more dangerous – local dishes on offer, wrote in his autobiography that Stewart “has a narrow focus on sport and life” and added: “I often wonder whether he will look back with regret at some of the missed opportunities touring life offers.” Mind you, the Gaffer played for England until he was 40, so we guess he was doing something right.

The Somerset captain’s love affair with the sausage is well known. Nicknamed ‘Banger’ to this day, as a child his affection for the porky articles was passionate and profound. “Sausages were my favourite,” he wrote in his autobiography, before describing his schoolboy diet thus: “sausages, chips, sausages, toast, sausages, baked beans, sausages, cheese, sausages, eggs, sausages and the occasional sausage thrown in, topped off with a sprinkling of sausage.” Not recommended by today’s nutritionists, but a sportsman needs his protein.

The Australia team used to appear in adverts for healthy breakfast cereal Weet-Bix, but these days it’s KFC who are all over Aussie cricket like a tasty breadcrumb coating on a leg of greasy bird. They are, according to their website: “The official restaurant of Australian cricket”. We live in strange times. Channel Nine coverage of the Big Bash often sees the commentators singing the Colonel’s praises during play, and they have offered to reward the winner of the KFC Classic Catches Competition with “a year’s supply of KFC.”

Stuart MacGill once refused to appear in a KFC advert as part of his Cricket Australia contract, pointing to hypocrisy after he was told by the management that he needed to lose weight. “Cricket Australia and KFC would say they’re promoting a healthy lifestyle,” he said, “but it’s tripe.” Not strictly true, Stu, but we get where you’re coming from.

The India-Pakistan rivalry has produced plenty of victims over the years, but in the run-up to the nations’ cricket teams meeting in the 2011 World Cup, there were two unlikely beneficiaries. Assistant sub-inspector Rakesh Rasella and sub-inspector Ramphal of the Chandigarh police enjoyed three lavish meals a day at the luxury Taj hotel in Chandigarh to check for poisoning, in case of sabotage of the players’ preparations. Rasella told the Times of India: “I have tasted more than 18 different dishes before they were consumed by cricketers and I hadn’t eaten many of them ever (before).” They serve more than just doughnuts at the Taj Hotel…

Ever the modern man, in 2010 Darren Gough launched an online cookery school for men in the run-up to Christmas called Give The Bird A Break, which, he assured us at the time, “is a great name.” He explained: “What I’ve done is show men how easy it is to cook good meat and give the other half a break. While they’re out shopping and doing the wrapping we should be in the kitchen with a pinny on.” Dazzling stuff .

The canine keeper was an oddity in a number of ways, particularly his eating habits. His lunch on match days consisted of two Weetabix soaked in milk for exactly 12 minutes (he got the 12th man to pour the milk eight minutes before he came off the field.) Teammates say he drank upwards of 20 cups of tea over the course of a Test match, using the same tea bag, which he would hang on a nail in the dressing room between brews. Although Russell’s favourite dinner was mashed potato, baked beans and HB sauce, Angus Fraser recalls that, on the 1994/95 tour to Australia, the bushy-lipped gloveman went to the same Chinese restaurant every evening, and asked for “chicken and cashew nuts”, with the small amendment that the cashew nuts be taken out. Fruit cake, anyone?

1. At home with Beefy and Lamby

As meatily built as they were meatily named (or nicknamed), Ian Botham and Allan Lamb’s long-haired, moustachioed cartoon faces filled our TV screens when they starred in those ads for quality-assured meat a few years ago. In one, with Lamb cooking a leg of, well, lamb, Botham polished a red onion on his trousers before adding it to the roasting tray. Not comedy gold, but let’s face it, the cartoon Beefy and Lamby knocking around their shared fictional home – in full whites and pads – indulging in repartee over a roast dinner, while Blowers does the voiceover… You can’t buy that kind of magic.