Phil Walker pens down ten of the saddest ends featuring some top internationals – moments when the last act left a tear in the eye.

There are so many ways to go. The successful ones, the lucky few who depart as winners, get to drink in the adulation. Think Ganguly, retired as a hero immediately after stuffing the Australians; or Nasser, punching the skies at Lord’s after his winner against New Zealand and calling time minutes after. Think Imran in a green kit at Melbourne. Think Warne at Melbourne two winters past, and McGrath at Sydney a week later.

Most are not so lucky. The saddest stories, of course, concern those who suffer injury, and are never the same. We have included one of those stories here, though the stories could have made a whole separate list.

But most cricketers depart to muted applause. Many are just dropped, suddenly gone forever, ageing heroes reduced to a press release announcing the end. Sometimes there is even dignity in the bowed departure of a defeated man. Other times it’s just plain sad, or, worse, plain unfair. This list contains a smattering of all the above – the painful, the sad, the wrong and the poignant. Always the poignant.

When Inzamam ul-Haq miscued Zimbabwe’s Tawanda Mupariwa to mid-off in the final match of Pakistan’s tragic World Cup campaign, the tears that flowed as he crawled off through a guard of honour were not so much those of a great cricketer departing unfulfilled from the international scene, but the outpourings of a man broken by the death of a friend. Those tears were for the Pakistan coach, who had been found dead in his hotel room just days before. Those tears were for Bob Woolmer. 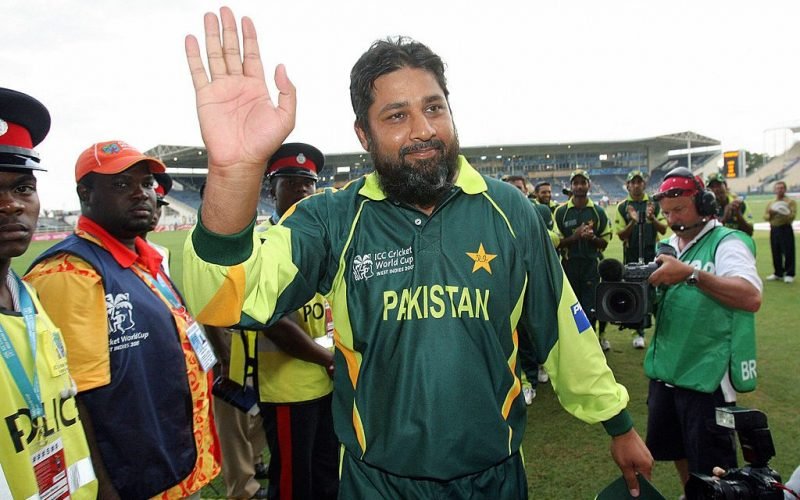 This was one of those departures that got sadder with time. It may have been an error of judgment to shoulder arms to Waqar Younis at The Oval as England collapsed to surrender the series, but the mistake was small beer compared with the one subsequently committed by the England management. Despite excellent returns that summer against a superb Pakistan team, Gower was dropped for the winter tour of India. His Kennington leave-alone would be his last act as an England cricketer. For a man with all the shots in the world, it was a horribly inappropriate end to a great career. 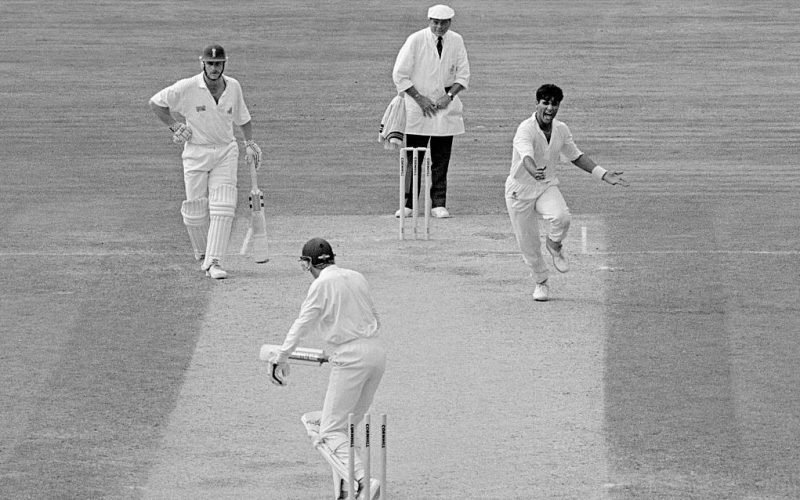 David Gower is castled by Waqar Younis at The Oval

He has never sought pity and will tell you he should have bloody middled it, but we all lost control of our bottom lips when the curtain came down on Michael Atherton’s career at The Oval in 2001. There was resonance in the way he went – nicking off to the Australians, and to one Australian in particular: MA Atherton – caught Warne, bowled McGrath 9, precipitating another English Ashes collapse. A sad end, then, but a strangely noble one.

So much hope was invested in the 2007 World Cup. This was meant to be the party that reawakened the Caribbean’s love of cricket. We had visions of packed stands and thrilling cricket embellished by a revitalised West Indies side. What we got was cricket’s equivalent of a wake.

Brian Lara, West Indies champion and captain, had announced before it began that he would be retiring after the tournament, and the neutrals prayed that this great player would be afforded a victorious, or at least honourable send-off. 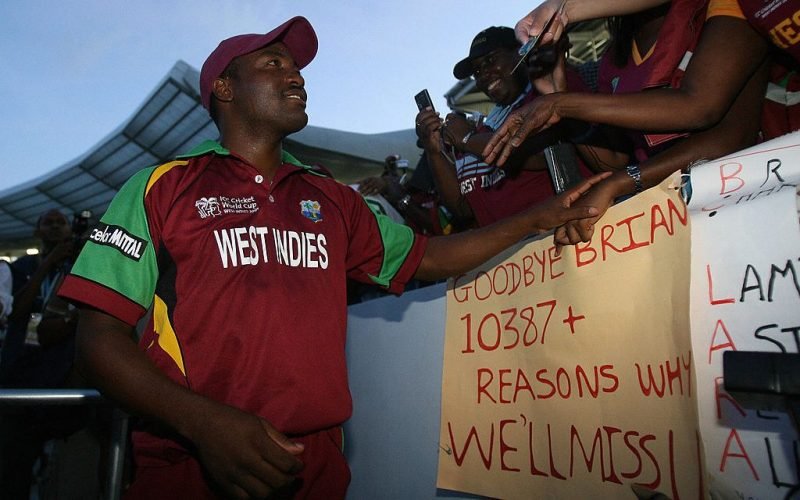 Brian Lara interacts with the fans during his lap of honour after having played his last ODI in Bridgetown, Barbados

But this tournament had nothing for the romantic. With tickets priced out of the reach of most locals, the seven long weeks were devoid of the Caribbean gaiety everyone had hoped for. The hosts played poor cricket throughout, and it was against this backdrop that Lara walked out for the final time, fittingly against his favourite opponents, England, in a dead game. The crowd rises, he acknowledges every corner of the Bridgetown ground – this one, at least, is a sell-out, the people having come to see their genius one last time. The stage is set…

…For Marlon Samuels to hit one to mid-on, call for a single, change his mind, and leave Lara, halfway down the pitch and sprawling, run out for 18. Such a botched event probably deserved it; Lara himself didn’t.

Despite the best strike rate for any modern spinner over 44 Tests which brought him 208 Test wickets, Stuart MacGill was cruelly fated to spend most of his Australian career kicking his heels and waiting for Shane Warne to stop twirling. Finally that moment came in January 2008. With Warne finished, MacGill now had a clear path. But during those years of toil on the sidelines, injuries had taken their toll on MacGill, and halfway through Australia’s very next series after Warne’s retirement, against West Indies, he announced he was going himself. It came midway through the second Test, following a first innings pasting from West Indies’ batsmen, and watching him bowl in the second innings, flexing his shoulder and in obvious discomfort, it was a sad end to one of the unluckiest careers in modern cricket.

It’s the cruel nature of sport that so many high achievers who deserve better make their exit with criticism, not plaudits, ringing in their ears. So it was with England’s most successful ever coach. Seven years of unbroken progress fell apart dramatically in the winter of 2006/07, when Fletcher’s masterplan to retain the Ashes and conquer England’s one-day demons blew up in his face.

“Together, Duncan Fletcher and Andrew Flintoff redefined cricket in England, one quietly, shrewdly; one loudly, brutally.”

Remote, brusque, Monty-hater, never the press pack’s bosom buddy, nor Andrew Flintoff’s; Fletcher made the perfect scapegoat for the fiasco. When World Cup misery followed, Fletcher fell on his sword, and swiftly published a tell-all book that endeared him to absolutely no one. An unseemly end, then, but, in time, history will be kinder to the old curmudgeon.

Oh this is terrible. Boswell was a chunky seamer who failed to make his mark at Northants before moving to Leicestershire, featuring in their one-day side that got to the C&G Trophy final in 2001. After taking four wickets in the semi-final against Lancashire, he was given the new ball at Lord’s in the final, ahead of Devon Malcolm. It took two overs, although rather more than 12 deliveries, for his career to unravel before our eyes.

Opening from the Pavilion End, his first over was a cry for help; sadly unheeded. Nine runs conceded with a wide and two cover drives, and evident problems with the Lord’s slope that would only get worse, far, far worse, in his second, 14-ball over. Vic Marks, writing in The Guardian, summed it up best. “However hard he tried he could not get the damn thing to land on the cut strip.”

The over started amusingly enough, but after five consecutive wides it just wasn’t funny any more. By the 12th and 13th deliveries – the first speared down the legside, the other wobbling wildly down the off – it was just plain harrowing.

Nine days later Boswell’s contract with Leicestershire was terminated, and he returned to league cricket and a career in teaching.

He didn’t know it at the time, but when Shane Bond signed for Delhi Giants of the ICL, he signed away his career with New Zealand. The sadness to this story is that the NZ authorities had originally told him that his decision to play in India’s ‘other’ T20 league would not affect his international career. But the Indian board want to suppress the ICL and if it means collateral damage in the form of a few cricketers, then so be it.

“I forced Dad into buying me tennis wristbands, alternating between black and white on my left forearm, just as he did. I copied the Bond jaunt, the way he wiped his brow, the way he smirked at batsmen”

The BCCI’s bigwigs leant on the NZ authorities, and Bond, pushed into a corner, was told to choose between the deal he’d signed with Delhi and the contract he had with NZ. He refused to break a contract he had signed in good faith, played for Delhi, and that was that. It was the last we saw of him. “I’m disappointed with the way my country’s cricket board treated me,” he said last month, with admirable restraint.

It remains one of cricket’s most horrifying sounds. The pistol-crack that shot out from David ‘Syd’ Lawrence’s kneecap and echoed across the barren stands of Wellington’s empty stadium as the last rites of a dead Test were carried out, and the chilling screams which flowed forth as the pain and the enormity of the damage became heartbreakingly apparent – anyone who was there will never forget it.

In his fifth Test appearance, Syd was busting a gut, as he always did. This time he slipped in his delivery stride, crumpling in a heap in the middle of the pitch as his kneecap obliterated on impact. The dream died that terrible afternoon. Although he reappeared briefly for Gloucestershire four years later, a promising career was finished that day.

“It was tough. I would have given anything to play 50 games for England”

Speaking in March 2007, Syd recalled that fateful day. “It was tough. I would have given anything to play 50 games for England. I was only 27 when my knee went – but I can still count myself amongst the select few to have played for England, and that is something to be proud of.”

Thankfully Syd rebuilt his life in Bristol and now owns a nightclub, balancing stints in the DJ booth with occasional cricket coaching sessions.

Marcus Trescothick had already come home early from two England tours. The first time was in India in spring 2006. Then later that year, in Australia, he collapsed again, just days before the first Test, and took the first flight out of his personal hell.

The public were confused and divided. Society still doesn’t know how to talk about depressive illness. There were many who couldn’t understand why a well-paid sportsman – an England player! – would sacrifice everything because, what, he’s feeling a bit sad? And there was the other camp, with people who had managed to extract their heads from their arses.

We were all sure of one thing: England would be stronger for his presence. And so we laboured under the belief that he could ‘sort himself out’ and get back to bunting spinners over mid-wicket.

It was false hope. The moment when Trescothick knew it was over is recalled in his brutally frank autobiography. The England selectors had gently stated that when he was ready to return, they would be ready to take him. This pre-season tour to Dubai with Somerset would be the litmus test. He had felt good beforehand, strong, determined. He had reassured his Somerset coach that he’d be fine. He got as far as Dixon’s in Terminal 3 of Heathrow airport.

“Hunched-up, sobbing, distraught, slumped in a corner of Dixon’s… unable to board the 9 pm Virgin Airways Flight VS400 to Dubai for which I had checked in alongside my Somerset CCC team-mates, but which I was now in no physical, mental or earthly state to make, hanging on for the pain and terror with which I had become so familiar during the past two years to subside, and let me breathe.”