Ross Armstrong and Alex Odell pick out a selection of hate figures – the characters who’ve raised the ire of some or all of the cricket world down the years.

If there’s a bowler whose ‘exuberance’ really gets under the skin of fans and opponents alike, it’s Sreesanth. And if the constant sanctions for his ‘emotional’ appeals and wicket celebrations weren’t enough to invoke the disdain of the Indian cricket fraternity, then the constant referring to himself in the third person certainly was: “Sreesanth’s way is to be aggressive, Sreesanth will always be Sreesanth”. But in 2013 the Indian cricket family finally gave up on him. He and two uncapped players Ankeet Chavan and Ajit Chandila were arrested on allegations of spot fixing and three months later were banned for life. Which at least will give his ears a much-needed rest from the abuse he regularly provoked from opposing supporters. 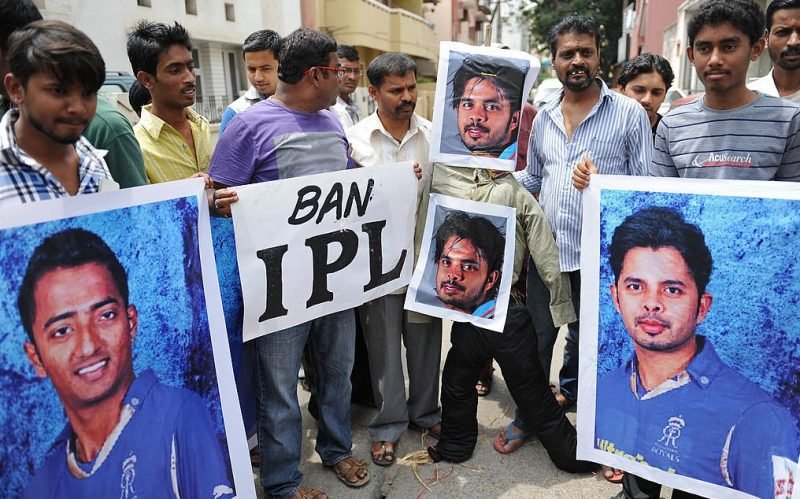 The spot-fixing episode prompted a massive fan outrage in India

Never afraid to make a ‘brave’ decision, Aussie umpire Darrell Hair no-balled Muralitharan for throwing during a 1995 Test match between Australia and Sri Lanka. Cue bad blood and death threats. His relationship with Pakistan wasn’t in rude health either, after he found them guilty of ball tampering in a 2006 Test at The Oval. Inzamam’s green and white army refused to take the field after lunch in protest, causing Hair to remove the bails and declare that they had forfeited the match. Cue (more) burning effigies. “I’m glad he’s finally gone”, said Arjuna Ranatunga upon Hair’s retirement. Asia agreed.

The Australian all-catching, all-run-scoring, always-walking, too-good-to-be-true cricketer was actually booed on his debut. Little did the Brisbane crowd know that young Adam would end his career with 416 behind-the-wicket dismissals and over 100 sixes, a feat still unequalled in Test cricket, when he stepped out on the November 5, 1999 against Pakistan. Instead, fans were incensed at Gilly’s pick over local vet Ian Healy, who had begged selectors to let him play his final game in front of his home crowd. This plea went unheeded, but Gilly gradually won the crowd over with a characteristically aggressive innings of 81 off 88 balls.

“Adam Gilchrist is a player who should be remembered as being even better than his statistics suggest – a big statement, but a true one.”| Ian Healyhttps://t.co/OWFjN65XHa

If you’d expect better from a home crowd during your first game, surely an Indian international legend would fare better during his last? Not so for Sunil Gavaskar in the 1987 World Cup semi-final against England. Why was Sunil the object of such scorn in what would be his last international? What could possibly anger the Mumbai crowd so much that they would boo a national hero? Two words: Bowled DeFreitas.

“Yea Viv, Talk Nah”. Denesh Ramdin is the author of our favourite protest EVER. In four short words, only two of which are even understandable, Ramdin provoked more knights of the realm than a French archer. “He should be humble in himself”, retorted Sir Vivian Richards. Some humble Viv Richards quotes for you: “I love watching Virat Kohli bat, he reminds me of myself”; “There must be something on the line – then Viv Richards is at his very best”; and “I felt I was an artist”. 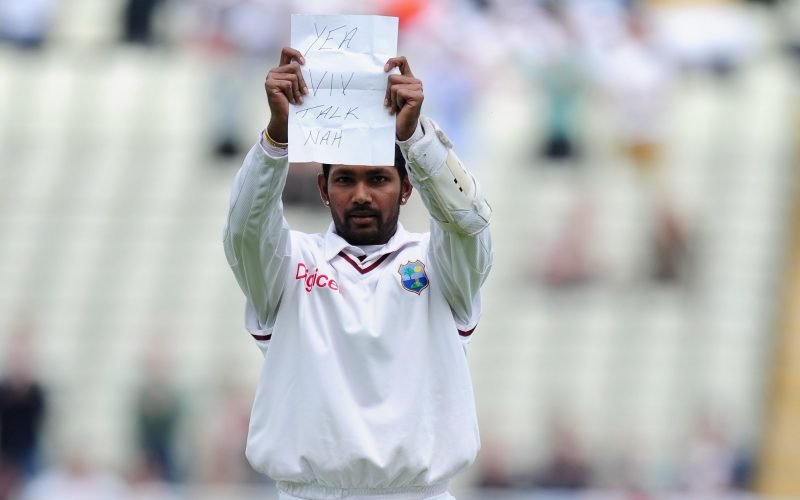 Everyone has an opinion on whether Broad should have walked, but for many otherwise placid England fans, Broad’s decision to challenge Aleem Dar to a game of ‘stupidity chicken’ was, in fact, the least annoying thing he has ever done. The ‘silent assassin’ quote may take top billing, but it was Broad’s next utterance after the first day of the Gabba Test which provokes us most: “Now we’re in for the fight, you’ll see our players stand up”. Yup. Let it sink in. Yup… There it is. Spine-snapping rage. AND my wife fancies him. Shocker.

Lots of people, mainly those that have met him but a fair few million of those who haven’t, don’t like Piers Morgan. The Americans didn’t like him. Then CNN did. Then they didn’t. It’s exhausting. But it’s Morgan’s determination to stir the KP pot that has raised the ire of the English cricketing establishment. And, surely, given that the English cricketing establishment once involved Gubby Allen, that can be no bad thing. “Allegations have been made, some from people outside cricket”, stated the ECB in a press release, responding to Morgan’s Twitter taunts. OUTSIDE cricket? What is that? It’s like saying someone is ‘outside’ maths. Cricket knows no boundaries, ECB. And neither does Piers.

“Despite being gobby to the last, he [Piers] left the net with a broken rib after taking four balls on the body.”

Stepping away from the field of play to explore some famous net gains! 👇https://t.co/CZPHqEc3fy

Textgate, ODIgate, Mooresgate, Reintegrategate, ECBgate. Pick a word, put ‘gate’ after it and there’s probably been a scenario in Kev’s life that will fit it. Throughout his career there have been two constants: England fans’ recognition that he is their most exciting player, and the word ‘ego’. It’s an ego that has defined and ended his career, but also one that started it, as it was Kev’s ego that led him to march into the England dressing room and approach Nasser Hussain after playing for KwaZulu Natal, to ask if he knew any English teams he could play for. “I thought he meant club cricket and almost gave him my brother’s number and told him to try Fives and Heronians, but it turned out he had bigger ambitions than that”, recalls Nass. Ego and ambition. KP should have been a politician.

Greg Chappell and India had a horribly unhappy marriage between 2005 and 2007, with most disagreements between the coach and, well, the whole of India, centering on the role of problem child Sourav Ganguly. At the height of the dispute, with Ganguly dropped from the Test team, parliamentarians organised widespread protests which culminated in the blockading of rail transport in Bengal. Copycat Worcestershire fans are reported to be considering the same tactic to protest Alan Richardson’s departure to become Warwickshire bowling coach. Security at Hartlebury train station is now ‘Code Red’.

How many of you remember this @SGanguly99 stunner, and the Chappell laugh that followed?

One of the many wonderful things about cricket is its rich tradition of effigy-burning, and in the 2001 series between South Africa and India it fell to former England player-turned match referee Mike Denness to discover how Guy Fawkes feels every November. Denness punished no less than four Indian players for excessive appealing, captain Ganguly (yes, him again) for failing to control his players and, heaven forbid, Tendulkar for BALL TAMPERING. Denness retired as a match official soon after, to take up a new role as Prince Phillip’s diplomatic and cultural relations advisor.