Cricket can be a tough and bloody game, by turns hard, nasty, brutish and short. Except, of course, when it comes to actual scraps, when the game becomes more Laurel and Hardy than Ali and Frazier. Jo Harman and Keir Burrows pen down ten of the most infamous ‘handbags and fisticuffs’ episodes on and off the field.

Andrew Symonds made it all look so simple with his no-nonsense approach to field intruders; body checking a streaker at The Gabba with such force that the nudey nuisance never removed his clothes off again. But delivering justice can come at a price. During the 1982 Ashes Test at Perth, Terry Alderman hared after an England fan who had delivered a cheeky slap and tackled him down, dislocating his shoulder and putting himself out of cricket for a year.

9. One joke too many

Graeme Swann’s wisecracks weren’t always so welcome in the England dressing room. As a 21-year-old on his first senior tour, he managed to rub his elders up the wrong way and took one on his generous chin by way of retribution. Having had a laugh at Darren Gough’ expense when a girl in a bar told the England seamer he “looked like a fat Darren Gough”, revenge was exacted later that evening. “Goughie emerged from nowhere,” says Swann in his autobiography, “and as I stood at the urinal, punched me straight in the mouth. Because of my state of inebriation… I fell backwards. Problem was I had not stopped urinating, so there I was flat on my back with a fountain of wee spouting towards the ceiling.”

8. Aussies get their knickers in a twist

Of the many peculiar elements to the relationship between Kim Hughes and Dennis Lillee, a bond that began as kids in the Perth nets when Dennis would lovingly try and skull Kim to death, perhaps the strangest period in their romance took place during the nightmarish tour of Botham’s England in 1981 when Australia managed to lose the unlosable Ashes, and captain Hughes was ostracised by Lillee and his hairy comrades. It culminated in a strange macho-ballet routine one night outside a London bar, when both men somehow managed to undress each other in the act of grappling on the floor. Geoff Lawson said he’d never seen anything like it; Kim, still just about captain of Australia, walked back to the hotel in his pants, while Dennis settled in for another beer. 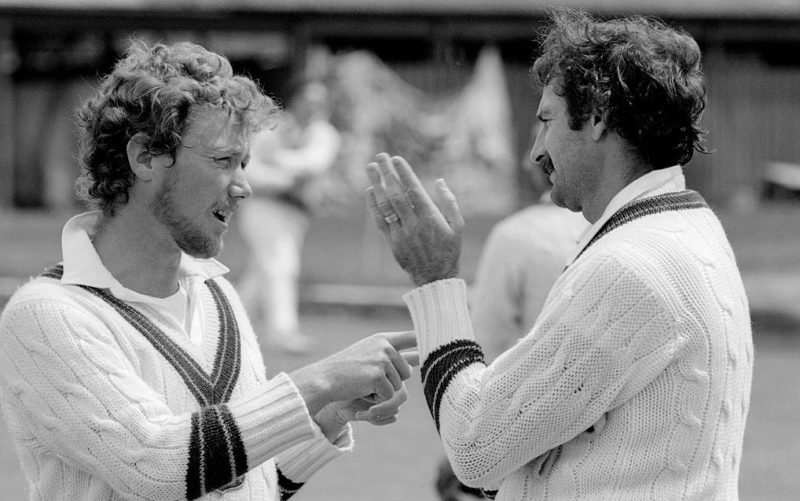 7. Shaun of the dead scary

Ex-England twirler Shaun Udal was regarded as one of the more genial players on the county circuit, but snarls replaced smiles when he was playing for Camberley against Cranleigh in a Surrey Championship encounter in 2003. Already angered after hearing a deaf teammate insulted by an opponent, all hell broke loose when Udal was taunted as a “cheat” for not walking. Shaggy threw his bat to the floor and wrestled the provocateur to the ground, earning a season ban for his troubles.

India was up in arms when ‘King of Bollywood’ and Kolkata Knight Riders owner Shah Rukh Khan was involved in an ugly spat after an IPL clash in May and was consequently banned from the Wankhede Stadium for five years. Khan was accused of being drunk and brawling with security staff but maintained his innocence, claiming he was protecting children who were being “manhandled”. “I just drink socially,” said Khan.

“Never seen anything like it,” declared umpire Dickie Bird as he led Derbyshire and Lancashire off the field during the Championship match at Buxton in June 1975. It was the first time in history that snow had stopped a first-class match, and things were about to get stranger. “Crazy country. What kind of summer is this?” said West Indies skipper Clive Lloyd as he waded through the white stuff and threw handfuls at his teammate Farokh Engineer. A most magnificent play fight followed as Super Cat and India’s Brylcreem Boy were reduced to frolicking in the Derby snow.

From one snow-related incident to another, only this incident was much less savoury. Having struck Terry Jenner square on the bonce during the 1971 Ashes clash at Sydney, England firebrand John Snow returned to the fine leg fence whereupon one of the baying locals grabbed him by the arm. Snow tried to pull away but the drunken middle-aged man held on and an ugly confrontation followed. Skipper Ray Illingworth decided enough was enough when cans and bottles were hurled in Snow’s direction and marched his troops off the field.

Several cricketers over the years will have been sorely tempted to take matters into their own hands with India’s madcap paceman Sreesanth. That he ended up taking a blow to the face came as no surprise; that his assailant was a national teammate came as a shock. Especially for the man himself, who couldn’t hold back the tears when Harbhajan Singh slapped him round the face for saying “hard luck” after Kings XI Punjab defeated Mumbai Indians in the 2008 IPL. Bhajji claimed it was “not such a big issue” but the BCCI disagreed and delivered a slap of their own in the form of an 11-match ban.

“Jones! Bowden! Kasprowicz the man to go,” could have been “Jones! Bowden! But Kasprowicz has reviewed straight away… I think his glove might have been off the bat here, that’s an excellent use of DRS”.@Ben_Wisden lists down 10 DRS what-ifs.https://t.co/dWuZoPiwSm

Don’t be fooled into thinking punch-ups are confined to the modern era. Back in 1879 the Sydney Cricket Ground was the setting for an almighty hullabaloo when home favourite Billy Murdoch was controversially given out in a tour match between New South Wales and England. Two thousand spectators stormed the pitch and England skipper Lord Harris was struck with a whip in the ensuing melee before teammate and keen amateur boxer ‘Monkey’ Hornby took retribution. Harris stood firm, moustache bristling, but an unfortunate English naval captain in the crowd suffered the indignation of having his top hat pulled over his eyes while the locals verbally abused him. The riot led to a breakdown in Anglo-Australian relations. Not for the last time…

Cricket’s most infamous on-field confrontation saw Pakistan’s street-fighter Javed Miandad go toe-to-toe with Western Australian wildman Dennis Lillee in a scrap that threatened to end in hospitalisation for either or both. In fairness, Lillee had it coming; sidestepping to block Miandad’s path as he ran between the wickets before aiming the most pathetic of kicks in his direction. Never one to turn the other cheek, the Pakistan captain exploded, wielding his bat above his head like a crazed woodcutter before the umpire courageously intervened.