When the match official, flanked by captains Dave Gregory and James Lillywhite (jnr), supervised the coin toss in the first ever Test match, spectators knew they were in for something special. Five minutes later, after the singing of Jerusalem and an advert break, Charles Bannerman hit the first runs in Test cricket. By the end of the innings, he had scored 165, with 18 fours, but was forced to retire hurt after breaking his finger. Bannerman scored a whopping 67 per cent of his side’s runs in the innings, which remains a record to this day. His injury allowed him to score only four runs in the second innings but Australia still claimed the inaugural Test victory by 45 runs.

Charles Bannerman, who made Test cricket’s first century for @cricketcomau against @englandcricket in 1877, died on this day in 1930.

This won’t necessarily be the match that people remember from Pietersen’s debut Test series but the manner in which he strode out to the crease and played his shots suggested that the boy with the rubbish haircut had something a little bit special about him. In an up and down affair KP, nicknamed FIGJAM by the Aussies, demonstrated that, actually, he was pretty damn good as he scored 57 and 64 – England’s highest score in both innings. It was his uninhibited style of play and youthful aggression that so stood out. English spectators were not accustomed to seeing their cricketers hit Warne and McGrath for six, so much so in fact that they’ve never quite been sure what to make of Mr Pietersen ever since.

It’s funny looking back on Jonathan Trott’s arrival into the Test team knowing that we knew so little about him back then. England supporters’ only previous look at him had been two ill-fated T20s against the West Indies in 2007 where he averaged 5.50. Did we expect him to thrill, excite and raise pulses? Who knows? What we did expect, or at least hope for, was runs and good old Trotty delivered that. He made an encouraging 41 in the first innings but then the real magic came. Coming to the crease at 39-3, Trott began by adjusting all the Velcro in south London, scratched his now infamous trench and made a superb 119.

A hundred on debut to help win the Ashes?

The Aussies love themselves a larrikin, and they love people who score runs in cricket matches. Doug Walters was both of these. Said to love a drink the night before a match and apparently able to remain sober regardless of the amount imbibed, the little fella scored a glorious 155 on debut. Like many Australian middle-order players after him, Walters was a real stylist at the crease, with a range of shots around the wicket he made look easy. In his first knock, he gamboled to the crease with the score at 125-4 and departed the scene 306 runs later having announced himself as a real favourite for years to come.

Bowlers on debut tend to like a good, consistent start. They want to find their line, their length and generally keep things tight. Bob Massie did a lot more than this. In the first innings, he took 8-84, then bettered it to take 8-53 second time round. His figures of 16-137 are the second-best figures on debut ever but are made even more remarkable by the fact that Massie played only five more Test matches. Massie had asked for a rest after taking his first three wickets but captain Ian Chappell kept him on. In the second innings he opted to bowl round the wicket and in front of a packed Lord’s bowled his team to victory.

England were, as ever, up against it when Graham Thorpe was selected to make his debut in 1993. He then went on to do what so many middle-order debutants neglected to do when picked for England and score some runs. Indeed the diminutive left-hander scored England’s first century on debut in 20 years. Such was the dearth of English debutant success it was almost un-English of Thorpe to enjoy some success. Mark Ilott, Martin McCague and Mark Lathwell all made their first England appearances in the same match, their performances were far more patriotic…

While conditions were certainly in the bowlers’ favour at Trent Bridge, in 1981 it would be fair to say that Terry Alderman made the most of them. With dark clouds looming above the ground and a moist, green pitch it was a match that would be all about the seamers. Alderman allowed the ball the opportunity to swing, pitching it up, and took four wickets in the process as England were rolled out for 185. In England’s second knock it was more of the same but this time the debutant went one better to claim a five-for. For younger fans it was a little bit like Michael Beer at Sydney in 2011, just much, much better.

Terry Alderman took a staggering 42 wickets in his debut Test series, against England in 1981.

His efforts ensured he was named a @WisdenAlmanack Cricketer of the Year. https://t.co/bEnzwy1iMJ

Younger than his brother Steve by four minutes, Mark was forced to watch his brother make 42 Test appearances before he was given his first opportunity in 1991. Unfortunately for family Waugh, Mark’s inclusion came at the expense of Steve but the younger, more attractive batsman repaid the selectors’ faith with an exquisite 138. Both, of course, would go on to star for the Aussies but for sheer impunity and for a demonstration of true ability regardless of pressure, Mark’s debut was always the better of the siblings’ efforts. Somewhere in England, a young Jimmy Ormond was probably watching and preparing one hell of a sledge.

By the start of the 1993 series, and aware of a blond bombshell smoking B&H in the other dressing room, England unveiled their own spin option for the Old Trafford Test. With his journeyman aura, pre-delivery cough and baggy Tetley Bitter shirt, ‘Screaming’ Pete was an unlikely star, but with six good Aussie wickets in the first innings – among them Taylor, Border, Boon and Steve Waugh – English fans had found themselves a new cult hero, and they still hadn’t seen him bat. By the end of the match, Such had eight wickets, a few bruises, and the love of a charmed nation. 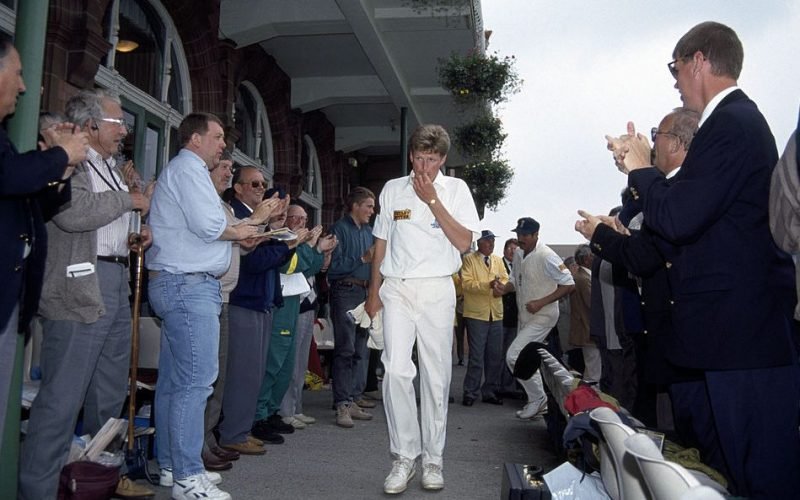 Grimmett brought out his full array of leg breaks, googlies, top-spinners and flippers to embarrass the old enemy. Like so many batsmen representing England since, the line-up in 1925 was rendered hopelessly bamboozled by Grimmett’s intricacies and skill. Born and raised in New Zealand, Grimmett hopped over to Australia in his early Twenties and never left. Grum, as he was affectionately known, was a real master of his art and spoke often of the importance of practice. He went on to enjoy a nine-year Test career, with many memorable moments along the way, but it doesn’t get much more special than 11 wickets on debut.