From Botham-Chappell to Pietersen-Warne – Daniel Brigham pens down some of the most memorable fights, feuds and fall-outs.

Shane Warne has called the confrontation between Steve Waugh and Curtly Ambrose “the worst incident I have seen on the field”, and this is a man once played against an England attack of Martin Bicknell, Mark Ilott, Peter Such and a 40-year-old John Emburey. In 1994/95, with West Indies 1-0 down against Australia and their grip on the long-held title of the world’s best side slipping, Ambrose came out fighting at Port of Spain. With Australia’s first innings crumbling, a typically obdurate knock from Waugh was frustrating Ambrose. After a series of explosive bouncers, Ambrose eyeballed Waugh. With Ambrose going for the silent-but-deadly treatment, Waugh retaliated with the verbal-but-unsubtle treatment: “Why don’t you go and get f****d.” A furious Ambrose had to be dragged away and he responded with a five-for as Australia were bowled out for 128. Ambrose later admitted that “In that heat of the moment I really wanted to physically beat him”.

Kevin Pietersen certainly isn’t the first flamboyant, outcast batsman to use an autobiography to try and settle a few scores. KP’s tome, however, is pure Enid Blyton compared to the 2010 autobiography of South Africa’s World Cup-dropping Herschelle Gibbs. Drinking binges, match-fixing, drug-taking and hotel orgies added 50 shades of grey to the normally dull world of sporting autobiographies. In the rare moments that he broke off to talk about cricket, Gibbs accused Graeme Smith of being too powerful as captain, of effectively bullying coach Mickey Arthur and of forming cliques with the dominant personalities in the dressing room. Smith shot back with “I think it shows more about his own insecurities than anything else”, and Gibbs never played for South Africa again. 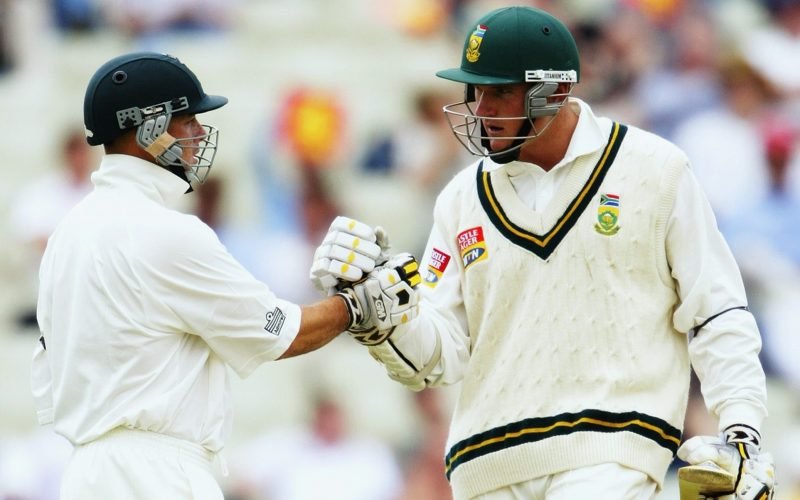 While Alastair Cook has been shot at by the press, savaged by Shane Warne, and, according to the ECB’s leaky dossier, accused of being “tactically inept” by Kevin Pietersen, Kim Hughes would have considered facing that amount of criticism as one of his better days as Australia captain. Hughes had always attracted ill-feeling from teammates – including having dead animals dumped in his cricket bag at his first club – and the Australian dressing room was brimming with mutiny in the early 1980s, led by macho heavyweights Dennis Lillee and Rod Marsh. Tensions reached a very public nadir at Port of Spain in 1984 when feisty and furious fast bowler Rodney Hogg, steaming that Hughes wasn’t giving him the field he wanted, threw a punch at his captain. A year later, both of their international careers ended ignobly but perhaps fittingly on the Australian rebel tour to South Africa in 1985.

Shane Warne and KP’s friendship has been on and off more times than the Champions Trophy. It’s all about ego: when not flattering each other’s, they’re attacking it. Warne even got the old pots and kettles out to dub Pietersen “the walking ego” but it was the Aussie who allowed his own ego to get the better of him at Brisbane in the first Test of the 2006/07 Ashes. With Australia finding wickets hard to come by in England’s second innings, Warne’s frustrations erupted and he threw the ball at Pietersen, who defended himself with his bat before calling Warne a “f**kwit”. It may well be the most succinct thing KP has ever said.

6) FIGHT! Inzamam-ul-Haq and a rude fan

If you saw a man who bared an uncanny resemblance to a potato, you wouldn’t point this out to him would you? Firstly, it’s rather unkind. Secondly, if a man looks like a potato it’s likely that he’s going to be on the rather large side. And, as anyone who’s seen Marlon Brando in Apocalypse Now will know, you don’t want to make large men angry. So when Indian cricket fan Shiv Kumar Thind started calling Inzamam-ul-Haq a “mota aloo” (fat potato) while he was fielding during an ODI in Toronto in 1997, he was asking for trouble. Especially as he was using a megaphone to air his views. Inzy finally snapped and, grabbing a bat that had suddenly and rather suspiciously appeared on the boundary, bulldozed into the stands wielding his weapon. With the megaphone-warrior seconds from a potato-mashing, security and spectators flocked in to restrain Inzy.

“It was a shocking moment for all of us.”https://t.co/QnrQWrPQ41

As insults go, it’s certainly imaginative: “He’s probably … swallowed a sheep or something”. Shane Warne, who often looked as if he had had a bellyful of farmyard animals himself, was talking about his similarly rotund nemesis Arjuna Ranatunga. Their feud went back to Sri Lanka’s tempestuous tour of Australia in 1995/96, when Muttiah Muralitharan was called for no-balling by Australian umpire Darrell Hair. A year later it escalated. With Sri Lanka closing in on a historic World Cup Final victory, Warne was bowling at Ranatunga in the battle of the bulge. A flipper turned into a full toss and Ranatunga launched Warne into the stands. Since then, Ranatunga has called Warne overrated while Warne has returned the favour by saying Ranatunga is “without any question … the most difficult opponent I have come across.” And, by difficult, he means difficult git.

If your best mate has to punch you in the face to restrain you, then you know you’ve probably gone too far. In 2006, a month before Zimbabwe’s Mark Vermeulen took a lighter to the thatched roof of Harare cricket academy and set it ablaze, he was playing in the Central Lancashire League for Werneth. As his side were slipping to defeat away at Ashton, Vermeulen grew increasingly frustrated with a boisterous home crowd. So frustrated that he picked up the ball and pitched it into the crowd. It didn’t end there. In fact, it really jumped up a notch. Vermeulen grabbed a boundary marker – a spiky, pointy boundary marker – and threatened to charge into the crowd. As officials and players rushed over to bundle him to the ground, it took a right hook from his best friend to finally fell him.

Bill O’Reilly, the greatest Australian spinner never to have dated Liz Hurley, was apparently never shy of telling people that the Don Bradman Appreciation Society would fit inside a telephone box. The great Australian side of the 1930s and 1940s was, O’Reilly claimed, often divided on sectarian grounds between the Catholics and the rest. A strict Protestant, Bradman was respected – how could you not respect a man with an average hovering around 100 – but rarely liked by his teammates, and he held a long-lasting grudge against O’Reilly. “You could say we did not like each other, but it would be closer to the truth to say we chose to have little to do with each other,” O’Reilly wrote in his autobiography. “Bradman was a teetotaller, ambitious, conservative and meticulous. I was outspoken and gregarious, an equally ambitious young man of Irish descent.”

In the early 1980s, Javed Miandad and Dennis Lillee were box-office. Both moustachioed, both flamboyant, both approached cricket with electricity in their step. In the first Test of Pakistan’s 1981/82 tour of Australia, the visitors had been set an improbable 543 for victory. Miandad came in at 27-2 with Lillee in full nostril-flaring mode. As Miandad ambled for a single, Lillee deliberately stepped across his path and was shoved out of the way before following him down the pitch and landing a side-footed kick to the batsman’s thigh. Miandad raised his bat like an executioner, Lillee raised his fists like a Victorian boxer and umpire Tony Crafter had to separate them before a bit of Tom and Jerry could turn full Tarantino.

Between them, Ian Botham and Ian Chappell have played 177 Tests, scored 10,545 Tests runs, competed in 15 Ashes series, and sported some truly magnificent furry critters above their top lips. So you would think they might have something in common to talk about. Instead, 37 years after they first came to blows in a bar-room brawl at the MCG, the moustaches may have gone but the flames of animosity show no sign of burning out. Like a cricketing Stalin v Trotsky (or Blur v Oasis, depending on how you like your cultural references), Chappell and Botham have spent the last four decades sniping, fighting, accusing and denying. Chappell says that Botham is “peddling lies and fairy-tales”; Botham says Chappell “worries me about as much as a cold”. Both men are grandfathers.