From John Edrich to Mark Taylor, Richard H Thomas pens down the best Ashes southpaws – the men who proved that left is right.

These days he is perhaps known for his diligent work as an ICC Test match referee, and the siring of perhaps England’s next star quick. Overall there have been prettier players with more sustained records, but his three centuries in successive Ashes Tests for Mike Gatting’s 1986/87 tourists plants him firmly in our list. His 162 at Perth against Geoff Lawson and Bruce Reid was the best of his four Ashes tons, many of his 25 boundaries being spanked regally through extra cover. His recent bravery in the Lahore terror attack underlined his strength of character, but lovers of irony would reflect that in his current role of disciplining administrator, he may well have found the occasionally truculent Chris Broad of 20 years ago quite a handful. A classic case of poacher turned gamekeeper.

No danger of nepotism here.https://t.co/4hEqyxtWYI

Losing the tops of two fingers as a youngster couldn’t stop the diminutive Lancastrian becoming a highly versatile performer, and he was elevated to national hero status on the Bodyline tour when, to the consternation of medical staff, he got up from his sickbed in a Brisbane hospital to make a match-winning 83 in tropical conditions. Five years later, he flailed the Aussies for 216 at Trent Bridge and followed it with a rearguard 99 at Lord’s, rescuing an early collapse with Wally Hammond. “If he ever sniffed a crisis in the offing,” said Ronald Mason in his book Sing All In A Green Willow, “… he made straight for it, and as often as not left his name upon it for all time.” He is second only to Bradman in terms of batting averages in Ashes Tests.

With his crouching stance and leg-side technique, Hill entered Test cricket quietly, but in his seventh Ashes match made an astounding 188 at Melbourne in 1897/98, so startling within the context of a low scoring game that former Australian captain Tom Horan said it was an innings that would be talked about “when the smallest boy who saw it will be white with the snows of time.” He went on to become a popular Test captain, and only eight men have scored more Ashes runs. He forged a career in horse racing administration after selection-meeting fisticuffs with colleague Peter McAlister accelerated his retirement from Tests.

“He was born to rescue”

A Yorkshireman of few words, as JM Kilburn observed, Maurice Leyland was “aware of his own distinction in cricket but he made no parade of it.” Undoubtedly broad in the beam and with a style sturdy rather than serene, writer Denzil Batchelor stated confidently that there was no left-hander between the wars whose back Australia were more pleased to see. His seven Ashes tons were generally made in a crisis, although the biggest (187 in the 1938 Oval Test when Hutton got 364) was made in more relaxed circumstances. “He was born to rescue” wrote RC Robertson-Glasgow, and late one afternoon he was engaged in such an attempt, when 300 behind he was joined by England’s number nine, Walter Robins. As his partner attempted a perilous single, Leyland allegedly whispered dryly as he passed: “Steady on Mr. Robins, we don’t have to get them all tonight.”

When the young Victorian began his Test career with six centuries in his first 13 innings, the critics began mentioning him with the same hushed reverence as the likes of ‘Bradman’ and ‘Archie Jackson’. Harvey didn’t disappoint throughout his career, and with half a dozen centuries against the old enemy. Undoubtedly, his finest moments were reserved for Ashes matches. Perhaps the highlight was his 112 at Headingley in Leeds as a 20-year-old when he became the first left-hander to score a century on an Ashes debut as part of Bradman’s Invincibles tour of 1948. Short in stature and one of the first to make athletic fielding an important second dimension to his game, he is part of Australia’s official Test Team of the 20th Century, and as David Frith once wrote, “he always had sunlight gleaming across his cricket.”

Happy 91st birthday to @cricketcomau great Neil Harvey. When he was a @WisdenAlmanack Cricketer of the Year in 1954, Reg Hayter wrote this fine profile – https://t.co/vA4xq7mBWj #cricketeroftheyear

As a diplomatic successor to Allan Border, Wisden remarks that after Border had stopped his team losing, Taylor “made them into winners”. As a classy opener his record bears scrutiny with the best. He made over 800 runs on his first Ashes tour in 1989, but it is his career-saving return from a wretched bad patch (no century in 18 months and 14 Tests) at Birmingham in 1997 that is perhaps most remembered. A determined 129 after a scratchy first innings made a statement about his character that a team of psychiatrists wouldn’t have bettered, further underlined when modesty prevented him from beating the then highest Australian Test score when he declared himself on 334 – the same score as Bradman’s best – against Sri Lanka. A consummate slip fielder, he had an agility that belied his slightly unkind nickname of “Tubby”. 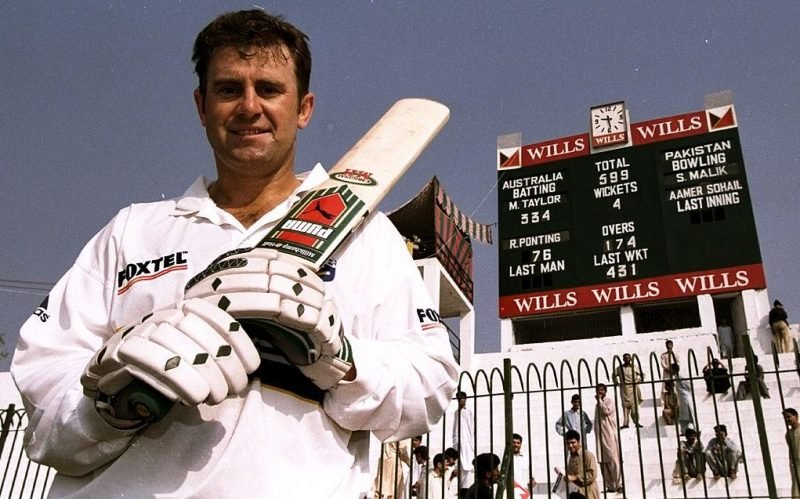 The iconic one! Mark Taylor after his record-breaking 334*

In his book about Norfolk’s famous Edrich cricketing dynasty, Ralph Barker writes that John was usually considered “a plodder who might come in useful in hard times.” Surrey colleague Pat Pocock called him “probably the least selfish great player I ever knew”, and so it was that Edrich avoided top headlines, despite 103 career centuries and the sixth-highest Ashes run aggregate by an Englishman. A sound, straight technique was matched by a temperament that enhanced his durability – he forgot the last ball well before he played the next. He wouldn’t, though, forget Lillee breaking two of his ribs in 1974/75 and the peppering he got from Michael Holding at Old Trafford in 1976, but he dealt with that just as bravely as he no doubt handles his continuing ill health.

A good moment to revisit David Frith’s profile when AB was a Wisden Cricketer of the Year in 1982.https://t.co/XyWuEaAW58#wisdencricketeroftheyear #wisdenarchive

AB played more innings against England than anyone, and with an average two runs better than Hobbs and almost five better than Hammond he has to be in the ‘all time great’ category. His batting was even more worthy considering he captained Australia when the usual rich resources were less plentiful, and many of his heroics were performed in parallel with marshalling an under-performing side. In one such artificially weakened side on the unsuccessful tour of England in 1985 he was by far the top batsman, with over 1,300 runs and eight centuries, including two big ones in the Tests. The potential world-beaters that he handed on to Mark Taylor have hardly stumbled since. Appropriately, the medal for the best Australian player of each season bears his name.

Like Neil Harvey, a surviving member of Bradman’s Invincibles, Morris was a left-hander of elegance and a man of quality. Like Harvey too, he was key to the ’48 series victory (he scored three of his eight Ashes centuries on that tour) and is a member of the Aussie Team of the Century. As a trusted lieutenant to Bradman, he was a perfect foil for his sometimes brusque captain – John Arlott called him “charming, philosophical and relaxed”, while uncompromising fellow Aussie Tiger O’Reilly described him pithily as “a man worth knowing”. The most delicious of compliments for the man who scored a century in each innings of his first-class debut however came from Denzil Batchelor in 1953: “The handsomest left-hand bat in the game today – and probably tomorrow.” Many old timers would agree.

“A laid-back, charming Goldilocks,” according to great sports writer Frank Keating, “… with an ambassadorial approach to the world.” Since he said hello to Test cricket by cuffing his first ball for four, no cricketer has been called ‘relaxed’ or derivatives there of more often than our man Gower. Genteel, polished and never a disciple of the Jardine leadership method (Frances Edmonds, wife of England’s left-arm spinner Phil, called him “every inch the perfect English gent”), as captain he found the right blend in 1985, gave his team the freedom to get on with it and was rewarded with a thumping series win. He may have been laissez faire as a leader and perhaps too pleasant, but it was as the most charming of lefties that people remember him, and he is unusual in keeping both the aesthetes and statisticians happy; of Englishmen, only Hammond and Hobbs scored more than his nine Ashes centuries, only Bradman, Hobbs and Border scored more runs, and his three big hundreds (including a double) in his watershed year of 1985 were instrumental in the series win.

Despite the style and the substance of his batting, he was sometimes unfairly pilloried for his judgment outside the off -stump, although this was trifling compared to the panning he got for the infamous Tiger Moth salute during a tour match in Queensland in 1991, which hastened the end of a distinguished career. As Sky anchorman, he is assured of continuing Ashes involvement, but his learned and cultured tones can never replace the joy of watching him bat.