It’s a strange world out there and cricketers are no different. From David Shepherd’s Nelson to Steve Waugh’s hankie, here are some of the game’s quirks, tweaks and eccentricities.

1. The world that Jack built

Welcome to the wonderful world of Robert Charles Russell, or ‘Jack’ to you and me. One of the more notable oddities attached to the genius stumper and lauded painter involves a touring diet of tea, biscuits and suitcases full of baked beans. Twenty cups of Rosie per day was standard. He would dip the tea bag in once, and then hang it on a nail, ready for the next cup. So the story goes, in 1989 at The Oval, he used one bag for a whole Ashes Test match. He also likes Weetabix, soaked in milk for exactly eight minutes. He listens to the Gloucestershire Regimental Band in his car, which he drives whilst wearing a sleeping bag with the bottom cut out, to avoid the chill. No journalist has his phone number, or his address. One story goes that when a hack was granted an interview, he was summoned to his house blindfolded. His wicket-keeping hat was cut and shaped specifically to line up the ball, and he refused to change it, despite the English authorities demanding he removed it. He once accidentally burnt it in a Barbados hotel room (don’t ask), and Graeme Hick, who was sharing with him (and his suitcases of beans), recalls that he was nearly in tears.

Stewie was an example to us all. Straight-backed, dutiful, proudly patriotic, he was everything the punter wanted from his cricketer. You see, they’re role models, looked up to by young lads in scruffy caps and slingshots in their pockets. That’s why Stewie’s pre-shot routine was so inspirational. Okay, from the top: after a responsible leave, he watches the ball go past, waiting for the ball to ‘go dead’. When it’s right, and not before, he kicks his heels together and ventures out of his crease. Mid-pitch ‘gardening’ ensues. He returns to his crease. The bowler is back at his mark. Stewie settles, and bangs his bat on his toes, before scraping the ground around him with his blade, like a Sunday School teacher sweeping the floor after a particularly wild fete. The world game’s most consistent bat twiddle comes next. Two hundred twiddles per second. And then as the bowler starts his run, the final piece. Stewie touches the back of his neck, as if to put a rogue shirt label back in its rightful place. He did it every time. No one knew why he did it. But it looked right. It looked English. It’s like he was saying, ‘Kids, don’t do drugs, do batting.’ See also Robin Smith’s calisthenics routine, Allan Border’s wide-eyed, post-hibernation-hedgehog walk to the crease, and other prime examples to today’s lost youth. Or see David Gower, who just stood there with a half-smile, weight on one foot, waiting for the next ball.

Before Dwayne Leverock hove into view, David Shepherd was the man for whom the phrase larger-than-life appeared to have been invented. And umpire Shep was a joy, a genuine character loved by all and a damn fine decision-maker to boot. Even if he hadn’t done that quirky jump every time the score was on 111, 222, 333, 444, 555, 666 (explain that one, West Country folk), 777 etc., he would have had a place in the hearts of cricket-followers for his transparent integrity and good humour. But the quirk made the man, transporting our more excitable commentators, we’re looking at you, Mark Nicholas, into paroxysms of chuckle-filled delight every time the score ticked round to Nelson (why it’s called that is even murkier than the skipping tradition – lost eye, lost arm, mythical lost leg? three major victories – won, won, won?). So why did he do it? Well, 111 (and multiples thereof) is apparently unlucky (it was for the Aussies at Headingley in 1981, thank God) and it’s a tradition Shep picked up playing village cricket as a kid in Devon. He says: “You could just lift your feet off the pavilion floor if you weren’t in the middle, but if I was on the field of play I would just jump or hop.” And he boldly continued the tradition on the international stage – good for him.

Selected by West Indies to face England in 1986 , Carlisle Best deposited his third ball, bowled by Botham, into the stands. From that start there was only one way to go. A spectacular 164 at Bridgetown three years later, also against England, was a high watermark of a career largely remembered for a series of weird affectations rather than unfulfilled talent. A nervous starter, Best would offer up a full soundtrack as he batted, a running commentary accompanied by smiles and coquettish giggles whenever he struck a boundary – bowlers loved that. And probably his one legacy to the game was the bizarre act of taking guard by hammering the bail into the ground with the top of his bat handle. It was weird then and it’s weird now, but the method has still been adopted by current Windies stars Ramnaresh Sarwan, and cult-hero Shiv Chanderpaul, a man whose crabby technique demands its own act in cricket’s theatre of the absurd. 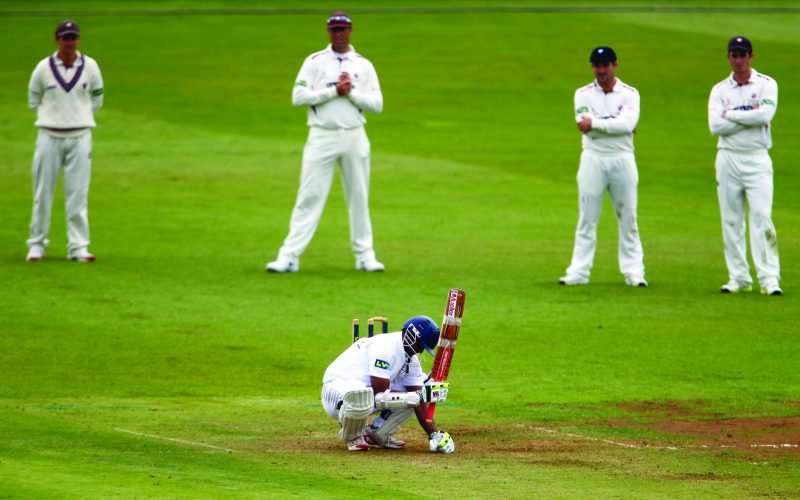 It’s probably a happy consequence of that post-war boom-time when nothing else seemed to matter overmuch, but those old school eccentrics really knew how to deal with the game’s pesky hassles. Our personal favourite is Kent captain Colin Cowdrey, who used to turn up at Canterbury a few minutes before the start, already decked out in his whites. He would then clamber out of his flash car and stroll straight onto the pitch to take his place at first slip after one of the underlings had tossed up for him! And then there’s Ted Dexter, who would react to a tense Test match by practising his golf swing, time after time, or Australia’s Keith Miller, who would tell his fielders to “scatter” as a captaincy direction. Or maybe Geoff Boycott’s medium-pace-dobber bowling technique, replete with cap, sometimes worn backwards? The ploy was designed to unsettle the batsman, but when he tried it in the 1979 World Cup final, Viv and Collis King whacked him to all parts. Cap or not, a pie is a pie. And what’s more, Geoffrey would say so himself.

It was alleged that Derek ‘Rags’ Randall of Notts and England could spot movement behind the bowler’s arm normally only detectable by use of a microscope, equipped with a fisheye lens. Games were known to be stopped by Randall, bucked from his concentration by the merest crowd transgression.

And he was an unbelievable fidget. A typical pre-delivery routine would run as follows … (Bowler walks back to his mark), Randall already down in his stance, extends a right arm high above his head to release his shirt sleeve, taps his bat at the crease, touches his helmet, adjusts his box, then pulls his front pad into a more comfortable position. Repeats. Twice. (Bowler turns at the top of his mark.) Randall taps, touches box and then left pad. (Bowler on his way in) Randall taps, touches and touches again. (Bowler in delivery stride) Randall pulls away at the last second, momentarily distracted by something happening in ‘his eye line’ atop the third tier of a grandstand situated at deep extra cover. No wonder Dennis Lillee tried to kill him…

Odd one, this. A relatively new phenomenon, pioneered by Abdul Razzaq, and ignored by everyone else. When Abdul bats, he wears his helmet, just like a normal regular guy. But in his wisdom, he has chosen to wear his cap back-to-front, underneath the lid, with the brim protruding out the back and covering his neck. It could be a homage to hip hop, or a novel way to protect the back of his bonce. Either way, it’s strange. But it might just be genius.

Steve Waugh? Why he’s so hard, he’d spit on your poncho! He’s never paid for a pint of milk in his life, never been given the bum steer, never had to talk to be heard, let’s face it, the man’s tougher than the meat at Morrison’s! Who remembers that Test back in 1995, when Curtly went after him, staring him out, dwarfing him right up close, and Waugh just stood there, dead still, not backing away an inch but conceding a dozen? Who remembers that? Waugh made 200 that day, and a man was made. And who remembers the end of it all, when the sated, indefatigable gladiator wiped the grit from his sweat-soaked brow… with, what’s this? A dinky red hankie! A red flannel! And wait! There it is, every time he bats! A red rag, a comfort blanket no less, for cricket’s most leathery man! So Dave Gower wore blue socks and Sachin favoured red ones, but they’re flowery strokemakers! This is Stephen Waugh! I mean, have you ever seen Lee Marvin swing out of a saloon bar with a pack of Kleenex in his back pocket? Well, have you? Exactly.

It might be a hackneyed cliché born of lazy stereotyping, but it has to be said, and don’t pretend you haven’t, that the West Indians are a pretty cool bunch. It’s why their ongoing love affair with cricket is so hilarious. And it’s why, specifically, their incongruous love of M&S-style short-sleeved jumpers brings the house down. One offshoot of this bizarre dalliance is their insistence on wearing said short-sleeved jumpers in 40 degree temperatures – in Mumbai, as locals wilt in the shade; in Perth, on the Fremantle Doctor’s day off; even at the Brit Oval, with climate change in full swing. In particular we’re thinking of Carl Hooper and Phil Simmons, who spent the whole of the Nineties in jumpers, and still looked good for it. The problem of course, is that these wheezing English kids got hold of the craze, and by insisting on wearing their woolly in mid-summer, invariably finished the match on a drip.

Cricket is a strange game, played by and watched by strange people. Always remember this. You are not alone. Cricket is both a breeding ground for strangeness, and a haven for the already strange. This strangeness, of course, is central to its genius. You want proof, stranger? You want facts?

Don’t move from your seat during a tense partnership. Get your feet off the floor when the scoreboard reads 111. Or 87 if you’re an Aussie. A dark fear of odd numbers, like Hitler’s terror of the number seven. Stepping on to the pitch right foot first. Taking guard before every single ball. Bat scraping, crease scratching, first/last out from the dressing room, painting three dots as a bowling mark, wearing a floppy hat under a Tory government…we could go on.

And then there’s the universal superstition, the one even Stevie Wonder couldn’t write a song about: the fabled, deeply sinister ‘left pad on first’. Even those cricketers not of a superstitious nature find themselves reaching for the left pad. They know not why, but they do it anyway. All cricketers put the left pad on first, presumably to avoid the curse of the right pad. All that is, except one. Somerset’s Arul Suppiah, take a bow, as he insists on right pad first.