Back when he was just an ex-cricketer and not England’s national selector, Ed Smith reminisced about his professional career in issue 8 of The Nightwatchman.

The rhythm of a cricketer’s year sets the civilian calendar upside down. Spring brings anxiety as much as excitement, pressure as well as promise. Early dawns and newly cut grass announce the return of being judged – your game will soon be dissected, your character tested, your scores published. Cherry blossom and the smell of awakening signal work, not play.

High summer does not mark the sleepy indulgence of holiday but the peak of the working calendar. On cloudless July days, when offices empty suspiciously, cricket seasons are won and lost. In early autumn, as the working world revs up after its long sleep, a cricketer winds down; soon the pressure will lift, and your time will be your own again. Winter is recast as summer: a time to reach an accommodation with missed opportunities, to play, experiment and escape.

I have known these things for many years, almost as long as I’ve lived. But I’m surprised they stay with me, even now. After all, there will be no big games this year, no pressure, no calendar of professional matches. Cricket has been replaced by writing. The batting crease has become my study, my cricket a keyboard. And yet the old feelings, brought on by the smell of the grass or the sound of a spring dawn, remain just as strong. A baseball man – cricket’s cousin sport – put it best. “You spend a good portion of your life holding on to a baseball,” Yankees’ pitcher Jim Bouton reflected, “before you realise it’s holding on to you.”

Cricket, I am now learning, will always inform my experience of the seasons, especially those spots of time when nature mixes with memory. A farmer may sell his land and yet retain the seasonal body clock that once defined his life. A university don can move out from the quadrangle where he spent his working life and yet still half-wake at every hour through the night, expecting to hear the comfort of college bells.

By the end of play, when the temperature has dropped to a few degrees, your face glows with rustic ruddy simplicity

So it is for me as an ex-cricketer. When a northerly wind blows in early April, I remember those pre-season practice matches, the coldness in the air exacerbated by the lack of nervous energy. The match’s real point is not the play itself but the unthinking camaraderie back in the dressing-room, finding refuge in the instant coffee and laughter. By the end of play, when the temperature has dropped to a few degrees, your face glows with rustic ruddy simplicity. But always, not far beneath the surface, the old questions: will this be my year, can I break through, sustain it, make the England team?

Spring rain brings an odd kind of guilt. Where the working world feels only resentment at a damp bank holiday, the batsman has mixed emotions. When May showers turn the velvet mossiness even more lushly green, the batsman knows the day will bring no pressure or anxiety – but no challenges or opportunities either. Rain gifts cricketers random holidays, jokers shuffled into the pack of working days. But how to feel about them? To relish an empty day too eagerly is a symptom of bruised confidence. To pull back the curtains, see rain and feel instinctively relieved: a bad sign. By the end of that afternoon, after stretched-out card games and high-tempered indoor football, you feel a day has been more fully wasted than does the office-worker trudging back home from a day trip to a sodden beach. 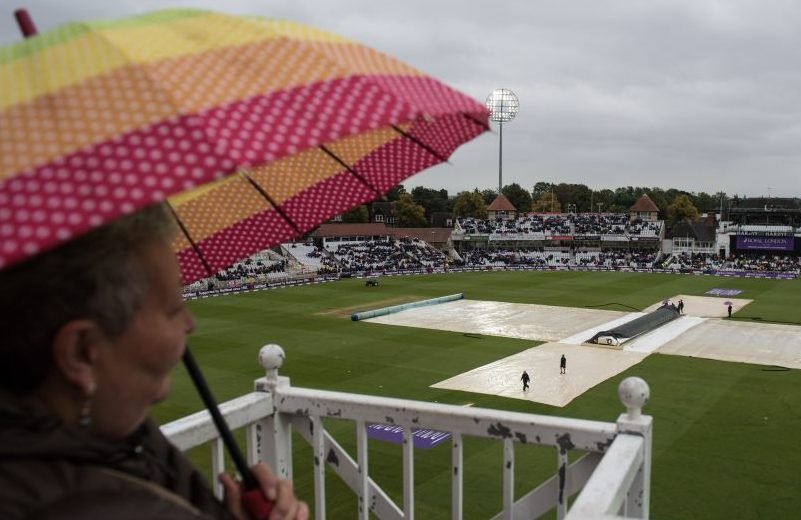 Later, in high summer when the air is hottest at two or three in the afternoon, I think of batsmen in full flow. There are two ends to the stick, of course. On the receiving end, in the field, there is the desperate certainty of watching a master batsman mercilessly compile a hundred in midsummer.

Then a second, happier memory, days when I was the controlling figure myself, feeling invulnerable with the bat and, just as good, sensing that the fielding side knew it too. Even gently timed shots, lent on rather than hit, skate across the scorched and spike-scarred earth, the pale and brittle grass unable to slow the ball’s journey to the boundary. The sun becomes your ally, helping the bowlers and fielders to wilt, sapping their belief as well as energy. In a way, heat and cold have the same effect: extremes magnify an advantage where temperate days narrow the gap, preserving hope.

When the shadows lengthen and the evening light softens, I remember the hardest job of all, opening the batting just before six o’clock, wondering how many overs I will have to negotiate, uncomfortably aware that the bowlers can roar in then rest up all night, knowing how much easier it will be tomorrow if only I can make it through, trying not to resent the fact that an accident of the clock has made my job so much harder.

Autumn proper, damp leaves and bonfires, will always feel like a chapter completed. A time to slow down, to gather, and to summon energy for another attempt.

However deeply Ring cut into it, his cake had exactly the diameter of Frank Chance’s diamond

F. Scott Fitzgerald, writing about the sportswriter and humorist Ring Lardner, rebuked his friend for allowing sport to absorb too much attention when Lardner’s receptivity was at its peak and his experience was most formative. “A writer can spin on about his adventures after thirty, after forty, after fifty,” wrote Fitzgerald, “but the criteria by which those adventures are weighed and valued are irrevocably settled at the age of twenty-five. However deeply Ring cut into it, his cake had exactly the diameter of Frank Chance’s diamond.”

I don’t quite agree with Fitzgerald. But it is certainly true that cricket got into me, my way of feeling. Throughout this year, my mind has wandered back to another cricket season, my first as a first-class player, 18 years ago. That spring is the most deeply imprinted, the April by which all the others have been measured. In fact, 1996 is now the exact halfway point of my life; perhaps it is natural to feel conscious of the hinge.

Each day I cycled to Fenner’s, the university’s ground, cricket bag on my back, precariously balanced. The first three days of practice, 1, 2 and 3 April, were all perfectly sunny – an augur. After making runs in the “friendlies” against other universities, I was selected to play for Cambridge in the season’s first-class opener against Glamorgan.

It was an astonishing anachronism that I could be playing first-class cricket as an 18-year-old amateur. Just as football was embracing the global outreach of the Premier League, cricket allowed England’s two ancient universities – really no better than decent club sides – to retain the status of elite professional teams. We might have been out of our depth, but I told anyone who’d listen that I would make a hundred on debut. At one lunch, challenged by a sceptical friend, we shook hands on a bet.

The first day of my first season was spent mostly in the field. It was a pattern I’d get used to. Our professional opponents would mercilessly tot up 300-odd for the loss of a wicket or two, then declare, inviting the student amateurs to suffer half an hour in the fading light, from 6 to 6.30, just the kind of mini-session that, much later as an opening batsmen who’d experienced a good few failures, I would learn to dread.

Not then. I finished the first day of my career 13 not out, annoyed to have my innings interrupted. That night, meeting two of the university’s old hands for a pint in the Cross Keys pub opposite Peterhouse, I casually announced that I needed only 87 more the following day. “Settle down,” our opening bowler said, “you’ve only got 13!” I was only out by one. The following day I was caught behind for 101. I really ought to remember the celebrations that evening but I can’t. The ambience of that week and that April month hasn’t faded, the “fun” I can’t remember at all.

I now live at the top of the North Downs in east Kent. A good day begins by walking across the valley to Elmsted, then rising again towards Hastingleigh. It is one of the remotest corners of England’s congested south-east. Two Norman churches serve perhaps a dozen houses. If a car passes on your walk, you can count yourself unlucky.

Walk a little further, up onto the Wye Downs, and southern England opens up before you. It is too wild to be straightforwardly pretty, more uncontained than the manicured spirit of the commuter belt. To the north and east, the Downs curve in a gentle arc. To the south and west, the land drops away quickly towards the Romney Marsh and the Channel beyond. Man has left his mark, too. There are grassed-over craters, a dozen yards wide, scars left by Doodlebugs in 1940.

When I lived in Wye 11 years ago, playing cricket for Kent, I would run up the Downs to train. With what now seems comic myopia, I never reached the remarkable view from the top. I had my circuit and stuck to it – aerobic goals came before aesthetic considerations or a sense of adventure. Talk about missing the woods for the trees! I am only half joking when I wonder how many more hundreds I would have scored if I’d slowed down and made it to the top.

The walker, thankfully, has outstayed the runner and this year I’ve walked the Downs every morning I’ve been at home. Nature’s renewal is deepened by human continuity. Writing in his 1909 memoir The South Country, Edward Thomas, who lived and walked in Kent, tried to capture what made this landscape “mellow and serene, that knows not moorland or craggy coast”. His answer: “Only a thousand years of settled continuous government… could have wrought earth and sky into such a harmony… We bow the head and reverence the labour of time in smoothing the grass, mellowing the stone.” 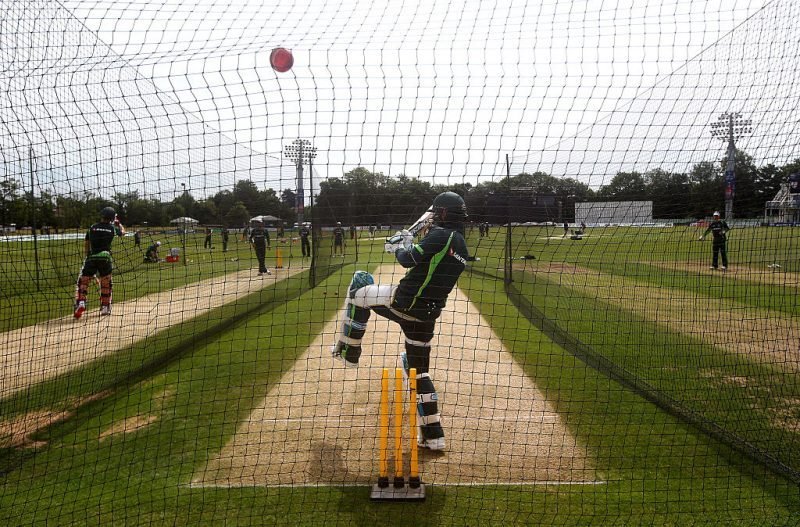 It surprised me, coming back to live here, only eight miles from the St Lawrence ground in Canterbury where I spent such a good portion of an earlier career. The first few years after I’d left cricket, I half-consciously avoided Kent. It felt more likely I’d live in America or Europe than go back near the fields where I played cricket, when ambition was so bounded and narrow. It can be hard to tell which parts of our past will remain securely in the past, and which are aspects of ongoing experience.

A common mixture of ambition and competitiveness led me to cricket, but something very different was left behind. Through landscape and memory, weather and nostalgia, a sense of place and belonging, cricket still punctuates my seasons and informs my home. It remains my liturgical calendar and, even though I no longer worship, the meaning survives.

This article appears in issue 8 of The Nightwatchman. Available in print and digital editions.