Rocker and swinger Ryan Sidebottom talks through his career-defining moments in an exclusive chat with Matthew Sherry.

I’d been for a Yorkshire trial and bowled really well, but for some reason I was put into the B team. I think it was a fear of nepotism; because my father had enjoyed such a good career for Yorkshire, parents would always say he was the only reason I got picked. But the first XI had a few injuries and I was brought into the team to face Notts at Ackworth and I picked up five wickets when they were only chasing a small total. It was about coming into the team, showing them how good I was, and giving the selectors a kick up the backside. I showed them they had made a big mistake.

The kick up the backside

I remember my mum driving me and another lad from Huddersfield to play a game. We lost, but I thought I bowled pretty well until the Yorkshire Schools coach told me, in front of all the other kids, that I may as well give up the game because I was never going to make it. At that time, I was just enjoying the game and not really thinking too much beyond that, so it really hurt. I never spoke to my mum on the way home. When I did get home, I told her and my dad and he just said: “What do you want to do? Prove people wrong or go and work down the pit like my dad did?” That gave me the kick up the backside to prove people wrong and do better.

There were a lot of county regulars in our team, including Fred Flintoff, Alex Tudor and Ben Hollioake, and I was still making my way in the game. But I got 7-30 at Edgbaston and felt like I’d really proved people wrong at that stage. Just to get in the England age-group sides was a massive achievement, but to go in with those highly-touted players and star was really nice. I was chuffed to bits and I think I ended up with the most wickets in the series.

Making my first-class debut was incredible, especially given that I had gotten the call quite late to come down to Leicester. I think I was 19 or 20 and I managed to get Ian Sutcliffe out as my first wicket. There were lots of big players like Martyn Moxon, Craig White and Darren Lehmann playing who I grew up looking up to and watching. To make my debut and take three wickets in the only innings was incredible. I was just thinking of the history and all of the players who have come and gone in the past.

I knew I was good enough to play again

Making my debut at Lord’s was fantastic. I had only played a handful of county matches even at that stage, so I was relatively inexperienced. Walking into that dressing room, with massive players like Alec Stewart, Graeme Thorpe, Darren Gough, Nasser Hussain and Michael Atherton, knowing I was playing was a little overwhelming. Obviously the game really didn’t go as well as I’d hoped and a lot of people were saying I would be a one-Test wonder like my dad and it would be in the Guinness Book of Records. That really pissed me off because I knew I was good enough to play again.

I had made the difficult decision to move to Notts, where my game really developed and I won trophies. That earned me a recall to England, but then people said it was just a horses-for-courses pick. To get that call-up again after six or seven years was amazing, although I think I deserved it. To go back to Headingley, where I had 10 wonderful years, and take eight wickets was such a great moment. Again I think I proved people wrong. People had said I was a little bit too old so it was extra sweet. I had a glass of wine on the night with my family, and even had a bit of a cry. It meant a great deal, taking those wickets and coming back to Yorkshire.

It sounds ridiculous but one game that stands out was against India at Trent Bridge. I only got one wicket, with MS Dhoni nicking off, but I don’t think I have ever bowled better. India had all the stars, Sachin Tendulkar, Rahul Dravid, Sourav Ganguly and VVS Laxman, and I bowled brilliantly. I think I must have made Sachin play and miss 20 times! Even my dad, who never likes to give me too much praise, told me I bowled bloody beautifully afterwards –  and that is saying something! 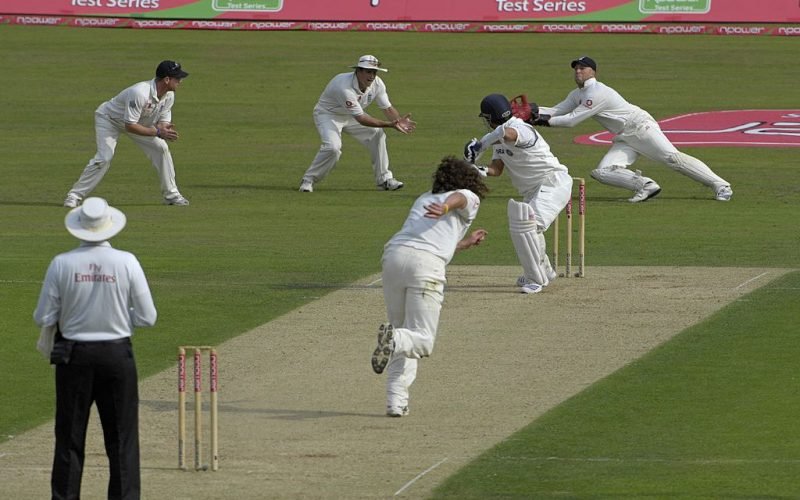 Sidebottom induced an outside edge from Sachin in the third Test at The Oval, but Matt Prior couldn’t hold on

I had been consistent for England, but I think this is the game people will always think of. I remember my mum and dad had flown over and they were watching when I took the hat-trick. It was the only time I claimed 10 wickets in a Test and, again, it was just really emotional. My dad stayed out of the way because I could see he was starting to fill up with tears. It means so much to play for England and to be one of very few to have taken a hat-trick is something you can’t take away from me. I have a framed picture and kept the ball. It will always be etched in my memory.

This was almost the perfect storm. I was back at Yorkshire having left Notts – I never really wanted to leave – and I was trying to win the County Championship at Trent Bridge. I have been lucky enough to win it four times, but to win it with Yorkshire was incredible. And obviously to take those wickets and win the Man of the Match award was even better. My wife and parents were there and it was just another day that brought a lot of tears. It was bizarre to be back at Notts doing it because they were massive in my career, but it was a special day.

Winning the World Twenty20 was the undoubted highlight of my career. I had played in the World Twenty20 when we lost to Holland the previous year and there were lots of people wondering why I was picked over Jimmy Anderson. I was the joint leading wicket-taker alongside Graeme Swann with 10 wickets, the last two of which I’ll never forget. I got Shane Watson and Brad Haddin out early in the final and that really set the tone for the momentum of the game. I just bowled really well in that tournament and to have been part of that XI was incredible. I will never forget the party afterwards; we were on a boat with a few beers singing We Are The Champions by Queen. England might not win a World Cup again for a long time, so to have been a part of that was my ultimate defining moment.