Muttiah Muralitharan, the most successful bowler in Test history, identifies the moments that made him in a chat with Ed Davis. Introduction by Roshan Gede.

A magician, a match-winner, and above all else, the all-time leading Test wicket-taker – Muttiah Muralitharan is one of the greatest to have graced the game. With 800 scalps in Tests and 534 in ODIs, Murali is, by a distance, the leading-wicket taker in the longer versions of the international game. Add to it his 13 T20I scalps, he’s taken a staggering 1,347 wickets in international cricket – that’s 346 clear of the next highest, Shane Warne. Murali’s brilliance with the ball is akin to that of Sachin Tendulkar’s with the willow. His impact, though, was much beyond numbers.

At 24, he was a key member of Sri Lanka’s World Cup-winning side in 1996. Then, 15 years later, in his last international tournament, he led Sri Lanka’s charge to the final at the 2011 World Cup, taking 15 wickets at 19.40. In Tests, he was Sri Lanka’s go-to man during the Nineties and the Noughties, starring in some of Sri Lanka’s most famous wins. Arguably the most remarkable among those came at The Oval in 1998, where he bagged 16 wickets to set up a 10-wicket win for Sri Lanka, an important victory that elevated their Test status.

His magnificent career was, unfortunately, punctuated with a few controversies, with suspicion over his bowling action. He was infamously no-balled for throwing by Darrel Hair at the MCG in 1995, and nearly a decade later, was banned from bowling the doosra. That, however, failed to deter his impact with the ball. Fittingly, he signed off with a wicket off his final delivery in Test cricket – against India at Galle in 2010, which made him the first ever bowler to claim 800 Test wickets. It’s a feat that is seemingly beyond anyone’s reach.

I took up cricket at the age of eight, but at first I was just a medium-pacer – I was definitely not quick! I took up off-spin at the suggestion of my coach Sunil Fernando while I was at St Anthony’s College in Kandy, and it quickly became obvious I was much better at spinning the ball than trying to bowl fast! I took five-fer in my first game as a spinner and never looked back – in my last full season at St Anthony’s I took more than 100 wickets in just 14 games.

As I was enjoying so much success in schoolboy cricket, the selectors invited me to play in a two-day friendly against England A, who were touring Sri Lanka that winter. It was a strong side that included Graham Thorpe and Nasser Hussain, but the batsman who stood out for them was Mark Ramprakash – he was in great form and looked a class apart. I bowled really well – the ball came out nicely and I got it to spin big and bounce – and ended up taking six wickets. That was enough for the selectors to take me on the 1991 tour to England, where I played a few games and bowled at our batsmen a lot in the nets. That really accelerated my development – I improved so much as a player by going on that tour.

I made my international debut in 1992 and had already taken some five-fers, but this one sticks out because it helped us to Sri Lanka’s first Test series win overseas. [Chaminda] Vaas bowled really well throughout the game and ended up taking 10 wickets in the match, while I took five of New Zealand’s top seven’s wickets in the second innings on a pitch that wasn’t really helpful for spinners. It was a great feeling.

A game that I don’t remember fondly but one that helped make me the man I am today. Darrell Hair started no-balling me – I think it was something like seven times in three overs – and I just remember feeling shocked that people could think I was cheating – nothing could have been further from my mind. I thought about walking away from cricket, but thanks to the support of my family, friends and teammates I came back a more resilient person. The ICC cleared my action, I always did everything asked of me, and I know I always played the game the right way.

Winning the World Cup was amazing. I don’t think Sri Lankan cricket would be as strong as it is now if we hadn’t won that tournament – it inspired a generation. I only took one wicket in the final – Darren Lehmann out stumped – but I was the most economical bowler in the match and that helped us build pressure on the Australian batsmen, and they ended up succumbing. Easily one of my proudest moments on the pitch. 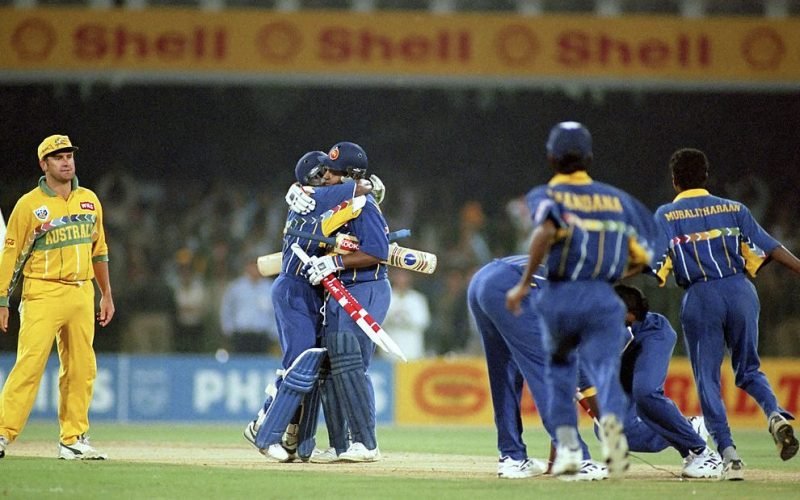 A special win. England thought they had batted themselves into a great position after scoring 445, but Sanath Jayasuriya [213] and Aravinda de Silva [153] batted brilliantly, scoring their runs quickly and tiring England out in the field. By the time I came to bowl in the second innings the pitch was quite dry and offering bounce, so I knew I was in with a chance. I bowled nicely, really accurately, and England just didn’t seem to know how they wanted to play me. Getting 16 wickets in the match was an amazing feeling – I still shake my head when I think about it. 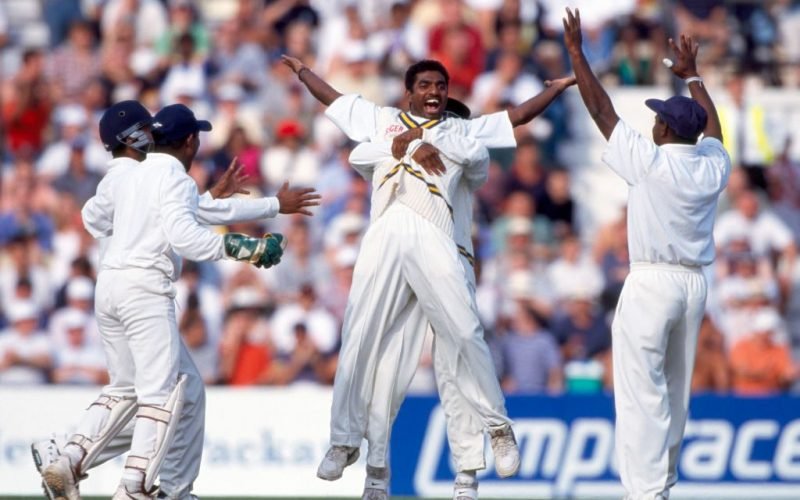 Call him the red rose

Lancashire signed me for the season after that match at The Oval. I didn’t get to bowl in my first Championship game because of rain, but in my second game I got 14 wickets and I finished that season with 66 first-class wickets at just 11.77. I learned so much playing county cricket, it helped round me out as a bowler and I look back on my time with Lancashire very fondly – I made a lot of friends at the club, especially Andrew Flintoff – I just wish we could have turned some of those second places into more silverware!

My most successful ODI performance came against India at Sharjah. Against a really good batting line-up that included Sourav Ganguly, Sachin Tendulkar and Yuvraj Singh, I took seven wickets while keeping the runs tight. We’d racked up a big score in our first innings so India had to come out all guns blazing, but I backed myself and ended up with what were the best ODI figures for quite a while.

We are the champions

A proud moment. The Warriors had been playing some great cricket in the run up to the Champions League final and were obviously confident. But we were a very good team, the best Twenty20 side in the world according to a lot of experts and pundits, and we were determined to prove them right. The Warriors won the toss and decided to bat, but we bowled very economically and kept them under pressure throughout. That’s the key in Twenty20, if you keep the scoring rate down batsmen are forced to go for shots they normally wouldn’t and get themselves out.

What a moment this was. pic.twitter.com/jkUG1WVUwf

The obvious one! I entered the match knowing I needed eight wickets to finish with 800 Test wickets, but I also knew I was up against a fantastic India batting line-up – Tendulkar, Sehwag, Dravid, Laxman, Gambhir and Dhoni don’t just give their wickets away – so I couldn’t have scripted it any better. It was one of those days where I just felt good from the first ball – I can’t really think of a time when I bowled much better – my control was good, I was getting the ball to turn, so I knew I just needed to be patient and my opportunities would come. It wasn’t just about me though, it was about the team – I wanted to win my final Test more than I wanted 800 wickets and I was telling [Kumar] Sangakkara to get a wicket any way he could! But it was a great moment when that final wicket fell, one of the greatest of my life.