Brian Lara, the game’s greatest record-breaker revisits the stories behind those historic innings in an exclusive chat with Jo Harman. Intro by Roshan Gede.

A delightful stroke-maker, a proven match-winner and a man worthy of the title ‘Prince’, Brian Charles Lara formed the core of the greatest batsmen of his generation alongside Sachin Tendulkar, Ricky Ponting, Jacques Kallis and a few others. The West Indian batting, after being defined by the sheer dominance of Gordon Greenidge, Desmond Haynes and the great Vivian Richards during the late seventies and eighties, was later carried on by the ‘Prince of Trinidad’ for almost two decades. The unmatched flair and the sheer authoritative presence at the crease remained unprecedented.

Lara went on to score 22,358 runs during his 17-year long career for West Indies and at one point, was the highest run scorer in red-ball cricket, before his tally was bettered by Tendulkar in October 2008. Of all his numerous records, Lara would best be remembered for his monumental feats of 375, 501* and 400*. The first of those came against England at St. John’s in 1994, which saw him go past the great Sir Garfield Sobers to become the highest individual run-scorer in Tests: an event graced by the great man himself. Less than two months later, he posted a mammoth 501* for Warwickshire against Durham to go past Hanif Mohammad’s 499, a record that stood for 35 years. As Matthew Hayden took the honours in October 2003, scoring 380 against Zimbabwe, Lara took no more than half a year to set a benchmark with a mountainous 400* against England to reclaim his supremacy. 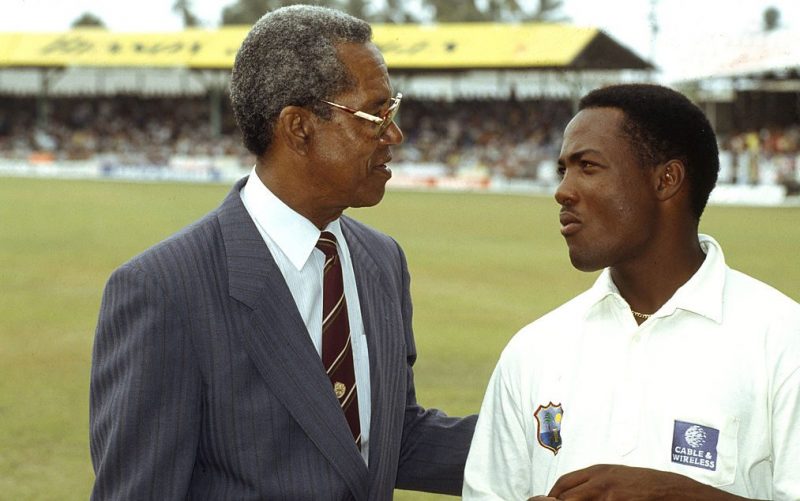 Brian Lara in conversation with Gary Sobers at Bridgetown, Barbados in 1994

I remember playing for Fatima College and having to bat at No.7 or 8 because it was a pretty good team. One Friday afternoon I got an early hit because an opposition bowler got a hat-trick and I was able to score a hundred, aged 14 playing Under-19 cricket, and from then I knew I had a good chance at this game. A couple of years later I met Sir Garfield Sobers for the first time at a schools tournament in Barbados and interacted with him a bit. He had a liking for my style and that was enough to motivate any youngster. Those were key moments in my early years.

I’m very thankful to Carlisle Best for this opportunity. I was not in the team but he got his webbing torn apart standing at slip during practice and I was called in to play my first Test. It was a great experience and playing against Imran Khan, Wasim [Akram] and Waqar [Younis] was just an awesome moment and to make a contribution on debut was something very special to me.

We were 1-0 down in the series and Sydney was not a ground that gave us great results. To be able to pull off this innings against the likes of Shane Warne and Craig McDermott at a very young age and shift the balance towards us with two Tests to go was amazing. My daughter’s name is Sydney simply because of that innings. It’s an innings that any young man would cherish and it’s definitely in my top five. I remember coming off the field at tea on 120 and Rohan Kanhai, our coach at the time, told me to set my stall out and bat for as long as possible. That innings served as a template for me. When I got to 100 I didn’t see it as a milestone or a great achievement – I always had the motivation to carry on.

“I could see the look on Ambrose and Walsh’s faces: ‘Don’t get out, we don’t want to bowl on that track!’”

The catalyst for this innings was England beating us in the previous match at Barbados. We’d already won the series but we wanted a grandstand finish at Antigua. I wasn’t thinking of a world record but I didn’t want to get out until the captain was ready to declare. I could see the look on Ambrose and Walsh’s faces: ‘Don’t get out, we don’t want to bowl on that track!’ It was a momentous occasion in my life and I suspect it had something to do with destiny. Sir Garfield Sobers had been pretty upset that I got run out on 277 against Australia a year earlier and I was so happy he was there to see me break his record [for the highest individual Test score].

The really big one 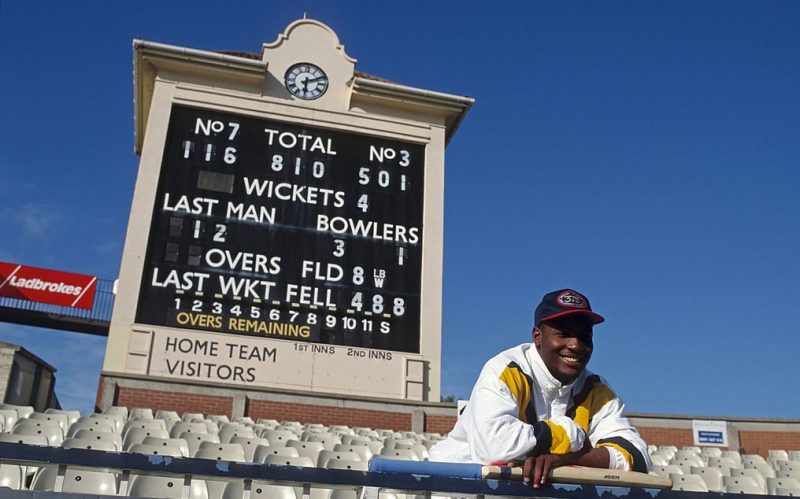 Brian Lara, with the scoreboard showing his truly unique 501* at Edgbaston in 1994

I’d toured England in 1991 and found the conditions difficult. I didn’t play in the Tests but guys bowling little medium-pace kept knocking out my stumps in the practice matches. I warned the media it might take some time to get accustomed to conditions when I arrived at Warwickshire but I was able to get some runs from the minute I landed [six centuries in his first seven innings]. In that match against Durham I thought my run was coming to an end. I got bowled off a no-ball on 10 and was then dropped behind for 14. I told the umpire, ‘I’m exhausted, this could be the end of the run!’ A day-and-a-half later, things were a bit different. We tried to get a game going but were unsuccessful in convincing Durham to set up a match so it was all about getting batting points. I was on the attack all day and then records starting tumbling. I put my head down and went for the ultimate. 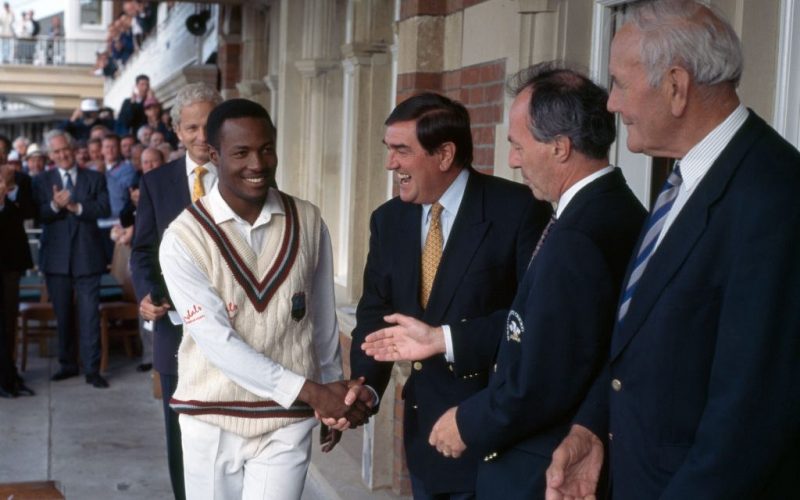 This was a very tough series. It ended 2-2 and England had us on the ropes. Every time we put our heads in front, they came back and I batted pretty well [three centuries and three fifties in 10 innings]. England would have fancied winning the series at the Oval but the big partnership I had with Carl Hooper put victory beyond them. Ending the series with a big ton was a very good achievement but I wish the runs were in a winning capacity. The norm for the West Indies was to beat England.

My performances in Sri Lanka in 2001 were some of my most impressive. That series was a huge moment in my career. We lost all three Test matches but I was named Player of the Series after scoring three centuries, including a double. How can someone be named Player of the Series if they lost all three Test matches? I remember scoring a century and a double in the same match and still losing with two sessions to go!

#OnThisDay in 2004, Brian Lara became the only player to score a quadruple century in Test cricket.

Will his 400* ever be surpassed? pic.twitter.com/dvLuVtTusY

This was a completely different scenario to 10 years earlier when we were 3-1 up. My foremost thought as captain was that we didn’t lose this series 4-0. If you speak to Michael Vaughan he’ll tell you that I was out on 0 but I didn’t feel the ball on the bat and I’m only going to walk when I know I’m out. It called for someone to play a big innings and I was happy to do so. They had a couple of guys, like Nasser Hussain and Graham Thorpe, who were a part of the 375 and the 400 – they weren’t happy. It was another momentous moment in my life. 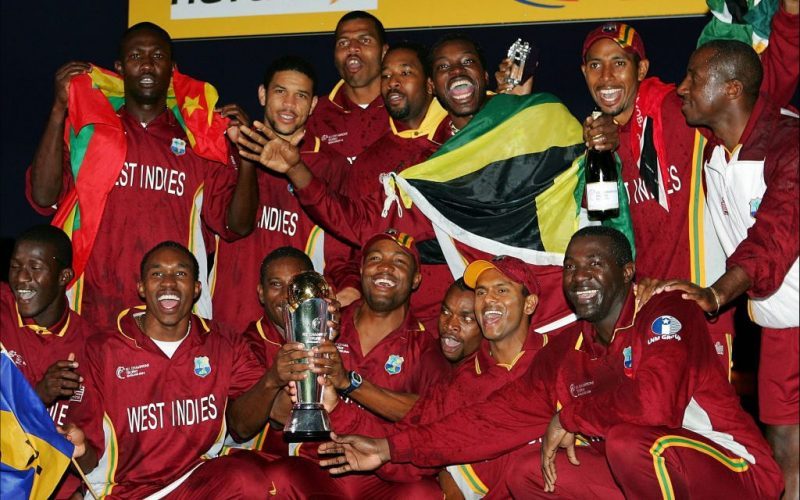 We’d had seven Test-match losses against England in eight matches in a six-month period and we went to Bermuda for a little rest and relaxation to see if we could get our heads together. We came back to England for the Champions Trophy still a bit divided, unsure of ourselves and lacking in confidence – a lot of individualism was happening at the time. We tried our best to bring things together and to come out champions, beating England in the final, was an awesome feeling. As a captain with not much to shout about, that trophy was a very special moment.

The best of the lot

When anyone asks me for my favourite innings they tend to try and steer me towards that 153* in Barbados but the 213 a week earlier in Jamaica is the one I cherish the most. We’d just lost 5-0 to South Africa, we’d lost the first Test against Australia and they were expected to win the series convincingly. I was put on probation as captain for two Test matches and I was under immense pressure. It brought out a quality in me that I did not know I had – it was of that magnitude. I’d played match-winning and match-saving innings but in terms of a personal crisis, and a crisis for the West Indian team, this was something different. It showed I had true mettle and was someone who could dig their team out of a very deep hole [West Indies won by 10 wickets and drew the series 2-2, Lara scoring 546 runs at 91]. That innings in Jamaica was the best I’ve ever batted. Maybe not in style – the 277 at Sydney might be better in that respect – but certainly in terms of pressure and what was happening around me.