Back in 2008, Jim Troughton paid tribute to Kumar Sangakkara and the time he spent with the brilliant Sri Lankan batsman at Edgbaston.

Most hero-based write-ups come from childhood experiences; being sat in front of the TV or listening intently to the wireless – certainly occurring before anyone has contemplated playing cricket for a living, let alone achieving it.

Growing up, I too had my fair share of cricketing idols. I would religiously change the colour of grip on my Kookaburra Ridgeback bat to match Allan Lamb; I would try to emulate the Gower cover drive in the back garden; I wanted the power of Robin Smith, the patience of Atherton and the flat out coolness of Lara; I would even sand the face of my bat to leave the cherries in the middle to look like Martin Crowe’s Duncan Fernley.

However, my ‘Icon’ experience differs considerably from most. I wasn’t still at primary school – I was 28 years old, and I wasn’t watching on the box – I was next in.

Of course I already knew that Kumar Sangakkara was a bloody good player. A successful Test cricketer and very accomplished gloveman, but when he strode to the wicket for his Warwickshire debut, on a sporting track with ‘Mr MVP’ Ottis Gibson and an angry Graham Onions running in at him for Durham, he cemented himself, to me, as a true Jedi of a batsman.

He compiled a beautifully unhurried 149, punishing anything loose whilst respecting the danger deliveries by either leaving well alone or simply playing the line of the ball. He resisted the temptation to follow the movement off the deck. I partnered him for an extremely short time that innings, before glueing myself to the viewing area once more to watch and learn.

I will start with the technical stuff. He, like all great players, seems to possess soooo much time. He’s a lefty for a start, and you know what they say – taking the lefties out of cricket would be like taking bubbles out of champagne.

He has an orthodox stance and a simple pre-delivery movement that is rhythm personified.

Usually, the main aim of a trigger movement is to ready oneself for the delivery. And to complete it early enough, so as to be still at the ball’s release. Something that is robotic for most, but effective. Kumar’s, on the other hand, appears pure. A tap of the bat is synchronised with a back foot/front foot shuffle. A straight backlift. And a metronomic swing that doesn’t look contrived or over-rehearsed, just something that happens. 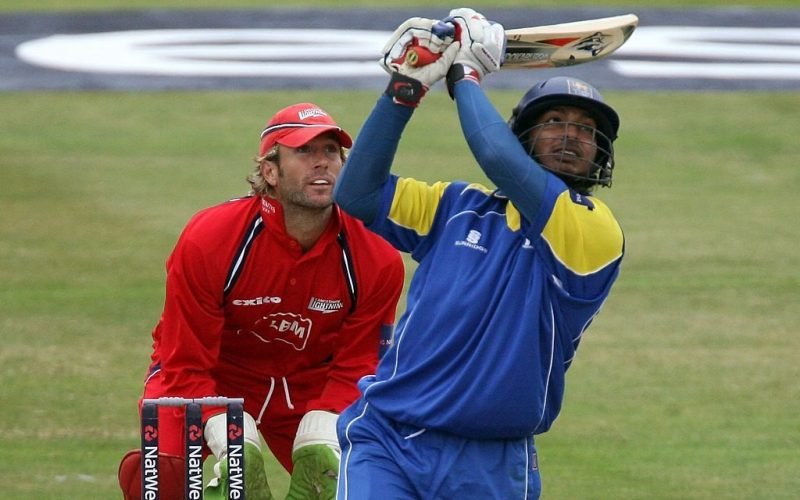 Kumar Sangakkara batting for Warwickshire during the 2007 NatWest Pro40

This gives him the balance to play off the front or back foot with equal success. And due to the fluidity of his movement it gives him the ‘Jedi’ quality all top batsmen possess.

This was evident especially during the Durham innings where he was swivelling effortlessly into his pull shots as well as easing into anything over-pitched, belying any predictive quality to his batsmanship.

During 2007, he racked up some serious international runs. He became the first batsman in the history of the game to register four consecutive scores of 150 plus. He has six Test double-hundreds to his name, bats at three and keeps wicket – to Murali. What a show-off.

So, what about the bloke himself? Well, if you type ‘Cricket sledging’ into YouTube you’ll find him giving Shaun Pollock a mouthful during a World Cup match in South Africa. This gave me the impression that he was probably a chirpy, arrogant and slightly annoying bloke. I couldn’t be more wrong.

#OnThisDay 13 years ago, Kumar Sangakkara was cruelly dismissed for 192 against Australia after being caught off his shoulder.

No wonder he makes this list…https://t.co/dWuZoPiwSm

Kumar, or Harold as he was affectionately known by the team – derived from the comedy film, Harold and Kumar –  was gracious and relaxed, possessing the calmness and poise of a true gent. One of those guys you instantly warm to. He spoke well in team discussions and was open to the idea of individual chats with youngsters.

He would offer to give throw downs or bowl his filthy off spin in the nets whenever needed and passed on game-plans and methods he found helpful to his cricket. He even went as far as donating one of his wand-like Kookas to yours truly, as well as sorting Darren Maddy and Jonathan Trott with a life-time supply of Nike spikes.

Last but not least, he could also recite all 21 verses of Don McLean’s classic, “American Pie”, which was as impressive as it was disturbing.

I do hope Harold returns to Edgbaston in the future. He was only with us for a shortened period but gave an injection of class to our top order and some comedy value to our dressing room. If he could bring over some more kit the next time he’s over, that would also be great. I’m also led to believe that should I get a signed Kumar shirt, I’m guaranteed free takeaways for life at my local curry house.