It was the big day, Finals Day, and Surrey Stars had come into it as the lowest-placed of the three teams – they had qualified on the last day of the round-robin stage, while Loughborough Lightning and Western Storm had reached there well before.

On the day, though, the team that had stuttered their way through to the final had the last laugh, and it was two of their biggest stars, Natalie Sciver and Lizelle Lee, who came to the party to seal the deal for them.

On to the final then, against Loughborough, and it was one-way traffic as Lee decided to make the stage her own. The South African opening bat, one of the most feared hitters in the women’s game, sent the ball to the fence at County Ground in Hove 13 times and over it on six occasions to race to a 58-ball 104.

“We’ve had a bit of an up and down tournament to be honest, but we peaked at the right time and managed to get over the line,” said a thrilled Sciver after the win. “Even Lizelle Lee hasn’t had the greatest of competitions up until today, but she certainly peaked today and came to the party. 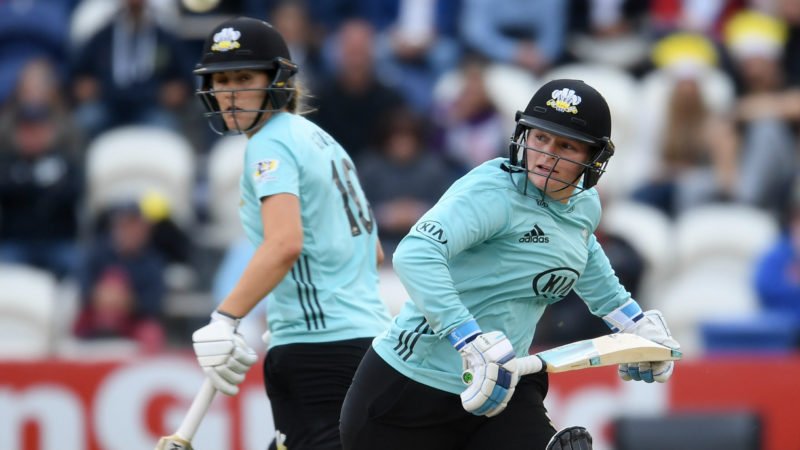 Sciver showed the way in the semi-final, while Lee was the star of the win in the final

“We’ve had some really close games and a couple of poor defeats early on in the group stage. But we’ve just grown as a team throughout the competition and it’s a great feeling to win today.”

Lee’s best performance in the tournament before the final was a 37-ball 70, but she upped the ante brilliantly when it was most needed.

“One moment you’re down there, the next moment you’re up there. So yeah, it’s a great feeling,” said Lee, the Player of the Match.

“It’s the way the girls went about it. From losing so many games in the first round, we basically had to win every game in the second round. The girls were so good. They just pulled together as a team, and I’m so proud of them.”

Loughborough were left licking their wounds, but Georgia Elwiss, their captain, knew that her team had been beaten by a special player and a special performance.

“Lizelle played an outstanding innings and Surrey performed a lot better than us on the day for whatever reason,” said Elwiss. “Our girls can hold their heads up high as they have had a terrific campaign and I am so proud of them.

“We started really well but hit some bumps along the way and showed great resilience.”

To sum up what has been an incredible come-from-behind story for the Stars, who had won only one of their first four games before scripting a turnaround, here’s their stalwart, Sarah Taylor: “We didn’t have the best of starts to the tournament so to come back and play the way we have, some really hard-fought games … to play the perfect game in the final means a lot.”