While the willow-wielders from the Indian men’s team have found it difficult to hit the ground running in the swinging conditions in England, one batter from the same part of the world is turning heads big time.

Smriti Mandhana, who rose to prominence with her impressive strokeplay for India in the ICC Women’s World Cup 2017, continues to grow from strength to strength as an international cricketer, and has been in superlative form at the Women’s Cricket Super League 2018.

Her batting average in her maiden stint in the competition stands at a staggering 77.40 right now.

“I didn’t expect to bat this well in this tournament. I always wanted to come to this tournament to learn a few things that would help me in the T20 World Cup. But yeah, the first T20 century is always special,”  Mandhana said in an interview to bcci.tv.

“When I got this offer from Trevor (Griffin), our coach, the only thing which I was keen was that the World Cup is coming, I didn’t take even, maybe a day to say yes to him, because I was really keen to play this league.” 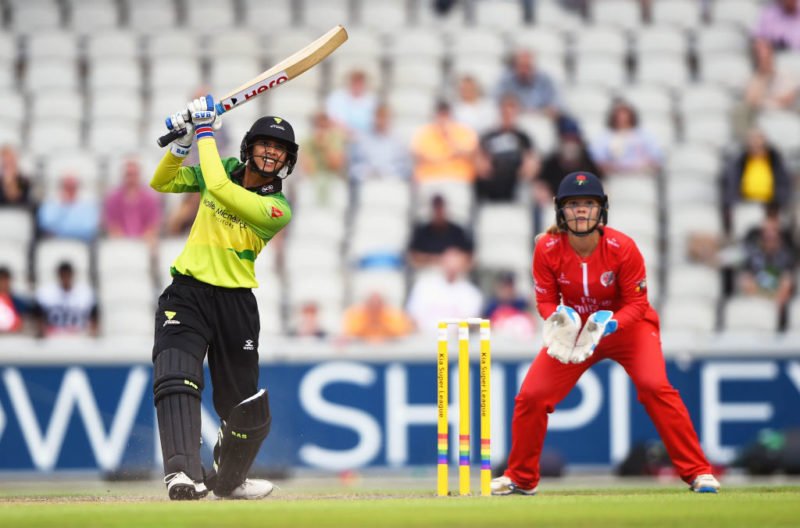 “I was really keen on playing in this league”

The left-hander is relishing the opportunity to face international bowlers in the WCSL and as the current vice-captain of the national T20 side, realises the importance of the exposure she is getting in England.

“I’ll be playing the same bowlers in the World Cup, and to play them beforehand would be a really big thing and I will also be able to tell all my teammates how they are bowling, and what they are strategizing. That was a really big bonus for me,” she said.

“Heather Knight, (Anya) Shrubsole, Fran Wilson, along with the other England girls, and Stafanie Taylor as well, from the West Indies (are my teammates). So I have been picking her (Taylor’s) brain as well – how the wickets will be in the West Indies, what the weather will be so that I can understand the conditions. It’s been really good interactions with them.”

Mandhana recently revealed how she tweaked her batting stance a few months ago to create more shot-making opportunities for herself, predominantly on the leg-side. Her participation in the WSCL is helping her add to her craft even further.

“I have had one or two lessons with Wilson about reverse sweep, because that’s one thing which I don’t really play, and I am really keen to learn, because you never know in T20 cricket, you have to use one someday. So really good interactions and good friends also. Maybe one day it will help me play better against some international teams.”

Mandhana has always spoken about how she grew up idolising Kumar Sangakkara and admiring his performances. The Indian opener recently interacted with the Sri Lankan great, and benefitted from the experience.

This just made my day. A big fan girl moment for me. Can’t express how glad and overwhelmed I am. This memory is going to stay with me forever ?? #blessed #grateful #Legend #thebest

“I was a huge fan of him (Sangakkara) from when I started watching cricket on TV. Whenever I don’t feel good about my batting, I go back and watch his clips,” she said. “He was doing commentary on our game. So I asked him, ‘Did you feel anything wrong in my batting, which I can improve on?’

“He was like, ‘You are in very good touch. If you think too much about it, you won’t bat the way you are. So just go out there, the way you are batting, I don’t think there’s anything there.’

“That was something really good to know from a legend like Sangakkara sir that he likes my batting and my drives. That was a really good confidence-booster for me,” she added.