It might be 10 years since 2005, but it’s 120 years since the first great Ashes battle – a series that was also led by a true hero of English sport, writes David Frith.

It was the first great Ashes series. There have been a couple since to match it, but England’s triumph in Australia in 1894/95 elevated Anglo-Australian competition to a peak that has simply been sustained as the years have passed. Even Queen Victoria took an interest in the scores as they came through via the new cable service.

England’s skipper was Andrew Ernest ‘Drewy’ Stoddart, widely known as ‘Stoddy’, miserably overlooked in the 100 years since his death. Having already led his country bravely and thrillingly on the rugby field, and in Australian Rules football matches in Melbourne in 1888, he was the first and still the only man to captain England in three sports.

Beloved by cricket followers in both countries, Stoddart put an astounding number of landmark entries into cricket’s story. His 485 for Hampstead in a club match in 1886 was for years the highest score in any cricket game. In 1893 at Lord’s he became the first captain to declare a Test innings closed. It was also at his home ground at Lord’s that season that he became the first batsman since way back in 1817 to score twin centuries in a match there. That same summer, for Middlesex against Notts, he also became the first batsman to reach three figures before lunch on the opening day of a county match.

And, on the ultimate stage, in this 1894/95 Ashes series he was the first England captain to put the opposition in in a Test. It was also a match in which England became the only side in the entire first century of Test cricket to win after having followed on. Stoddart then, at Melbourne, stroked 173, the highest score by an England captain in Australia for the next 80 years. (Mike Denness’ 188 in 1974/75 was against a weakened attack.)

How could such a champion have been airbrushed during the years that followed? It might have had something to do with his suicide in 1915, probably seen by some as shameful. Well might the centenaries of the deaths of WG Grace and Victor Trumper be noted this year, but Stoddy warrants a place on that same pedestal.

Andrew Stoddart, Ashes-winning captain in Australia, died in gruesome circumstances on this day in 1915. Here’s his @WisdenAlmanack obituary – https://t.co/VrQk923KIC #wisdenobits

He took 12 players with him to Australia in 1894/95, nine in the party six footers or more. There were no support staff. When Bobby Peel got drunk at a crucial stage of the first Test at the SCG, Stoddy simply sobered him up under the shower. His six wickets on a rain-wrecked surface then got England home by 10 runs – this after Australia had run up 586 in the first innings.

They were leisurely times. Between Tests the Englishmen ‘went bush’, never short of a hamper of booze, and shooting anything that moved. Bill Lockwood had a skinful before coming close to drowning or being taken by sharks in Sydney Harbour. 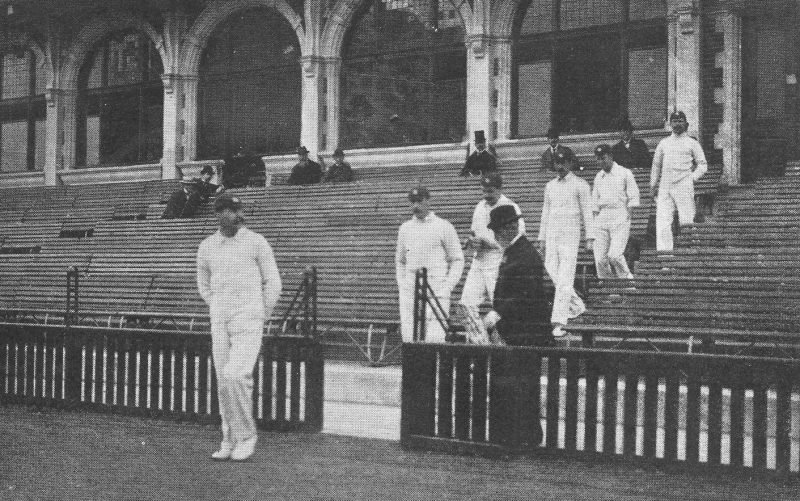 Andrew Stoddart leads out the England team at Lord’s

Stoddart’s men went two-up at Melbourne, thanks largely to his 173 – “the century of my career” he later stated. Then the series turned. In stupendous Adelaide heat, England folded against the rough-and-ready new boy Albert Trott (38 and 72, both not out, and 8-43 – has there ever been a debut to match that?). If Stoddy had one nice memory from this calamitous match it might have been the cry of a female spectator: “Here’s that dear Mr Stoddart!” (we would be keen to hear of any calls this summer along the lines of “Here’s that dear Mr Warner!”)

So England now led 2-1 with two to play. But Australia levelled at Sydney, a match wrecked by rain on the unprotected pitch, England spilling catches, and all over in two days of play, leaving Stoddy to lament: “It’s the worst wicket I’ve ever seen, absolutely the worst. And not only is it the worst I’ve seen but it’s miles the worst!” Before the pitch was ruined, little Harry Graham had made history for Australia by scoring a century in his first Test at home to go with the hundred he’d made on debut at Lord’s in 1893. That’s still unmatched.

The decider, at the MCG almost a month later, was a cracking Test match. Archie MacLaren’s 120 kept England in the contest, but they were eventually set a stiff 297 to win, ending the fourth day one down for 28. When Stoddart was lbw first thing next day England’s hopes seemed shattered. Enter JT Brown of Yorkshire to play one of the most stupendous knocks ever to swing an Ashes Test.

Someone played Rule Britannia on a tin whistle while Jack Brown swung his bat at everything. His fifty came in 28 minutes (still an Ashes record: he reckoned it took him only 27), and with Lancashire’s Albert Ward providing solid support, they turned the match against helpless Australian bowling. And all the while spectators played their flutes, and the band played Daisy Bell and Sweet Marie.

The Ashes had been won in a sensational series, the like of which would not come along until 2005

Onward charged Brown, to rapturous applause from the immigrants in the MCG crowd, on to his century, cutting and pulling manically, to 140, when he was caught. His stand with Ward was worth 210 – a new overall Test record – in only 145 minutes. England were almost home.

They did it: 298 in only 215 minutes off 88 six-ball overs: stats worth pondering. The Ashes had been won in a sensational series, the like of which would not come along until 2005. And the skipper who steered England through that series? “A courteous gentleman,” wrote MacLaren, “his delight over the success of any member of his side was beautiful to behold. His kindness to me was such that I always felt I could never do enough to make myself worthy of his affection.”

Drewy Stoddart, who shot himself on April 3, 1915, 100 years ago, England’s favourite and finest sportsman, and not even a memorial plaque or gravestone for him a century later.