They say that cricket’s all about partnerships, but who comprises the most influential pairings of all time? In 2009 Richard H Thomas took us through the most prominent of cricketing ands.

For Jack Hobbs, it was all about 12s. Eldest of a dozen children, 12 years older than his opening partner, and scorer of 12 centuries against Australia. Along with Herbert Sutcliffe, who was mined from Yorkshire grit, he just missed another 12, falling one short with 11 century stands in Ashes matches. The pair batted together for England 38 times and averaged 87 for the first wicket. No other Test opening pair gets close. Hobbs scored more first-class runs and centuries than anyone, surely never to be beaten (Mark Ramprakash, on 103, would need 96 more tons to match his Surrey predecessor). And Sutcliffe, unflappable and at his best on a ‘sticky dog’ wicket, is alone in claiming a Test batting average that never dipped below 60. Only Bradman, Pollock and Headley have a better overall average. 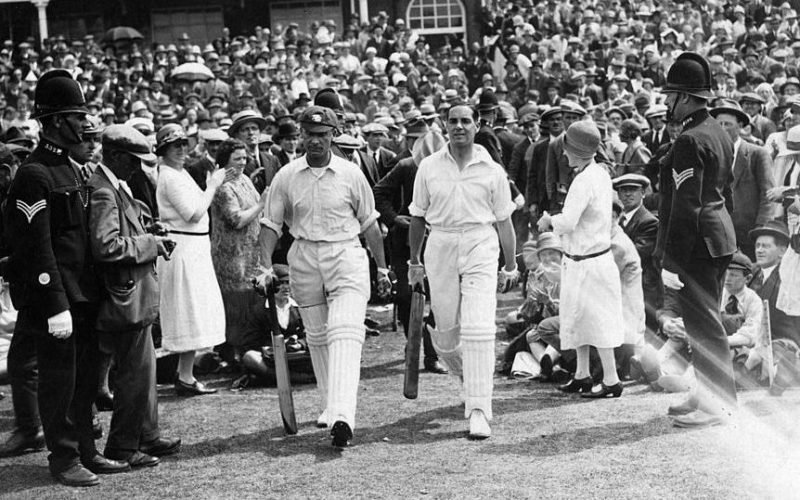 Hobbs and Sutcliffe, the most iconic opening pair in the history of the game

The Hardstaffs were one Nottinghamshire dynasty, but it was that other family from the banks of the Trent – the Gunns – whose name lives on in the modern game. Billy Gunn was a willowy Test batsman who also played football for both Nottingham clubs and twice for England. Two nephews also went on to play Test cricket, but the name was made in 1885 when, with local businessman Thomas Moore, he started making bats. Today the brand is endorsed by many of the worlds’ finest, including Michael Vaughan and Graeme Smith, and they have kept their Nottingham manufacturing base when many have moved overseas. Nowadays it’s all computer-aided design and ‘superior wood conditioning’ – old Billy Gunn would no doubt be mystified, but proud nevertheless.

A former enfant terrible of English cricket being paired with an austere Rhodesian looked a fair bet for flying sparks, flying bats and general turbulence, but this particular double act rejuvenated England’s Test fortunes when they were almost at an all-time low. Only Atherton and Vaughan captained England more times than Hussain, and only Vaughan, Brearley and May secured more victories. The team was a much-improved unit when he handed it on. Fletcher went on to Ashes glory, penned a controversial autobiography and was a coaching consultant for South Africa during their triumphant tour of Australia last winter. Cheech and Chong they weren’t, but after years of inconsistency Nasser and Duncan were the hard-boiled boys that England desperately needed.

All revolutions need a Castro and a Guevara, and when towering Australian broadcasting magnate Kerry Packer needed a lieutenant, he found one in the equally imposing England captain Tony Greig. World Series Cricket introduced coloured kit and floodlights for the first time, whilst the ban from traditional cricket grounds was bypassed by dropping pre-prepared wickets into football stadiums. Greig was reviled by the establishment but was offered a job for life at Packer’s Channel Nine and continues to broadcast extensively. When Packer died a hugely wealthy man in 2005 he left a positive legacy for cricket. Dennis Lillee reminded modern players of the debt they owed, giving them: “The chance to be well paid for what they did. It would not have been possible without him.”

This award-winning independent production company has original roots in Wales, but now covers a range of sports worldwide. If you have not succumbed to the temptation of Sky Sports and their wall-to-wall global cricket coverage, preferring instead a radio earpiece and the TV highlights at teatime, it will no doubt be a Sunset + Vine production that you watch. Instrumental in converting non-believers during the Ashes in 2005 with their innovative, accessibly approach, they must lamented along with the rest of the non-Murdoch paying public when Channel 4 lost the rights to live home Test broadcasts, but they have nevertheless continued sterling work producing nightly Test highlights packages for Five.

This was cricket’s version of the class struggle. From the turn of the 19th century until 1962, the amateur ‘Gentlemen’ (lots of initials; private means) took on the professional ‘Players’ (cold showers; small dressing room) at least once a year, usually at Lord’s. The final game in Scarborough perhaps epitomised the contest – Fred Truemen led an earthy collection that included Brian Close and Tony Lock to a resounding victory over an Oxbridge-littered Gentlemen team led by AC Smith and featuring AR Lewis, Roger Prideaux and Richard Hutton. Imagine the banter between overs.

As the TMS commentators and summarisers rotate to throw up random pairings, listeners with a sense of the macabre will ensure that they are always paying full attention when the BBC’s cricket correspondent finds himself sharing the mic with ‘Sir Geoffrey’. Occasionally toe curling, sometimes confrontational but always eminently listenable, Agnew gently presses all the right buttons and Boycott delivers, whether it’s his mother’s catching prowess with her pinny or goading his colleague over his career batting average of 11.51. Even when wickets are docile, the crowd is muted and the bowling is bland, these two are always top value.

Breakfast for some, but for 18,000 members and 4,000 associates they are the official colours of the most exclusive sporting club in the world. On average the wait is over 20 years to become a full member of the MCC, and most members wear the famous tie, but braces, socks, full striped blazers, whilst umbrellas are also inevitably prominent at any big Lord’s occasion. Even though these days their power has largely been commandeered by the ICC, the club still acts as the guardian of the laws of the game, and ‘safeguards its spirit’. The recently formed MCC Cricket Committee, made up of former and current world stars, is an independent force for good in the game.

These Middlesex legends were cricket pin-ups after the war, and although most have heard the stories of Denis Compton arriving at the ground on the morning of a match wearing his dinner suit, fewer will know that ex-fighter pilot Bill Edrich was also essentially a creature of the night – he was cast aside for three years after two successive nights of partying during a Test in 1950. Not that it seemed to matter – they had few equals on the field, and in the dry season of 1947, incredibly both scored over 3,500 runs, notching 30 centuries between them. Two great English cricketing cavaliers.

When rain meets wicket, maths meets cricket. Cricket’s top statistical collaborators came up with the formula after a ludicrous rain break adjustment during the 1992 World Cup semi-final left South Africa needing 21 runs off one ball to beat England. The two men that answered the call for a better way for one-day cricket were Frank Duckworth, editor of the monthly magazine of the Royal Statistical Society, and Tony Lewis, former lecturer and leading light in the Operational Research Society. Both were eminently qualified to apply a scientific approach. They collected data, wrote academic papers, attended conferences and held meetings with the then TCCB, but Frank Duckworth actually had the breakthrough epiphany moment while en-route to Hawaii for a holiday. After a sticky start – ‘unfathomable’ was one early reaction – it is now widely accepted. As Tony Lewis himself says, it is “The method which allows teams to get on with the game and let the effects of the weather be fairly compensated.” The last word goes to Jonathan Agnew and Nick Constable from Aggers’ Special Delivery: “Never pretend to understand it,” they warn. “Only two people do, and you’re not one of them.”