Australia have two representatives and Pakistan’s ever-impressive Sana Mir also makes the list of Wisden’s women’s spells of 2019.  But the women’s game continues to grow further afield, reflected by the inclusion of players from Thailand and Nepal.

Here are Wisden‘s women’s spells of 2019

It’s easy to forget now that last summer’s Ashes started out as a proper toe-to-toe contest. After an English lower-order fightback and a tooth-and-nail defence, Australia only squeaked home in the first game by two wickets and the hosts kept their momentum going into the second ODI, with Tammy Beaumont’s century leading England to 183-4 at the start of the 39th over, already ahead of what Meg Lanning’s side had struggled to chase in the first game, and though Beaumont and Danni Wyatt fell soon after, England still looked set to post a challenging total. 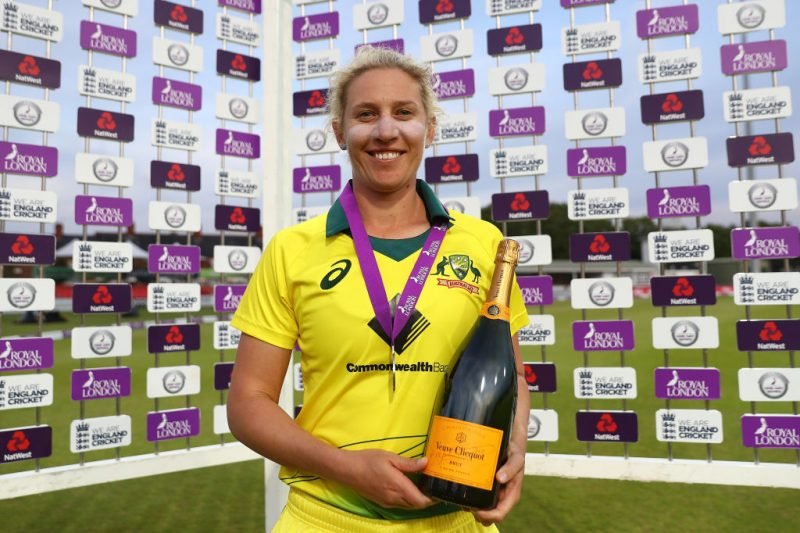 Kimmince was the Player of the Match for her efforts

And then, all of a sudden, they were out for 217, and Australia eased home. The tourists turned to an unlikely source as the chief architect of the collapse, with Delissa Kimmince playing just her 14th ODI in a career spanning more than a decade, and in which she had never before taken more than two wickets in an innings. There was little complex in her method, just a succession of hard-to-pick lengths and hard-to-get-away lines, but the simplicity was devastating, and she left with the third-best figures by an Australian against England in women’s ODIs to her name.

Though it was against Papua New Guinea that Thailand Women confirmed their spot at the 2020 Women’s T20 World Cup, it was victory over heavy favourites Ireland that made one of the year’s most remarkable moments possible. Having made 92 off their 17 overs – judged about par – Chanida Sutthiruang made two key early strikes, bowling Olive Prendergast and Kim Garth with her inswinging yorkers, before returning to bowl the crucial penultimate over. With 11 needed to win, she enticed Leah Paul to hole out first ball before bowling three consecutive dots, leaving seven to be defended off the final over.

In eight attempts across formats prior to their 2019 tour of South Africa, Pakistan had never beaten the Proteas on their own patch, and although the hosts were at something of a low ebb, with the core of the team that took them within a whisker of the 2017 Women’s World Cup final still in place, that run was expected to continue. Pakistan certainly weren’t supposed to skittle them for their second-lowest ODI total.

Sana Mir, as so often, was the key figure, scalping four of the top five as South Africa slumped to 35-5. A tie in the final ODI of the series and a 3-2 T20I reverse would confirm how far the gap between the sides had been whittled down.

It barely even needs to be said that no one who voted for this spell watched it. Of course, no one who didn’t vote for it watched it either. And, in this case that doesn’t really matter. While when proclaiming one performance or player better or worse than another it’s normally a prerequisite to have watched the performances and players in question, this isn’t a list asking for the best spells of the year specifically, but the spells of the year, however you interpret that, and in that gap does Anjali Chand’s six-for-nothing find space to justify itself.

In cricket, greatness can take many forms, and while statistical greatness might be of a limited kind, Chand’s spell is about as statistically great as you can get. It’s not just the world record (for best figures in all T20Is) and it’s not just the hat-trick. It’s that zero in the runs column, that hint at perfection that elevates it. It might only have come against Maldives, and with T20 cricket’s first seven-for having come in 2019, it might not even last for all that long. But Chand deserves her place in the record books, and in this list.

Ellyse Perry’s seven-for, the best figures in women’s ODIs, finished in the upper reaches of Wisden’s women’s spells of the decade, and was never not going to top this list. Here’s what we wrote back in December:

While she needed two tail-end wickets to get the record, the opening spell was an exhibition in high-speed, high-class swing bowling. In her first five overs, she found an average of 1.53 degrees of swing per delivery, bowling outswing jaffas and inswing boomers to wreak havoc among England’s procession of right-handers. Perry had 5-12, the hosts were 21-6, and the Ashes were all but gone. In terms of pure aesthetic quality and otherworldy unplayability, there hasn’t been a better spell this decade.