With the 2020 T20 World Cup on the horizon, 2019 was a year of preparation. It’s of little surprise that four of our top five innings of the year – as voted by a panel of Wisden writers – are from the shortest format.

The continued dominance of Australia is clear to see, while a couple of barnstorming knocks in losing causes couldn’t be ignored.

Here are Wisden‘s women’s innings of 2019

In October Nida Dar made history by becoming the first Pakistani woman to sign an overseas T20 deal, with Sydney Thunder making the historic move to bring her to the Big Bash. No doubt it’s what she accomplished in May that played a role in that decision: South Africa’s bowlers faced the fury of a destructive 37-ball knock that had the record books being rewritten.

An on drive off Masabata Klaas was a positive first sign, but the real sense of destruction came from the heave over midwicket off Nadine de Clerk. The feast came off the spin of Sune Luus and Nondumiso Shangase, with Dar’s freewheeling swings across the line plummeting South Africa into further misery.

The bat was raised after just 20 balls for the second-fastest recorded fifty in women’s T20Is and while she fell to Luus with 13 balls left in the innings, Dar more than played her part in getting Pakistan to their second-highest T20I total.

With Lizelle Lee reeling off a quickfire 60 at the top of the order, South Africa ensured that Dar’s effort wasn’t a match-winning one, but that shouldn’t take anything away from the damage she inflicted.

To come up against Australia and leave with your average suitably healthier is an almighty challenge for most. Chamari Atapattu is not most cricketers. The tale of her barnstorming 178 not out at the 2017 Women’s Cricket World Cup will be told till kingdom come, and in 2019 she confirmed that she isn’t some one-hit wonder, striking two centuries against the Aussies in the space of 10 days. 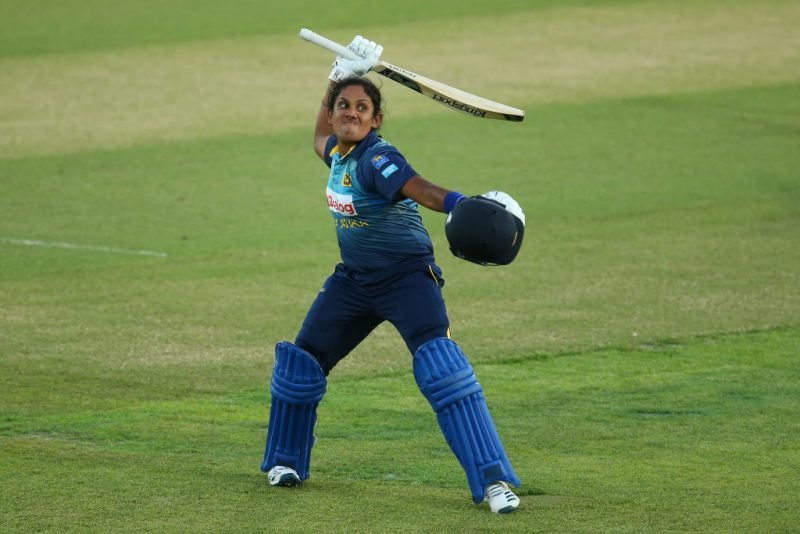 The first was the one that really stood out, and once again it was one-woman domination. The next highest score after Atapattu’s 113? Hansima Karunaratne’s 16. She was elegant through the off side, but the purity of her bat swing through the leg side was the trump card. Atapattu’s acceleration was rapid: the fifty arrived from 44 balls; 22 balls later she departed for her final total of 113.

A target of 218 was out of Sri Lanka’s reach but the lone ranger didn’t end her battle there. In the final match of the tour, Atapattu hit 103, her fifth ODI century. The next highest contribution? 24. A class apart.

Her greatest day out came in October, as she took apart Sri Lanka with the highest-ever score in women’s T20Is. Obviously powerful, Healy’s accumulation was classy too, as proved by the inside-out cover drive that brought up the second-fastest women’s T20I century. The cuts were divine, the straight hits sublime. Even in the best side on the planet, Healy finds a way to stand out.

When she was finally dismissed, 349 balls in, it felt slightly surreal. Were our eyes playing a joke on us? Finally, England had gotten Ellyse Perry out. The last time they’d done that in the longest format was back in 2015. What had followed was an unbeaten double-century two years later in Sydney and then this, 116 runs to continue her all-round domination of the Ashes. As ever with Perry, everything just seemed so predictable, with her sound technique – one now finely tuned for any format of the game (just have a look at her recent T20 numbers) – never letting her down.

Perry being Perry, she finished her second innings of the match unbeaten on 76. Had the match been five days (topical, we know), it would have been madness to bet against her adding 24 more runs.

Ladies and gentlemen, to finish off the Australian trinity, Meg Lanning. Place fifth in Wisden’s list of the greatest women’s innings of the decade, this Chelmsford masterclass was always going to top the tree.

“This Meg girl doesn’t even seem to be trying.”

Presenting Wisden’s Performances of the Decade, brought to you in association with @Perryuniform.https://t.co/xLIR5aA95K

Seventeen fours and seven sixes – at times it felt unfair that England had to be subjected to this torture, with Lanning revelling in her own mastery. The shuffle across the stumps and wristwork that helped the ball over square leg and bring up the century – her second in T20Is – had a touch of arrogance to it: no-one else on the field could have pulled it off. By the time she’d finished on 133, she’d claimed the record for the highest women’s T20I score (before Healy would break it a few months later) and taken Australia to 226-3. England were never alive in the chase; Lanning had buried them.