Jason Holder’s unbeaten 202 in the first Test against England in Barbados in January 2019 matched the unparalleled deeds of the Caribbean legends of the past and ranks No.4 in Wisden‘s Test innings of the year.

When West Indies hosted England in early 2019, not many would’ve predicted the eventual result of the series, let alone the magnitude of the results, as it transpired. England were riding the high of a 4-1 victory over Virat Kohli’s India in the home summer that preceded, followed by a 3-0 sweep of Sri Lanka in their own den. West Indies were at the other end of the spectrum, having been swept away 2-0 by Bangladesh a month ago. They were struggling in limited-overs cricket, too, with not a single series win since October 2014.

Their resurgence was brought about by Jason Holder, their leader who had been copping severe criticism for his side’s poor show. It came at a venue graced by stellar performances by some of the top West Indies cricketers from the past: Sir Garfield Sobers, Gordon Greenidge, and the three giant W’s Sir Clyde Walcott, Everton Weekes and Frank Worrell, to name a few. Holder’s feat stood apart, for it came in a series-defining cause, much like Greenidge’s 226 against Australia in 1991. Holder became only the third man in history to score a Test double-century from No.8, after Wasim Akram (257* in Sydney in 1996) and Imtiaz Ahmed (209 against New Zealand in Lahore). 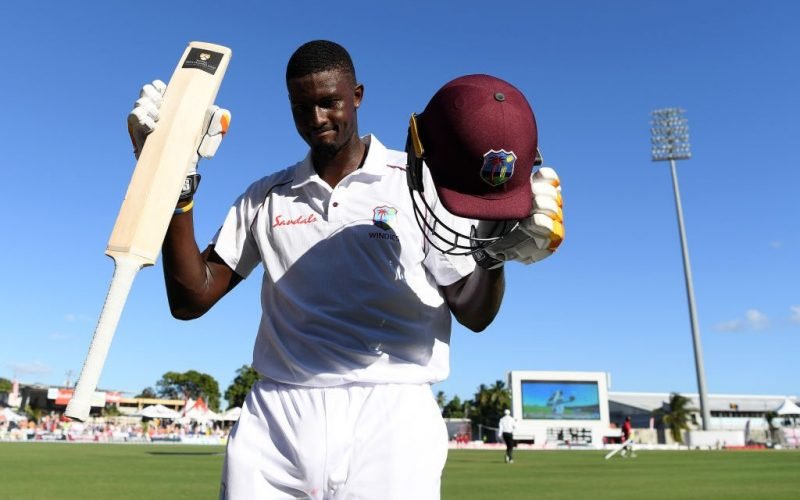 Holder became only the third batsman to register a Test double-hundred while batting at the No.8 position

West Indies, on the back of fifties from Shai Hope, Shimron Hetmyer and Roston Chase, put up 289 in their first innings, after having opted to bat. Kemar Roach then rocked the England batting with his raw pace, bagging a fifer in an innings that ended on a paltry 77. At this point, West Indies stood in firm control, with a healthy 212-run lead, but England clawed back when all-rounders Moeen Ali and Ben Stokes combined to reduce West Indies to 61-5 in their second innings, which then became 120-6 in the final moments of the second day’s play.

Having already bagged the key wickets of Keaton Jennings and his opposite number Joe Root earlier in the day, Holder oozed confidence right from his first ball, dispatching a low full-toss from Sam Curran towards the third-man region for a four. He made the next day his own, unleashing stroke after stroke during a massive 295-run seventh-wicket stand with wicketkeeper Shane Dowrich, who finished unbeaten on 116. The duo batted steadily during the first hour, after which Holder unleashed carnage, racing to 80 off 93 by lunch. Holder came out with similar intent, smashing Adil Rashid, who had already faced the brunt in the first session, for a six off his first ball of the second session. An over later, he battered the leg-spinner right over the sight-screen to bring up his third Test ton in style.

What do you think will be No.1?https://t.co/L8L0zdcCXN

Runs kept flowing from Holder’s blade, through some long hits into the stands and some classic drives in between. England weren’t offered a sniff whatsoever, barring a thick outside edge off Ben Stokes that went well wide of Root, who had positioned himself at first slip. The skipper took the lead up to 600 with a brace towards mid-wicket in the 100th over of the innings, before racing into the 190’s with a soaring hit down the ground. Three overs later, a short-arm pull over mid-wicket got him to his maiden double hundred, which was celebrated with a triumphant leap and a fist pump, and was acknowledged with a resounding applause by all present at the Kensington Oval.

The writing was pretty much on the wall for England, and Roston Chase’s remarkable  8-60 dismantled them for 246 in the second innings, giving West Indies a massive 381-run win: their third biggest in terms of runs. As for Holder, he climbed to the top of the Test rankings for allrounders, a position he holds to date.

Of all the eight sixes he hit, the one that brought up the three-figure mark probably ended up being the most memorable, not merely for the feat, but also for the execution. Adil Rashid, clueless and low on confidence, had switched to around the wicket to force the batsman to play cross-batted strokes. Holder, on 94, nonchalantly dismissed a full-pitched delivery around leg-stump right over the bowler’s head, to bring up his ton and further stamp his authority.