Taha Hashim on a fighting comeback hundred from Steve Smith against England in the first Ashes Test at Edgbaston, No.3 in Wisden’s Test innings of 2019.

Steve Smith was peculiarly quiet at the World Cup. Marking his return to international cricket after the sandpaper, the tears and the overreaction of Newlands, four half-centuries was an acceptable showing. But Smith’s former growler of a lieutenant, David Warner, made the real noise, hitting 647 runs across 10 innings.

In Smith’s case, however, the red ball had always been easier on the eye. From December 2015 to August 2018, nobody sat above him in the Test batting rankings, with Bradman’s name regularly dropped in close by, the comparison growing less blasphemous by the innings. The average stood head and shoulders above his counterparts and prior to his 12-month ban from the Australian set-up, an Ashes win as captain had kept his box-ticking exercise going. Perhaps the only way was down.

But here he was, at Edgbaston, having not having played any first-class cricket since his last Test match. I’d caught a glimpse of him in whites in an Australia v Australia warm-up match in Southampton, with barely a soul in attendance, and been left slightly bemused by a fidgety first-innings return of 9 hallmarked by Smith’s insatiable desire to wallop Pat Cummins over extra cover. To think he was out of nick would have been erroneous, though. As became abundantly clear over the next two months, the eccentricities at the crease feed Smith’s soul, confirm his lust for runs, differentiate him from the crowd.

For quite some time it was the events at the other end that held your focus. James Anderson’s calf injury seemed to make Stuart Broad and Chris Woakes even more relentless, with Australia reduced to 122-8. The hosts had drawn first blood and a 1-0 looked set to follow. 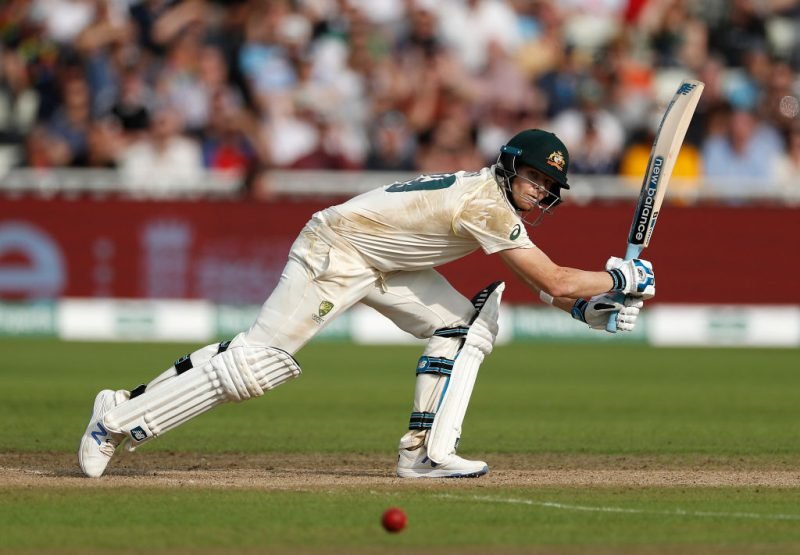 The contortionist does his thing

In the tenacious Peter Siddle, though, Smith was finally able to find a partner with some grit to let him make hay, while Nathan Lyon was another valiant comrade later on. And so through a 219-ball stay, there came a reminder as to why Australia had suffered so desperately in Smith’s absence. As ever, the pads should have had a no-go zone sign for England’s bowlers, but even when the line outside off was located, the contortionist that is Smith remained untroubled. The pull/clip through the leg side, lined up before the release of the ball, was Smith playing the role of puppet master to perfection.

The joy for three figures betrayed the fact that this was the 24th time he’d reached the landmark in Test cricket. But then again, these were special circumstances. By the end of his stay, he was in the mood for a slog, peppering the on side with thumps that continued to evade the men on fence patrol. Bowled having contributed over half of Australia’s total, he’d ruined England’s day. It would become clear quite soon that he was here to ruin England’s summer.

A century followed on day four, and at Lord’s there came his frightening battle with the new kid on the block, Jofra Archer. Struck down by concussion, normal service was resumed with a double hundred at Old Trafford. The soundtrack of his summer, that of the boo-boys, was growing quieter.

Few who were there will forget the moment Smith departed the field on day four at The Oval. Dismissed for just 23, he trudged off having finally failed to raise his bat for fifty in the series. The glee of the masses was put to bed quickly, however, as they rose in applause, acknowledging greatness. With late summer sunshine draping itself over south London, an incredulous comeback came to a picturesque close.

With just Lyon to keep him company, there’s the very real possibility that the comeback ton isn’t going to happen. But that would be a curse to this marvellous tale in development on the opening day of a series that is set to be doused with theatricality. So it feels right when Ben Stokes lets a half volley fly with Smith on 99. A shuffle across his stumps is followed by a drive through the covers that signals Isa Guha, up in the commentary box, to proclaim what we’re all thinking: “Steve Smith is back”.