Sachin Tendulkar, in an unsparing assault, single-handedly took on the world’s top-ranked ODI side, scoring a 175 that nearly stunned them. Akshay Gopalakrishnan relives the knock, which is No.5 in Wisden’s ODI innings of the 2000s.

If ever there was an example of a player single-handedly trying to win a game for his team, this was it. No, seriously. This was something else. Bowl fast, bowl slow, turn the ball, pitch it up, drop it short, stray on the pads, tempt him outside off – it didn’t matter. Sachin Tendulkar simply could not be stopped. When he had a partner on song, he was brutal; when wickets fell at the other end, he was even more savage.

Three of Tendulkar’s top ODI innings came in the last five years of his career – this, the unbeaten 163 against New Zealand, where only cramps could stop him, forcing him to retire hurt, and of course, Mount 200, which no man before him had scaled. But it was this innings, in the face of a daunting 350-plus chase against Australia, which meant it came alongside past baggage that included a lost World Cup final, that was arguably the finest of all.

With Virender Sehwag cracking a series of boundaries to kickstart India’s chase at a high gear, Tendulkar was afforded the option to start cautiously against Ben Hilfenhaus and Doug Bollinger. In fact, the partnership with Sehwag was the only one Tendulkar didn’t dominate. Soon, he settled into some beautiful strokemaking.

The batsmen that came on the heels of Sehwag’s dismissal couldn’t build on the good work done by India’s openers. Gautam Gambhir, Yuvraj Singh and MS Dhoni, the captain, each fell for single-digit scores, but India added 96 runs for those three wickets, thanks to Tendulkar’s belligerence.

It took Suresh Raina’s arrival for Tendulkar to find some support again. He zoomed to an 81-ball hundred 20 balls after Raina’s arrival at the crease, and thereafter, the master continued to wheel away towards the target, with some delightful strokes, married with loads of power.

His daring in taking on spinners Nathan Hauritz and Adam Voges, whom he repeatedly charged at, made for particularly riveting viewing. With Tendulkar in this kind of form, it was to Australia’s utter horror that Michael Hussey spilled him on 135. Tendulkar drilled the same player through the covers to raise his 150 in 122 balls. 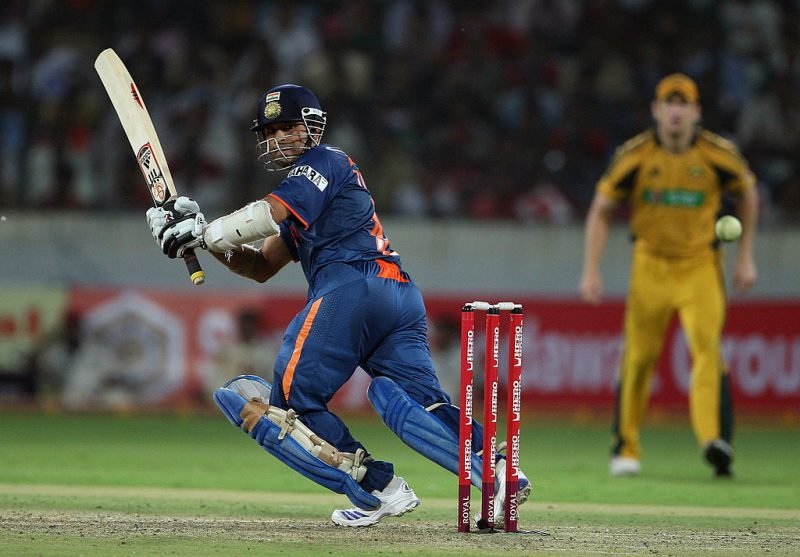 Once that landmark was knocked down, Tendulkar began getting cute, bringing out his innovations as the asking rate continued to challenge India, even as Raina kept the score ticking at a rapid pace, through a combination of hard runs and timely boundaries. It was only when India were on the brink of 300 that the partnership was broken, by Watson, who had Raina top-edge a pull to a short ball.

But until Tendulkar was at the crease, Australia could never breathe easy. Ravindra Jadeja produced a fine cameo of his own, as India marched on towards the target … until Tendulkar tried to get cheeky again, and paid the ultimate price for it. Having got down for a scoop to greet debutant Clint McKay at the start of the 48th over, Tendulkar picked out short fine leg. There was a marked difference in how he had played the shot: where batsmen usually try to time the ball, Tendulkar actually made an effort to hit it from one knee down, perhaps to cope with the extra bounce.

Australia went wild in celebration. A few short hours later, they would still be celebrating, through the night. A despondent Tendulkar walked up to the dais to accept the Player of the Match award. This match had been all him. This was Tendulkar at his very best, with the combined forces of the opposition bowing down to his genius. But all of that wasn’t enough to halt the world’s No.1-ranked ODI side.