Held back for the final against the world’s most formidable batting line-up, Sri Lanka’s enigma wiped out an unsuspecting Indian batting order, on his way to a record-setting performance.

Before the final of the 2008 Asia Cup, India had faced Sri Lanka once before in the tournament, during a Super Four game, for which Ajantha Mendis was rested. There were suggestions that Mendis, then still a fresh entrant at international level, was being saved for the final, lest his mystery be unpeeled. If that was indeed the case, then it turned out to be a masterstroke, as Sri Lanka unleashed their enigma on the most important day of the tournament, and not a man in the opposition knew what to make of it.

Sanath Jayasuriya’s dazzling hundred had already reeked of brilliance and given Sri Lanka 273 runs to defend – a position that had seemed unlikely after they had been reduced to 66-4. But contrary to their start, India’s was rousing, so much that it seemed like they may run away with the game with ample time left spare. Virender Sehwag laid into the Sri Lankan attack with a hellish onslaught. It forced Mahela Jayawardene to introduce Mendis as early as the ninth over, contrary to his wishes. By the time Mendis was done, he likely had his captain wondering why he hadn’t brought him into the attack sooner.

Sehwag, who had played just about every stroke that there is to be played, and pierced every corner of the outfield that there was to be pierced, tried to stamp his authority on the newcomer. He gave him the charge first ball, but Mendis was too difficult to pick so retreated to his defence instead. Undeterred, he sprang down the track again the next ball. But this time, Mendis had astutely adjusted his flight and his leg-break spun past the outside edge and settled into the gloves of Kumar Sangakkara, who was left with an easy stumping. 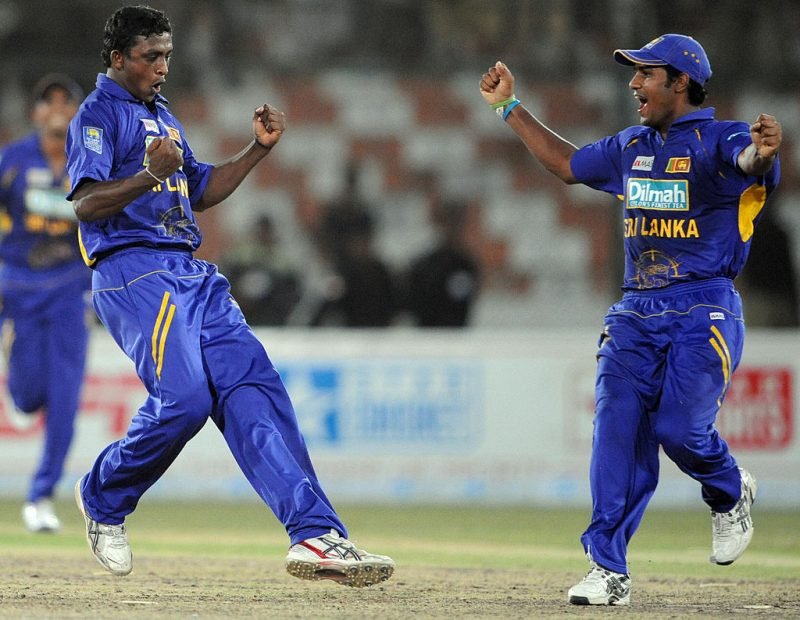 Ajantha Mendis wheels away in celebration after dismissing Irfan Pathan

It was as though that one dismissal had cast a spell over the rest of the line-up. One batsman after the other went back as quickly as they came out, as Mendis, playing in just his eighth ODI, held the world’s most formidable batting unit under a trance. So incomprehensible was Mendis that Suresh Raina tried to pull a length ball and lost his stumps.Yuvraj Singh suffered the same fate, playing all around a length ball that skidded onto his stumps. With Mendis working this kind of magic, Rohit tried to work him across the line. This was a recipe for disaster and he was duly trapped lbw. Just like that, India had gone from 76-1 to 97-5.

Keeping India’s batsmen trapped on neither foot with his length, Mendis forced one indiscretion after the other out of them. By the time he was done, Mendis had picked up the Asia Cup’s first six-wicket haul. His eight overs cost just 13 runs, and 36 of his 48 balls were dots. India went crashing down by 100 runs, bundled out for 173.