Ricky Ponting’s 156 against England in 2005 is No.3 in Wisden’s Test innings of the 2000s. Aadya Sharma recalls the gritty Ashes masterclass.

Steve Waugh billed it Ricky Ponting’s graduation to Test captaincy. For a skipper with an unmatched Test record, Ponting’s magnum opus, surprisingly, came in a draw, but it was his remarkable tenacity that single-handedly kept the 2005 Ashes level after the third Test.

In a near-seven-hour effort, Ponting first endured the storm, then rode it, playing out 275 deliveries against a pack of raging English seamers, even making Australia’s unlikely pursuit of 423 look like a possibility at one stage.

On a dry fifth-day pitch, Ponting spent the first half of his 156-run marathon switching between his defensive and expressive styles, riding the swing as late as he dared. The challenge was thrown at England when, on 14, he clattered a flat six off a Flintoff bumper, an imperial thwack that carried the sonorous sound of a metal gong, and set the juices flowing.

Ashley Giles, persisted with at the other end to gag the run flow, kept bowling from over the wicket, but was purposefully defied by Ponting. Just before lunch, Simon Jones’ booming inswingers tried to eke out a wicket, but it was not to be. 300 runs in 70 overs was still largely improbable. It was survival all the way.

The tricky post-lunch phase had its edgy moments, including a nervy edge to the third man fence, but Ponting was unflinching. At the other end, his teammates weren’t as dogged in resistance – barring him and Hayden, none of the top seven came close to playing out a hundred deliveries.

With half a day still to go, Giles’ erratic lengths gave Ponting the chance to garner quick runs. Anything that was dropped remotely short on leg, Ponting would drop deep in his crease and wristily manoeuvre the ball to the leg side. If on the off or middle, Ponting would rock back and smear it through the covers. 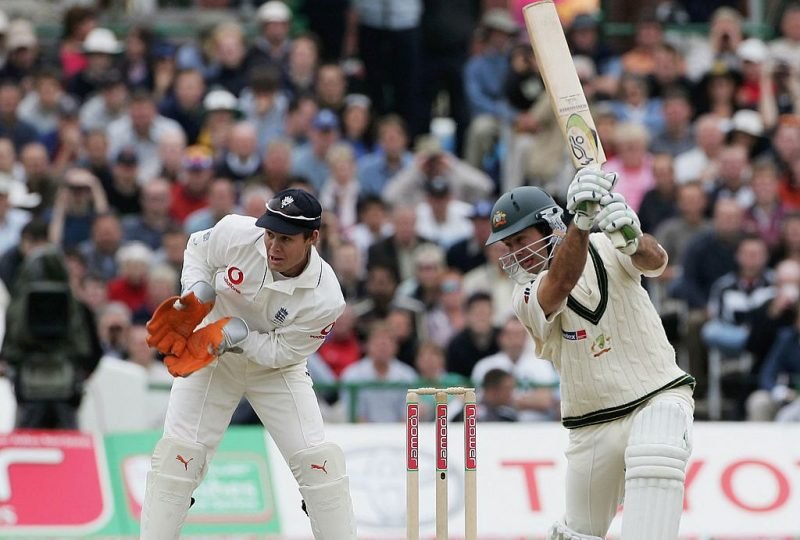 Ponting hit 16 fours and one six in his marathon knock

Despite Ponting’s defiance, Australia kept sliding further, losing Damien Martyn, Simon Katich and Adam Gilchrist in the second session. Unmindful, the skipper ticked off the magical three-figure mark with a flourishing drive in the 70th over. It was his 23rd Test century, but there can’t have been any timed better. Inch-by-inch, he was dragging Australia home.

With just over 30 overs left in the tank, Ponting must have thought – ‘Heck, why not?’ and decided to shed the shield and prance towards the target. Jones’ pace was treated with a sudden, newfound liveliness. Anything on the legs was wristily dismissed to the fence. On 140, and about 80 runs adrift, he unleashed a ferocious cut over point. Was there a whiff of an unlikely heist?

Related Story: Players with the most Test appearances: Cricketers with more than 100 matches

Running out of partners after Shane Warne’ handy knock ended, Ponting decided to slug it out. And then, with less than five overs to go, an uncharacteristic blip in focus saw him glove behind a Harmison bumper. A distraught captain trudged back, convinced that he had thrown the game, but Australia survived dramatically, living to fight another day in the series.

That day, even his staunchest critics would have marvelled at Ponting’s resilience in distress.