A painfully mismatched contest saw Sourav Ganguly’s side falter on the biggest stage, and nothing signified the gulf between the two teams better than Ricky Ponting’s boundary count that day – eight sixes and four fours.

Ricky Ponting’s mastery headlined Australia’s 359-run total in the 2003 World Cup final, a score that threw the trophy clear of India’s reach by the halfway mark itself. It was an atypical Ponting innings, not in terms of domination (for Ponting seldom treated the opposition meekly), but in the relentless manner in which he pummelled a listless India attack.

Trudging into the arena after 14 overs, Ponting had a ready platform laid out for him. Harbhajan Singh, buoyed by Adam Gilchrist’s wicket, was bowling with his tail up on a surface that had grip and turn. Ponting knew he had to bide his time against the off-spinner, and donned the accumulator’s role. His first 25 balls accounted for only 14 runs.

Damien Martyn’s entry, and the ease with which he went about his run-scoring, rubbed onto Ponting, and together, the two went about scoring at a breezy rate, India’s wayward lines and wobbly fielding helping their cause. Ganguly, trusting his bevy of part-timers, dutifully pressed Sachin Tendulkar, Virender Sehwag, Dinesh Mongia and Yuvraj Singh into action one after another, hoping to slow down the game. And it did, in theory, for the next 20 overs saw them score at just about five an over. 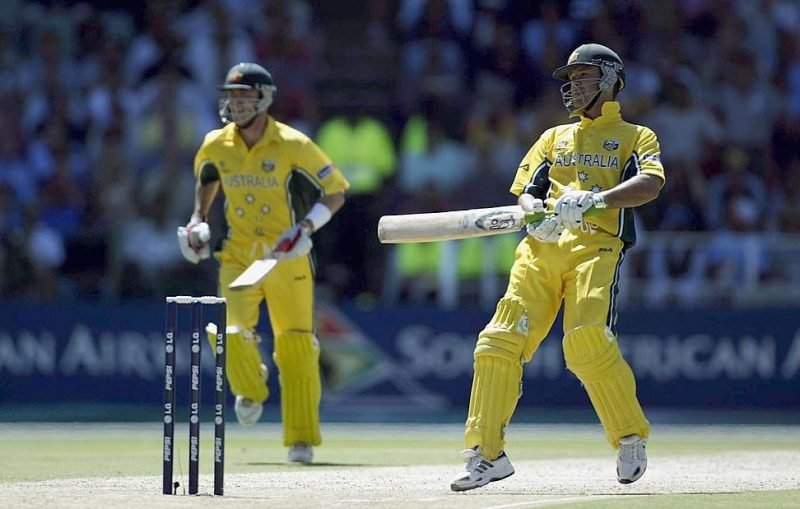 By then, Ponting had sized up the opposition. There were no big strokes yet, but the game was slipping away from India. At 226-2 from 38 overs, Ponting knew he was sitting on a goldmine. Once he secured his fifty, he shifted levers. And how.

Two successive sixes off Harbhajan, India’s best bowler of the day, kicked off a calculated onslaught that lapped up every loose ball on offer (and there were several). A slow full toss by Ashish Nehra was disdainfully slapped for a one-handed six; Mongia insipid left-arm spin was carted for a humongous six over square leg. Zaheer Khan, all over the place that day, was launched for a four and six off consecutive deliveries, the first one an authoritative thump down the ground, and the other a baseball-like club to cow corner. No one was spared.

In a span of six overs, Ponting catapulted from 50 to 95 off 22 deliveries. India didn’t know what had hit them.

Once he passed the three-figure mark, Ponting’s belligerence gathered further steam. With less than five overs to go and the 300 already up, he threw his bat at everything. By then, India’s clueless bowlers were feeding full tosses for Ponting to dismiss. His last 40 runs came off just 18 balls. No wonder a section of deluded fans cried foul with the ridiculously outlandish ‘spring in bat’ theory.

Javagal Srinath’s final over of his career was a limping array of six deliveries. Ponting clobbered the penultimate ball for a stunningly clean six, and lobbed a four over short fine-leg to end India’s misery at 359. Martyn’s stunning 88, scored with a broken finger, was lost in all the din.

In hindsight, India had shown up for the match with the aim of putting up a strong fight. Australia had walked in to win the cup.