There was plenty to discuss and ponder, and a lot of disagreements about the picks in this side, and particularly the team combination. It wasn’t pretty.

But at the end of it all, the panel settled on this team, which came closest to satisfying everone’s strong wishes and beliefs.

It is a side that comprises some of India’s best Tests cricketers in the Nineties, a decade in which the foundations for a golden generation were laid. What do you make of it?

Sidhu played just 38 Tests in the Nineties, but he was, by every measure, India’s best opener in the format in that decade. With 2,517 runs at a touch under 45 in the format that decade, Sidhu was India’s fourth-highest Test run-scorer in the Nineties, and a closer look at his game shows why: He could be a marauding batsman – in the 1993/94 Test against Sri Lanka in Lucknow, against an attack comprising the legendary Muralitharan, Sidhu hammered a 124 made up mostly of eight sixes. His Test high score, a 201 against West Indies, was another extreme – a gritty knock made up in 11 hours of batting. He was a unanimous choice among the panelists picking this XI.

This was one of the more contentious choices the panelists had to make. The other option was going with Rahul Dravid as Sidhu’s partner – it wasn’t a popular choice. Prabhakhar’s fine average in New Zealand (58.75) and Sri Lanka (51.3) in an era when India struggled overseas, worked in his favour. As did his abilities with the ball in hand – he took 79 Test wickets in the Nineties. In all, Prabhakhar, in just 33 Tests that decade, made quite an impression.

🚨 Presenting Wisden's India ODI team of the 1990s 🚨@ojerson8, @Aadya_Wisden, @Sanks07 and @GedeRoshan went down memory lane and settled on the following team.

Dravid made his debut in the latter half of the decade – in 1996 – but would still end up becoming the third-highest run-scorer for India in Tests that decade. Dravid made a 95 on debut at Lord’s. But he would, in all, score six centuries in 34 matches, and here’s the striking feature – five of them came overseas. A young Dravid’s maiden ton for India came in Johannesburg in 1997, against Allan Donald, Shaun Pollock and Co, when he scored a fine 147. He would go on to reach three figures in Harare, Hamilton (twice in the same match), Colombo and Mohali – many, many more would follow in the subsequent decade. It was the first steps of a legend.

The first name on the list for all the panelists. Tendulkar was a no-brainer. He was India’s highest run-scorer in Tests in the Nineties, and the sixth-highest in the world. Furthermore, nobody who scored a minimum of 3,000 runs in the Nineties averaged close to his 58 – and he was just 26 by the end of the decade. It was a stellar decade for Tendulkar, during the course of which he carried India’s hopes countless times, a fact no more evident than when he scored that 136 against Pakistan in Chennai. There were 22 centuries in all, including in England, Australia, Sri Lanka and New Zealand. He started the decade as a child prodigy. He ended it as a legend.

For reasons unsavoury, Azharuddin’s India career came to a sudden halt shortly after this decade, but there was no denying his impact on the Indian side in the Nineties. As a batsman, few possessed more silken strokeplay – the flick was a trademark, and it’s something that proudly adorns his Twitter handle @azharflicks – and those who watched his 121 at Lord’s still talk about it. He had some great wins as captain on home soil, and in the field, he was ahead of his time. He scored 14 centuries in all, that decade, with as many as 10 of them coming from the No.5 position he made his own.

Ganguly announced his arrival with consecutive centuries in England in India’s 1996 tour, the first a 131 at Lord’s and then a 136 in Nottingham. There would be five more centuries before the end of the year, as Ganguly shored up India’s middle order in the latter half of the decade, all at a terrific average of just a shade under 50. During all those knocks, there was grace and precision in his strokeplay, and plenty of oohs and aahs at his drives and off-side stroke-play. He would go on to become one of India’s greatest Test captains in the next decade.

Mongia was an assured, solid wicketkeeper, and a reliable batsman in tough situations. In the Nineties, a wicketkeeper wasn’t expected to do much more than that – he ended the decade with 99 dismissals in 40 matches, including seven stumpings. With the bat, the highlight was the 152 he scored against Australia in Delhi in 1996, while opening the batting. It would remain his only Test century.

Another shoo-in to this XI. Kumble ended his career as one of the game’s most-heralded spinners, and certainly India’s greatest bowler. During the course of his storied career, there were many highlights, but perhaps the most historic was his ten-for, when in Delhi in 1999, he took all ten Pakistan wickets of the innings himself. He would go on to break plenty of other records in the subsequent decade, while always learning and evolving as a leg-spinner. A role-model.

The fact that Raju makes this XI, despite playing only 27 Tests and having an up-and-down career, is quite telling of India’s bowling stocks in the Nineties. Raju was an aggressive bowler, never afraid to give it flight, but he could never quite nail down a place in the side. He still took 92 wickets in 27 matches in the Nineties, the highlight being the 1994-95 series against West Indies, when in three Tests, he claimed 20 wickets. He was more of a threat at home than away, but that, in essence, was India’s story of the Nineties. 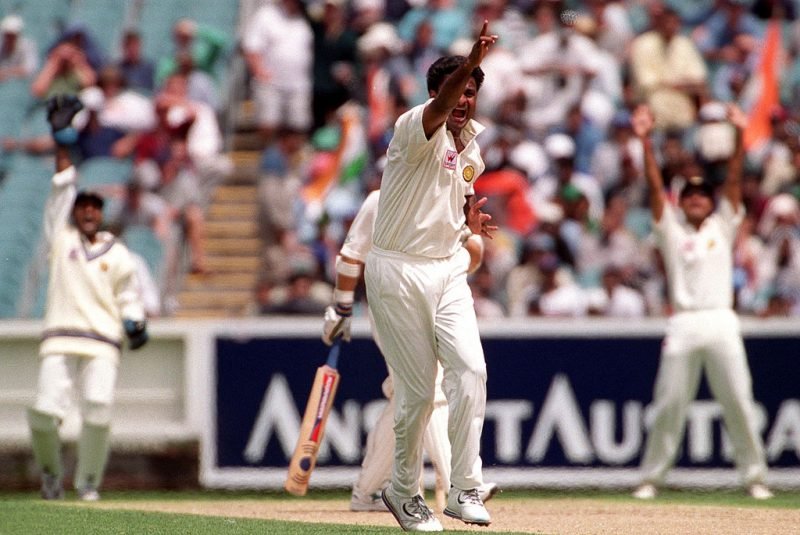 Throughout the Nineties, Srinath held up India’s pace attack, and dragged the team out of the mud on many an occasion. He was fiery – quite a rarity in Indian cricket in those times – and it’s always tempting to wonder what would have been had he had more support. He was particularly excellent in Indian conditions, somehow figuring out how to get the best out of dustbowls otherwise made for the spinners’ benefit – like the 6-21 he took against South Africa in 1996/97 in Ahmedabad.

Since making his debut in 1996, Prasad became an important new-ball partner to Srinath in India’s attacks, with his ability to move it both ways, especially in helpful conditions. He was tall, hit the deck hard, and was a good foil for Srinath’s pacey approach at the other end. Prasad’s highlight came in the 1999 Test in Chennai against Pakistan, when his 6-33 nipped Pakistan out in the first innings, during which he claimed 5 for 0. He was most effective abroad though, with 57 of his 84 wickets in the Nineties coming overseas.