Taha Hashim analyses an impressive display from Sam Curran on the opening day of the first Test between England and South Africa.

In getting himself on the park, Sam Curran had cleared the first hurdle. He’d survived the obstacle that has tripped up a number of his colleagues in recent days: illness.

England’s tour of South Africa has had a peculiar start, with each day bringing the news of another man down and out. Two of the early sufferers, Jofra Archer and Stuart Broad, recovered in time for this Test, although without the comfort of a warm-up match behind them. James Anderson made his much-awaited 150th Test appearance, but it would have been a stretch to think he’d produce the spectacular after a lengthy lay-off with injury. With Ben Stokes suffering from dehydration and spending plenty of time off the field, The Kid had to deliver. He did.

Let’s get the figures out of the way: 4-57 from 19 overs. While an obvious threat at home, Curran entered the match with eight wickets from six away Tests at an average of 56.12. At the start of the year the job of taking the new ball against West Indies was a step too far, while the lifeless pitches on the tour of New Zealand did little for him and the rest of England’s attack. 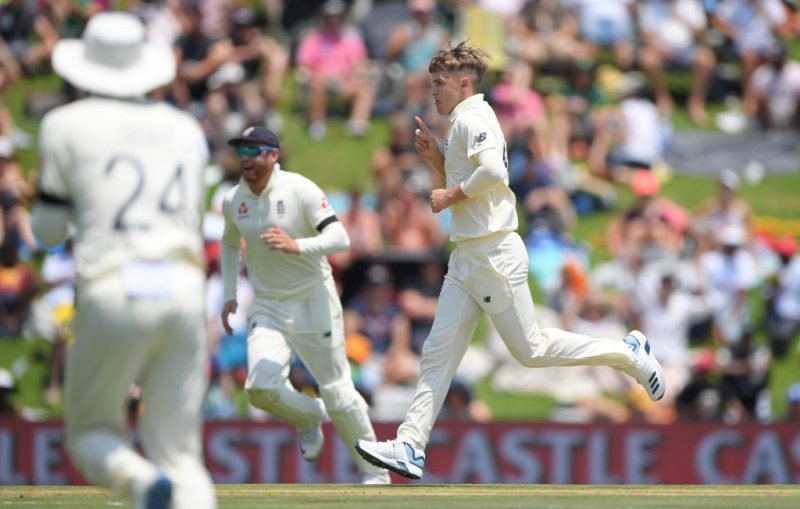 From the get-go, Centurion seemed like home. Well, not entirely. His first over was both sublime and dour: the loose ball first up was sent for four by Aiden Markram before an outside edge was induced just two balls later but failed to carry. And then came the wicket from nowhere, because that’s just what he does, with that special saying in his armoury: “the knack”. An innocuous delivery was chipped to the jubilant Jonny Bairstow at short midwicket and he was up and running.

After the dismissal of Markram, it was the quality and persistence of Curran’s swing that did the damage. According to CricViz, his five-over spell in the first session – in which he conceded just eight runs – saw him swing the ball at an average of 1.56 degrees. Rather than relent in the second session, he upped the ante, averaging 1.88 degrees of swing with the older ball in another five-over spell. The wisdom he showed was what impressed the most; the threat of the inswinger was supplemented with the killer blow from the ball that angled across and took the edge. Rassie van der Dussen and Dwaine Pretorius both fell for that particular trap. Welcome to Test cricket, fellas.

The greatest challenge England faced today was Quinton de Kock, whose freewheeling counter-attack was not too dissimilar to some of Curran’s own Test knocks. That gorgeous bat swing sprayed the ball to all parts, with Curran taken for 14 in his seventh over. The South Africa wicketkeeper had skill on his side and a bit of luck, too. The inside edges didn’t find the stumps and an outside edge benefitted from Stokes’ honesty.

The insatiable desire to make a mockery of Joe Root’s off-spin also could have landed him in trouble, with a high hit down the ground landing safely. On 95, a Test century looked a formality. Curran’s ability to keep the ball moving was what kept him in the hunt, and an outswinger nabbed the edge to leave de Kock looking crestfallen. Not long after, a maiden Test five-for looked to have been achieved, but a review showed that Keshav Maharaj’s bat had gotten in the way before the pad took a blow. With one South African wicket left, tomorrow will graciously offer another chance.

For now, Curran should take this performance and use it as a benchmark. Too often he’s found the odd wicket but still looked a bit-part player in proceedings, with his more established teammates showing greater persistence in getting the headline-grabbing haul. Prior to this Test he had 27 wickets from 13 Tests at an average of 31.27. It’s not a record that makes you undroppable as a third or fourth seamer. Much is said about his talent with the bat, but for the foreseeable future it’s with the ball that he has to justify his place.

Performances like this remind you of just how outstanding a talent he is across disciplines and with a significant overseas haul to his name, another box has been ticked in this already impressive career. He’s a more canny operator than the one who took on West Indies at the start of the year, and to extract such life out of the Kookaburra is a worthy achievement. If 2018 was the breakout year, 2019 has been a time of learning.

Today there rarely appeared a moment when he didn’t look like he was going to cause South Africa some bother. With the fall of each wicket, it seemed inevitable that another would follow and that Curran would be the answer. There was joy in the way he scurried in, beauty in the conventional swing that stayed with him throughout the day. He set the rhythm and never relented.