The final morning of England’s victory in the third Test over South Africa at Port Elizabeth was something of a curate’s egg.

England looked to be surging towards victory when Stuart Broad struck in the first over. Vernon Philander gave Ollie Pope his sixth catch of the Test, making him only the second Englishman and sixth overall to complete the double of a century and half a dozen grabs in a single game. The list is an impressive one – Steve Smith, Shane Warne, Matthew Hayden, Garry Sobers, and Frank Worrell are the five Pope has joined.

Dom Bess, another youngster who impressed, claimed his sixth wicket of the Test match to bring his Test bowling average under 30. He has now taken his wickets at 29.72 runs apiece, slightly below the figure of one of England’s great offspinners, Graeme Swann.

Joe Root’s team were held up by some lower-order biffing by Kagiso Rabada, Keshav Maharaj and Dane Paterson. A Sam Curran run-out eventually sealed the win by an innings and 53 runs, only their fifth overseas innings win this century and their first since the last of the three they claimed on their 2010/11 Ashes tour of Australia. 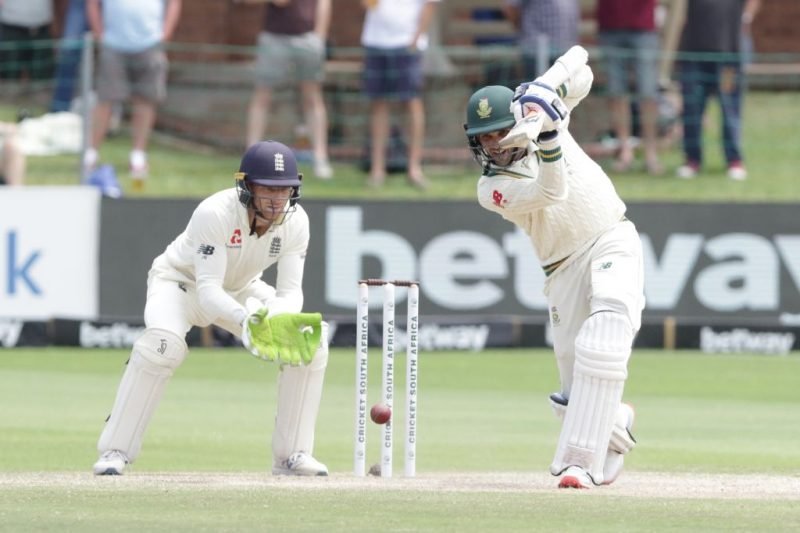 Keshav Maharaj had some fun during his stay at the crease

The real highlights of the morning session however came from the bat of Maharaj, who at one point hit three fours and two sixes from the first five balls of a Root over. Four byes off the final ball meant the over had leaked 28 runs, the joint-most expensive in Test history. Having bided his time early on, blocking his way to 22 off 81 balls, Maharaj then smashed 49 runs off his next 17 balls.

With Paterson also teeing off, the last-wicket stand swelled to 99 runs in 12 overs before Curran’s decisive intervention. It was the highest tenth-wicket partnership made following on in Test history and South Africa’s third-highest for the final wicket.

Root removed himself from the attack after his record-breaking over, and couldn’t manage to get a five-wicket haul despite bowling 10 overs on the bounce to begin the morning session. However, his eventual figures of 4-87 were still the best by an English Test captain for 36 years, since Bob Willis claimed 4-51 against New Zealand at Christchurch in 1984.

With victory England claimed a come-from-behind 2-1 series lead, and with one Test to play, have retained their hold on the Basil D’Oliveira Trophy. It marks the first time since 1957 that England have won consecutive Tests in a series in South Africa.