After Moeen Ali failed to get England over the line in the first T20I of their series against South Africa, CricViz analyst Ben Jones writes about how England should best use one of the world’s best players against spin in T20 cricket.

Royal Challengers Bangalore are playing Kolkata Knight Riders at Eden Gardens. Virat Kohli’s RCB are in a dismal run of form, having lost eight of their last nine matches; KKR are having a mixed season, but are unequivocal favourites for this game.

Yet, led by a masterful 58-ball ton from their skipper, RCB get ahead in the game. They want to make the most of a solid start (losing only one wicket in the Powerplay), so they promote the best player of spin in the side when the second wicket falls. He’s tasked with taking down the spin duo of Kuldeep Yadav and Piyush Chawla, and he does it with aplomb. He takes Kuldeep for 45 (15), despite – as a left-handed batsman – it being an unfavourable match-up from his point of view. It’s the most runs any individual batsman has taken off Kuldeep in a T20 match. RCB make 213, and win, arresting their slump.

The batsman in question? Moeen Ali.

Moeen is a very specific sort of player. In many ways, he is the exact opposite of most T20 batsmen, and the sort of player – or rather, he is perfect for a role – that is hugely undervalued in the current T20 environment. He hits spin, and he hits it hard.

Moeen is the only Englishman to score at over 10 runs per over (rpo) against spin since the 2016 World T20. Some of that work has been done on small Blast grounds and bowling of varying quality, but some of it has been done at the very highest level of T20. It’s a remarkable statistic. 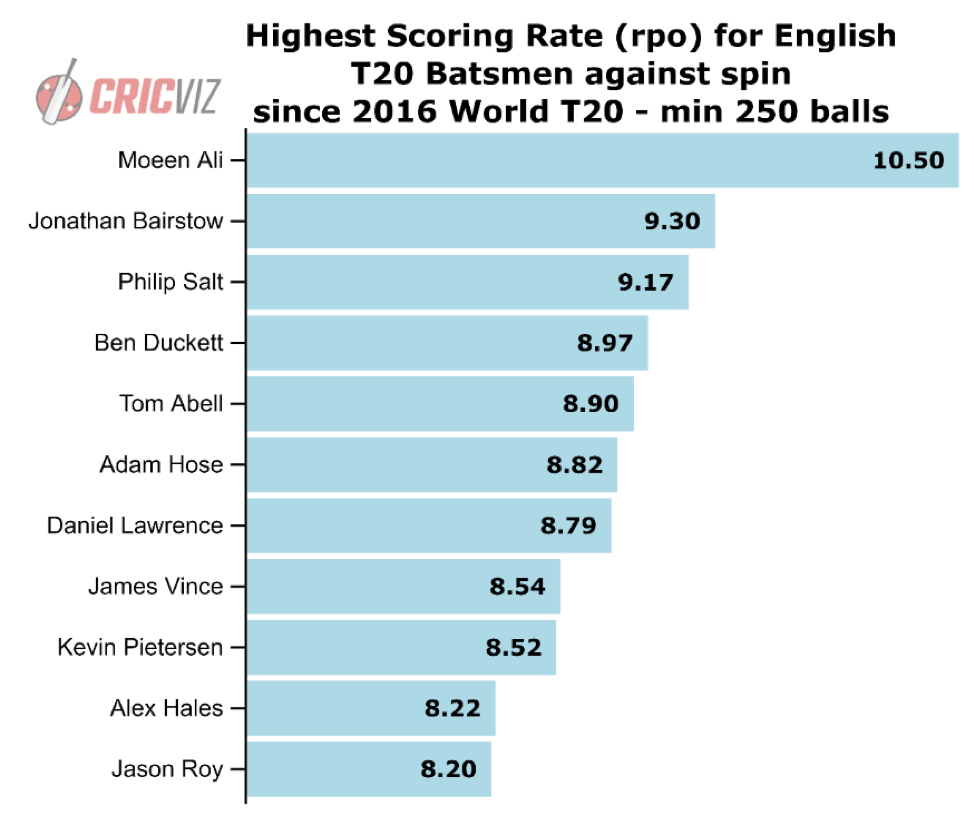 What’s more, that isn’t simply an indictment of English batting against spin – his record compares well on a global level as well. Chris Gayle is the only man of any nationality to score as quickly as Moeen against spin in the middle overs over the last few years.

This is pretty unusual, and it marks Moeen as an outlier in the game more generally. Spin is more economical than pace in T20 cricket across the board, and a genuine preference for facing it is rare. Guys who can biff it around with pace on the ball are impressive, but fairly common; guys who can biff it against spin, not so much. That’s why RCB saw fit to promote him to take on Kuldeep. Playing spin in the middle overs is tough. 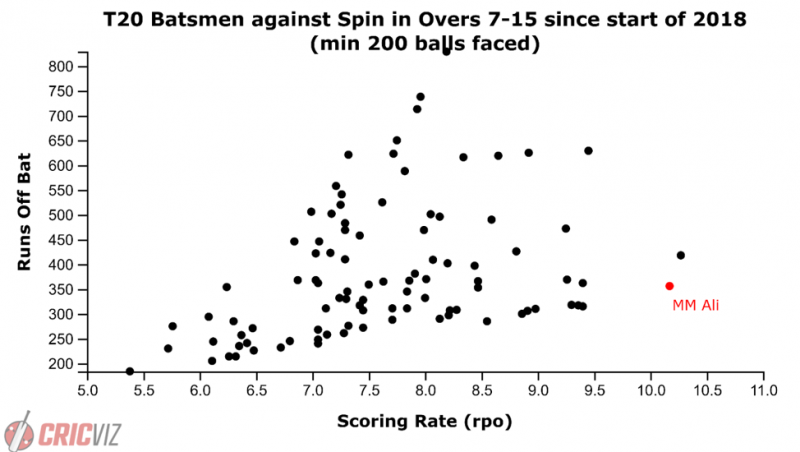 Yesterday, in the 1st T20I of the three-match series against South Africa, England chose to bat Moeen at No.7. By the time he arrived at the crease, England were in the final stages of mucking up their chase; as he walked in, England had a 30 per cent chance of victory according to WinViz. They needed their finisher to turn things around.

Moeen was facing Lungi Ngidi and Beuran Hendricks, seamers who were more than aware that slower ball variations were the way to go on this pitch. By the end of the match, pace off deliveries had an economy of 7.68rpo, compared to 10.43rpo for pace on deliveries. Moeen has struggled against these slower deliveries across his career; against balls from seamers slower than 120kph, he gets out every 11 balls, but against anything quicker he gets out every 21 balls. He was not suited to taking on the kind of bowling he was going to face in this situation. He failed to get England over the line. 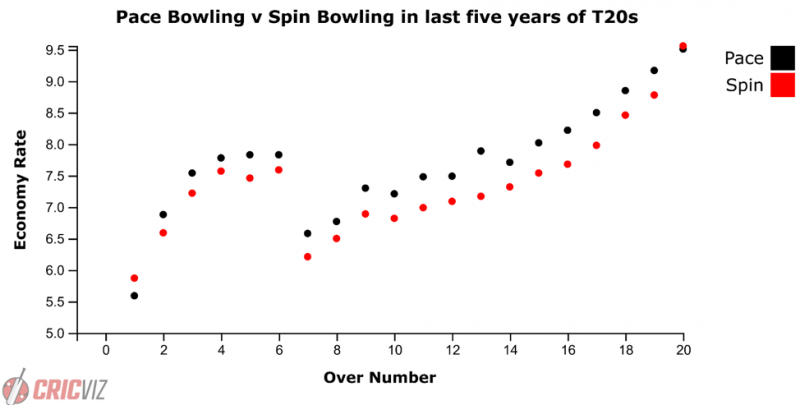 And to be quite honest, he rarely does. Moeen has batted lower than No.5 on 14 occasions for England. That is a finishing role, where he should be coming in, hitting hard, putting the cherry on the icing on the cake; in those 14 innings, he has scored at 6.84rpo, and been dismissed every 11 balls. Moeen has been a failure in this role.

This should not be a surprise.

The death overs are the time when you face less spin than any other, as shown above. Batting Moeen at No.7 is, in the most literal terms, setting him up to fail. Why would you willingly place a batsman who dominates spin in the phase of the game where he is least likely to face it? Batting Moeen in the middle order gets the best out of him, and covers the weaknesses of Stokes and Morgan against spin. He is so well suited to the middle overs, his strengths and weaknesses so obvious, that his absence from that phase suggests that England simply do not think he’s good enough. 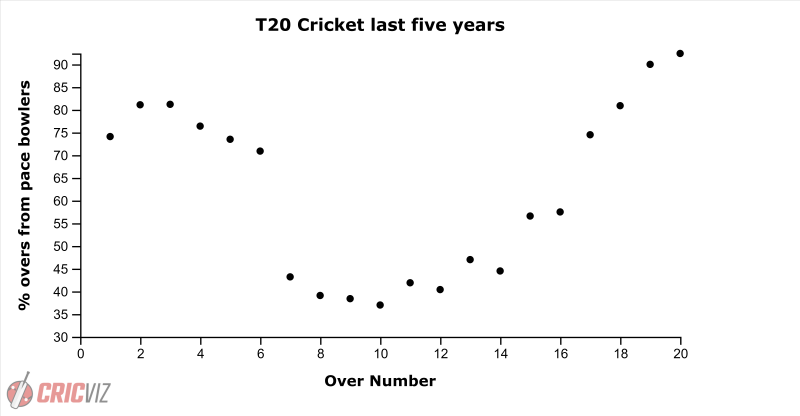 Cricket is often described as ‘an individual sport played in a team environment’. It has merit, as a simplistic view of the game. It gets to the heart of some ideas. Yet whilst cricketers may not be affected by their teammates actions quite as obviously as in other sports, there are other exterior forces acting on them. Ultimately, cricketers are at the mercy of their coaches, far more so than in other sport. In football, a player can roam from position, drive forward, and take control. In rugby, the structure is so loose that even the most didactic coach only has so much control. Elsewhere, the relationship is similarly loose. Yet in cricket, perhaps only in cricket, are players so tightly confined within the lanes the coaches have laid out. As a player, these are the men who write your story.

In a variety of ways, and a variety of formats, England have shown they don’t quite know how to treat Moeen. From the way he has been moved around the batting order in Test cricket, to the way he has been talked up as a lead spinner, then talked down as a second spinner. He has opened the batting in ODIs, then dropped down the No.7. However, he is more valuable in T20 than in any other format; England can’t afford to do it again.