In the third ODI between South Africa and England, Rassie van der Dussen was reprieved by a DRS review, despite his side having seemingly lost their one chance to go upstairs on the previous ball of the innings.

On the third ball of the 21st over of South Africa’s innings, bowled by Adil Rashid, Temba Bavuma was struck on the pad and given lbw. The diminutive batsman chose to review, but the decision was upheld, and South Africa’s referral seemingly lost, when Hawk Eye showed the ball hitting the pad in line and hitting the stumps full on.

However, there was confusion initially when Bavuma was asked to stop near the boundary edge as TV umpire Aleem Dar checked for an inside edge. With none apparent, Bavuma was, for the third time, sent on his way.

The very next delivery, Rashid won an lbw appeal against new batsman van der Dussen, and with South Africa apparently out of reviews, the right hander walked off. However, the umpires alerted him that South Africa still had a review, despite the events of the previous delivery, and van der Dussen chose to go upstairs. 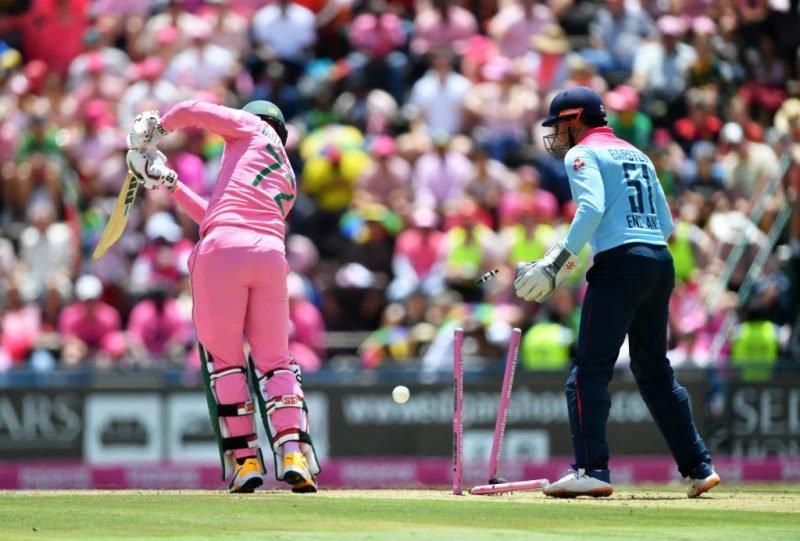 After an animated discussion with England captain Eoin Morgan, the decision was sent to Dar, and, with Hawk Eye revealing the ball would have missed leg stump, van der Dussen was reprieved, much to England’s chagrin.

Incredible. Van der Dussen is given out lbw first ball, but is then allowed to review the decision despite Bavuma having used South Africa’s for his wicket.

It was quickly relayed that the reason why South Africa were allowed to retain their review was because Ultra Edge had malfunctioned during Bavuma’s DRS review, and so it was adjudged ‘umpires’ call’.

In a way, after a confluence of mistakes, the correct decision was reached in the end. In any case, in the next over, bowled by Moeen Ali, van der Dussen was clean bowled, and there was no reviewing that.