England fast bowler Jofra Archer, who reported having  heard racial insults from a member of the crowd during  the first Test between New Zealand and England at Bay Oval, wants to put the disturbing incident behind him.

The New Zealand and England cricket boards are still investigating the incident and have promised swift action against the perpetrator. Home team captain Kane Williamson joined his board in apologising to Archer.

The pacer, who first tweeted about what happened, said that while he is upset about the incident, he has “moved on” from it.

We are shocked and disappointed to hear of the verbal abuse @JofraArcher received after the Test today. @englandcricket might be our rivals but they're also our friends and racist abuse is never okay!

“The first thing I want to say about what happened towards the end of the Test at Mount Maunganui is that I’m over it,” he wrote in a column for the Daily Mail.

“I’ve left what happened at the ground and I’ve moved on. I should also say it was just one person who was shouting stuff. But I found the incident a real shame.”

Archer, who made his Test debut in the Ashes this year, understands that while sledging and banter from opposing fans is a part of playing cricket, racism has no excus.

"There is no time or place for it in any walk of life, let alone cricket"

“If someone wants to shout at me and tell me I’m bowling badly, that’s fine. I may not agree but it’s fine. It’s part of the experience of being a touring cricketer,” he said.

“To hear racism, though, that’s another matter. There is no time or place for it in any walk of life, let alone cricket. It’s just not called for.”

Related Story: Cricket owes a debt to Mohammed Siraj’s courage & now it must follow his lead

On Wednesday, November 27, three days after the incident, a New Zealand newspaper published a report saying that two spectators have come forward with the claim that the man responsible for yelling racial slurs at Archer was, in fact, an English supporter. 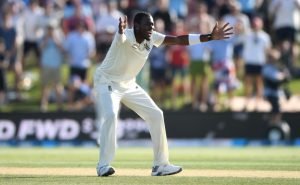 “He was yelling stuff out and I didn’t know what it meant. He was using abbreviations which my children then told me later of what he was actually meaning, and if I had known, I would have told him to shut up,” added the other witness. “He was very vocal … he had an English accent and he was giving it to Jofra.

“So let’s hope that they can find the guy and ban him from any game of cricket in New Zealand ever again.”

England, who lost the first Test by an innings and 65 runs, will play the second Test in Hamilton starting on Friday, November 29.