At first glance, the catch from Mitchell Santner to dismiss Jos Buttler after lunch on the second day of England’s first Test against New Zealand was entirely unremarkable.

Aiming to extract as many runs as possible in the company of the tail, Buttler attempted a big shot off Neil Wagner, upper-cutting the left-armer square on the off-side, only to pick out Mitchell Santner at deep point.

However, as replays were shown Santner was revealed to have been outside the playing area as Wagner started his run-up, having stepped over the boundary rope and the hoardings into the crowd to sign autographs. Even as Wagner bowled the ball, he was still outside of the field of play. He sprinted to re-enter as Buttler struck his shot before steadying himself to claim the catch.

While Buttler didn’t protest the dismissal, there were suggestions that he might not have realised there was a fielder stationed in the deep point region, since, when Wagner was running into bowl, there wasn’t. There are a number of areas of both the ICC’s playing conditions and even their anti-corruption code that could be at play.

Buttler falls for 43 as his 52 run partnership with Leach comes to an end. pic.twitter.com/dzcJImp3f8

Initial focus fell on Section 28.6, which concerns “Movement by any fielder other than the wicket-keeper.” Clause 28.6.1 states that “Any movement by any fielder… after the ball comes into play and before the ball reaches the striker, is unfair except for the following: movement by any fielder, other than a close fielder, towards the striker or the striker’s wicket that does not significantly alter the position of the fielder.” It is debateable if Santner was in contravention of this. While the clause is designed so that the traditional practice of ‘walking in’ is not outlawed, Santner’s leap and sprint might at the very least be at the upper end of what is considered as usual walking in.

More pertinent, however, is Section 24.2, which relates to a “Fielder…leaving the field of play”. Clause 24.2.2 states that “If a fielder…leaves the field during play, an umpire shall be informed of the reason for this absence. He shall not thereafter come on to the field of play during a session of play without the consent of the umpire.” With Santner having returned while Wagner was running in, it would appear Santner re-entered without consent.

Section 24.4 concerns a “Player returning without permission”. “If a player comes on to the field of play in contravention of clause 24.2.2 and comes into contact with the ball while it is in play, the ball shall immediately become dead,” the playing conditions state. “The umpire shall award 5 Penalty runs to the batting side.” 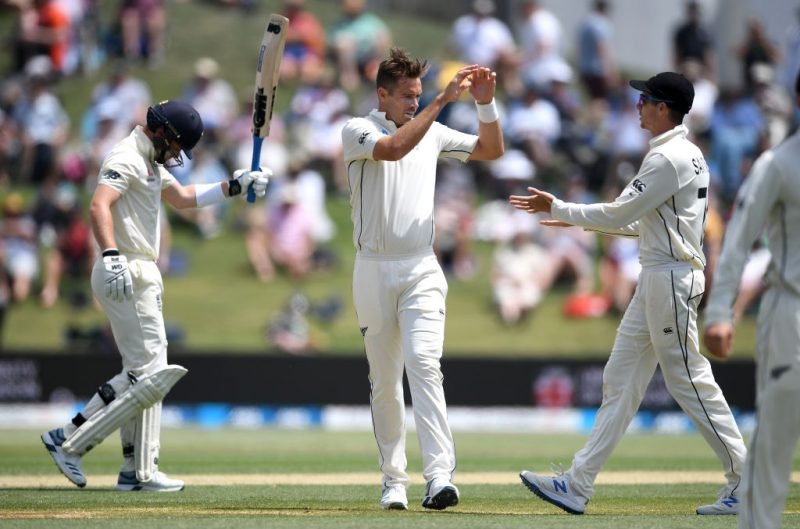 There is also an argument that Santner was in contravention of the ICC’s Anti-Corruption Code, again for leaving the field of play without the umpires’ permission. Article 5 of the ICC’s minimum standards for players’ and match officials’ areas (PMOA) at international matches concerns “leaving the PMOA”, and states that “should any Player…need to leave for any… matter that is not related to the performance of his duties in the international match in question”, they must obtain express permission from the ICC’s anti-corruption manager or their team manager, only communicate with those they have permission to communicate with, and carry their PMOA accreditation pass, which Santner would appear not to have done.

Any action might seem heavy-handed, but would also hardly be out of step with recent precedent, after Hobart Hurricanes player Emily Smith was banned for the remainder of Australia’s domestic season by CA for posting a video in which a team sheet was visible on her private Instagram account before a washed-out game.

Leaving the field to sign autographs might seem harmless enough, and it could be seen as a loss if players were to be discouraged from crowd interaction. There is no suggestion whatsoever that Santner was engaging in corrupt activity, and from footage didn’t seem to touch anything other than mini bats and marker pens but it’s also not hard to conceive of a situation where a player might hop over a boundary hoarding and look at an unrestricted communication device while signing autographs, or receive communication from someone engaged in corruption while doing so.

If Santner’s intent was innocent enough, praiseworthy even, his actions might have revealed a stark truth, far beyond simply accounting for Buttler’s wicket.