CricViz analyst Patrick Noone examines the challenges Mitchell Santner faced during his stubborn knock of 126 and the importance of the the New Zealand all-rounder’s effort.

If day three was a case of England being ground down by New Zealand, day four was little more than the remains of the tourists’ faint hopes of salvaging a win in this Test match being disdainfully cast aside by the ruthless Black Caps. Every team is allowed a bad day in Test cricket; even the very best sides endure hours in the field where a combination of bad luck, below-par performances and poorly laid plans contrive to see themselves lose whatever initiative they might have had.

Bad days can be written off with the usual platitudes: take the positives, put it to the back of our minds, let’s go again tomorrow etc. However, when one bad day turns into two, there are few things more dispiriting for a fielding team. How often have we seen a partnership hold firm until stumps, only to be broken within the first few overs on the following day? For England, there was no such respite as BJ Watling and Mitchell Santner batted the best part of two sessions as this gruelling juggernaut of a Test match trudged along with an unwieldy grimness.

It was not the first instance in recent times that England have made heavy weather of dismissing the opposition’s lower order in Test cricket. Since the start of 2018, no team to have played five or more matches has a higher bowling average against batsmen from number eight onwards. The likes of Tim Southee, Mitchell Starc and Ravindra Jadeja have all recorded half-centuries against Joe Root’s side in that time, while Jason Holder took tail wagging to new extremes with his 202* in Bridgetown back in January. 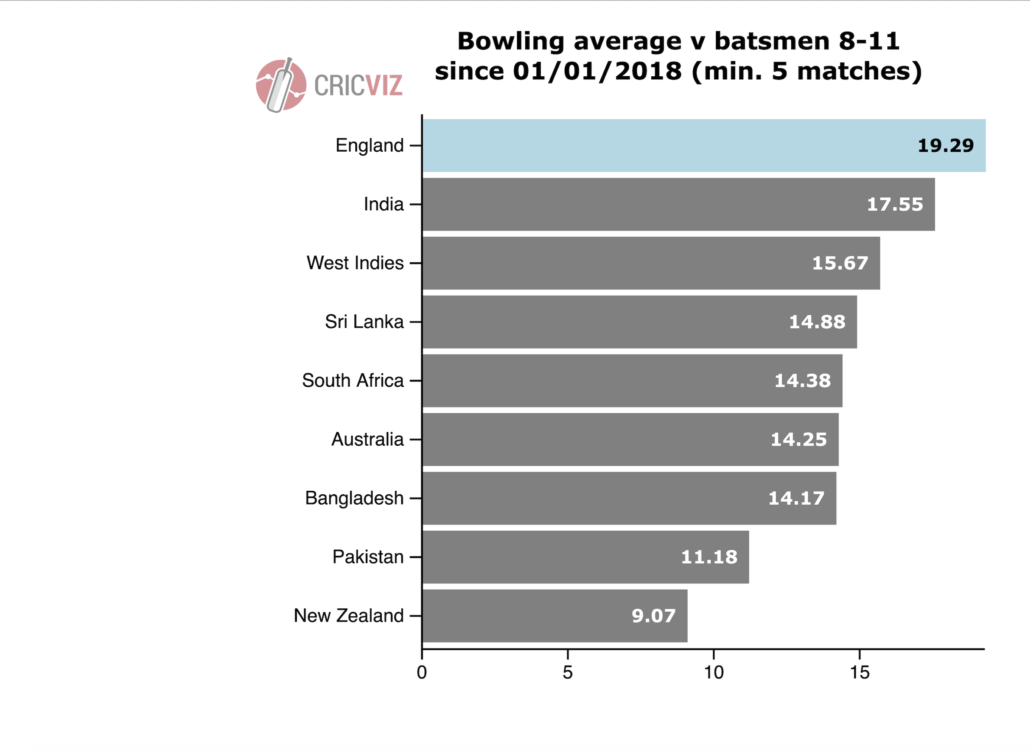 Santner didn’t quite reach those heights in terms of the volume of runs he scored, but his maiden Test century was an innings that represented a coming of age for him as a batsman. Across the 269 balls he faced, Santner faced a variety of challenges from England’s tiring attack. He was equal to just about all of them to the point that, by the end of innings, he was dictating terms and striking the ball around Bay Oval at will.

When Santner arrived at the crease at the start of the evening session on day three, England’s seam bowlers peppered him with short-pitched bowling. 91% of the balls the quicks bowled to Santner in that session were short. He looked uncomfortable at times and he was only able to score off four of the bouncers he faced but, as Mark Richardson said on commentary, it’s okay to look uncomfortable against the short ball, as long as you don’t get out to it.

And Santner survived, forcing England to recalibrate their plans to him this morning. Only 32% of the balls he faced in the first session today were short, and that allowed him to settle into his innings and play the ideal support role to Watling as New Zealand continued their steady accumulation of runs. 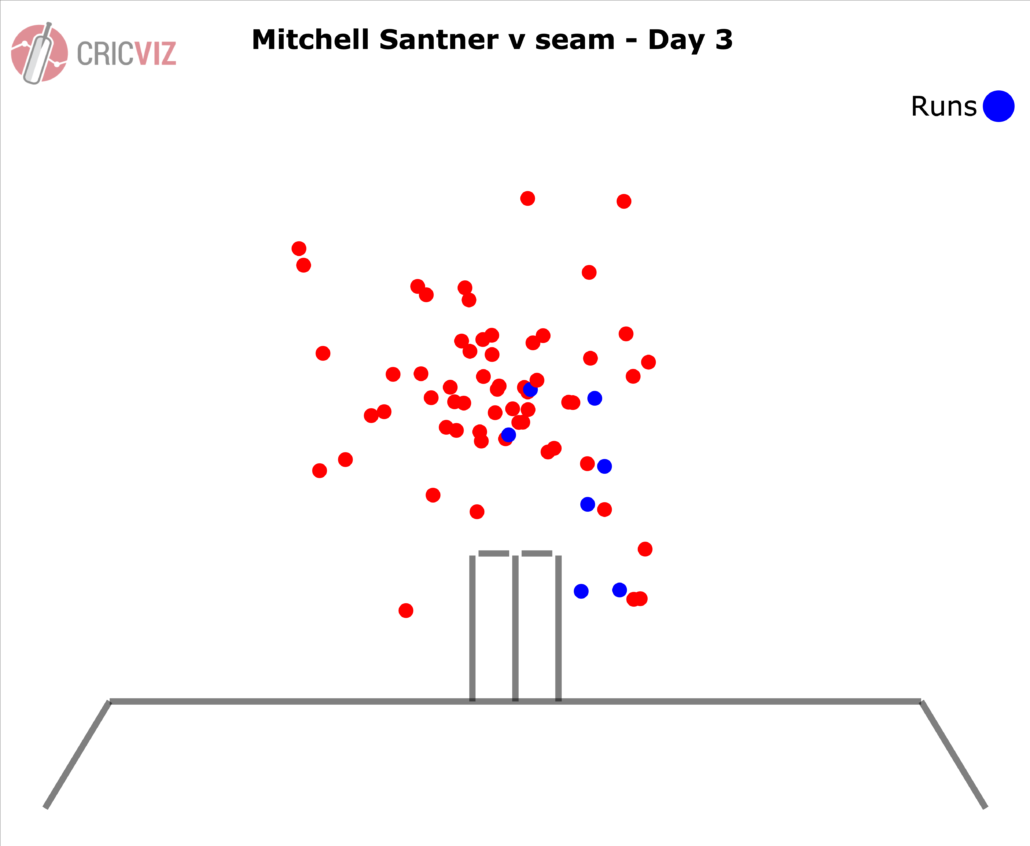 Santner showed much greater intent this morning, upping his attacking shot percentage from 12% on day three to 24% in the first session of day four. Though he continued to score slowly, it was clear that he was becoming more comfortable at the crease, laying the platform for him to accelerate after lunch.

Buoyed by the freedom that New Zealand’s ever-increasing lead provided him, Santner cut loose in the afternoon session, attacking over half the balls he faced and hitting seven sweetly struck fours and four towering sixes between mid-off and midwicket. Three of those fours came off a single Stuart Broad over, taking Santner from 57 to 69 in the space of five balls – his previous 13 runs had come from 47 deliveries.

Santner then added the 31 runs he needed to reach three figures in just 36 balls; the holding pattern that the game had fallen into during the earlier part of the day was a distant memory. While Santner and Watling were merely working the ball around, England seemed happy enough that they weren’t being hurt by New Zealand. Santner’s acceleration changed all of that, taking the game even further away from England and looking every inch the genuine Test all-rounder.

Santner would ultimately fall for 126, attempting one big shot too many and holing out to long on. His partnership with Watling had lasted exactly 500 balls, yielded 261 runs and succeeded in batting England entirely out of the game. When the previous wicket of Colin de Grandhomme fell immediately after the tea break on Day 3, England still had an outside chance of claiming a first-innings lead. By the time Santner was dismissed, New Zealand were 224 runs ahead.

Mitchell Santner's contribution with the ball in the final session was arguably more important than the maiden Test hundred he scored earlier in the day.https://t.co/qUcHIABiDz

It was an important innings for Santner who, despite having established himself as a key part of New Zealand’s white ball setup, has been in and out of the Test team. Seamers have dominated for the Black Caps in home Tests in the last two years, picking up 101 consecutive wickets before Santner himself emphatically broke the sequence himself by dismissing Dom Sibley, Rory Burns and Jack Leach in the last half hour of play. With the role of the spinner therefore something of a bit-part player, it has been Santner’s batting potential that has set him apart from the other contenders for the position, namely Todd Astle, Ish Sodhi and Ajaz Patel.

But being picked on potential is one thing, delivering on it is quite another. Today was the day when Santner arrived as a batting force in the longest form of the game, showing patience, skill and clinical aggression to cement his side’s commanding position in this match.