India’s 10-wicket win in the third Test against England in Ahmedabad has seen them return to the top of the ICC World Test Championship standings.

The hosts, who had risen to No.2 after their win in the second Test, have now overtaken New Zealand to reach the apex of the updated standings. India had a ‘Points won per poins contested’ percentage of 69.7 after the second Test. Now, with 490 points in out of a total 690, it has increased to 71 per cent.

England had jumped to the top spot after the first game, but had plummeted to No.4 after the second Test. While they remain in the same spot now, their PTC has dropped from 67 to 64.1. They are now out of the race for the ICC World Test Championship final.

India and Australia are still in the race for the second spot in the WTC final at Lord’s later this year, with New Zealand having already qualified. 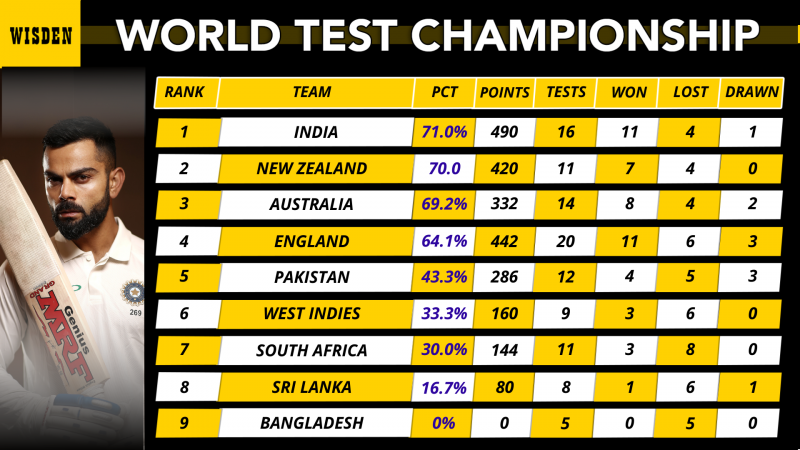 How Australia can still make the WTC final

New Zealand have already qualified for the final of the WTC. Here’s how the other finalist for the tournament will be determined:

The Black Caps qualified for the final of the competition after Australia opted out of their tour to South Africa last month.

This is the first edition of the ICC World Test Championship. The standings were initially determined by the number of points won by the teams. However, with COVID-19 disrupting the cricket calendar, the ICC shifted to percentage-based standings last year.

Each series has 120 points, with the points per game determined by the number of matches in the series. India and England have played the most number of games in the competition and are the only teams to have wins in double figures.