Having begun India’s ODI series against Australia as a makeshift wicketkeeper, KL Rahul might have just made the big gloves his for the time being by the end of it, at the expense of Rishabh Pant.

Going into the away series against New Zealand on a winning note, captain Virat Kohli is loath to tinker with a successful combination, much of which is down to Rahul’s flexibility with bat and behind the stumps.

Rahul stepped in behind the stumps during the first ODI in Mumbai, after Pant suffered from concussion in India’s batting innings. Having performed credibly, he was asked to continue in the role for the second ODI while Pant recovered, and he did better in Rajkot, pulling off an excellent stumping of Aaron Finch. It was enough for him to retain the spot even when Pant was fit for the third ODI in Bengaluru. With India sealing a 2-1 series win, captain Kohli is inclined to let him remain as wicketkeeper for now.

According to the skipper, having Rahul as keeper allows him to play an extra batsman, especially at a time when Pant hasn’t been able to live up to his promise with the bat and a top-heavy India have struggled to settle on their line-up.

“Rahul really brings a good balance to the team,” Kohli said after India wrapped up the series. “He has done well [as keeper] so we will have to persist with that a little bit and see where that takes us and not necessarily be confused about the other options we have.

“I think lack of clarity in of positions has really hurt us in the past. Now that we understand that this feels right, we will go ahead with that for a while and figure out if this is the right thing to do or not. You cannot chip and change immediately and create confusion …  Don’t see any reason why we should change this balance.” 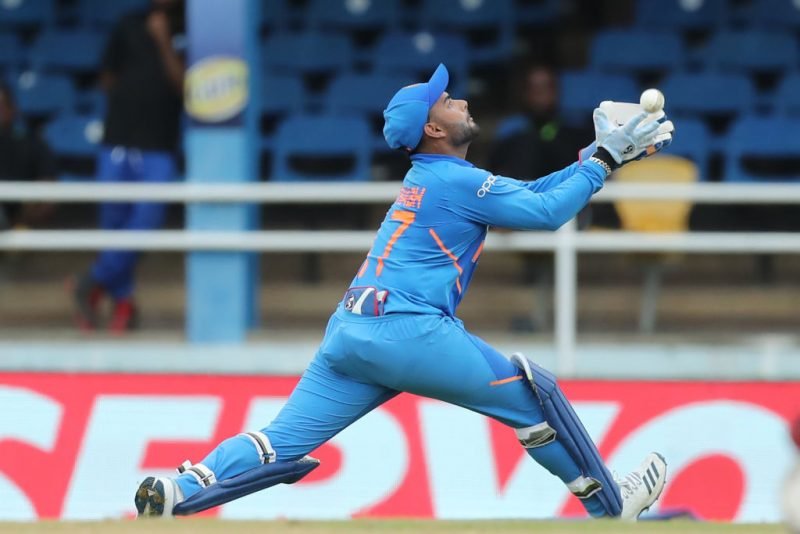 Rishabh Pant has not been consistent with the bat

Rahul has been in excellent form in the past few months, as a batsman. Against Australia, he was among the runs coming in at No.3 and No.5 in the first two matches, before opening in place of an injured Dhawan in the final ODI. In the second game in Rajkot, his 80 off 52 balls was a match-winning knock. And this while keeping for almost 50 overs. Kohli compared the youngster’s new role to that of his namesake Rahul Dravid in the early 2000s.

“It definitely allows us to play an extra batsmen which strengthens our batting order massively,” the skipper said. “If you look at the 2003 World Cup when Rahul bhai started keeping, the balance became different because you could play an extra batter … and guys at the top could really play positive cricket.

Related Story: What changes should India make to their line-up for the Boxing Day Test? Wisden writers have their say

“[Rahul] is very open to playing anywhere because he is a proper batsman and can play good cricket shots … He has reflected on what he needs to do in the last five six months and he has come a long way. He’s batting beautifully and that gives a boost to the team because he keeps as well.”

India leave to New Zealand on January 20 for a tour starting with five T20Is on January 24. Pant and Rahul are the two wicketkeeping options, with Sanju Samson dropped.

It’s an unexpected turn that a series that began with a debate about KL Rahul v Shikhar Dhawan in the XI has quickly become about KL Rahul v Rishabh Pant. It appears that the biggest hurdle for Pant in keeping his place in the XI may not be a potential return of MS Dhoni, but the red-hot form of Rahul.

For India, the forced change turned out to be a happy accident, and it is something they should stick with for the short term.

It will be a risky move. Despite his exciting potential and strong numbers, Rahul is still not always a sure selection in the XI (although in the past month he’s made dropping him an absurd choice) and proving himself as a keeper for 50 overs could add to the pressure. Consistency has been a challenge for him through his career, and working on some skills and some formats has meant he has a tendency to slip up elsewhere. A desire to improve as a wicketkeeper shouldn’t compromise his batting: India will miss the skills of Rahul the batsman more than they would Rahul the keeper.

But, having said that, it brings to the side a kind of versatility that could change matches. The extra spot it opens allows them to bring in another all-rounder when Hardik Pandya is fit, and strengthens both the batting and bowling.

This, though, cannot be a long-term move. Even Rahul Dravid needed to give up the gloves at some point to focus on his batting. As for Pant, if he is lost as a talent, especially in LOIs, it would be one of the more tragic tales of Indian cricket.