India’s top three performed superbly in the second ODI against Australia, batting 210 balls between them to score 216 runs, but it was KL Rahul’s middle-order heroics that stood out most. With his blistering 80 from No.5, he might have given Virat Kohli the answer to India’s long-running middle-order conundrum.

The debate surrounding India’s unsettled batting order had further escalated after Kohli’s surprise call to push himself down to No.4 in the series-opener in Mumbai. While that was addressed in Rajkot, with the skipper returning to the slot that he owns and responding with a fine 78, it was KL Rahul who stole the show with his blistering 80 in India’s first innings effort of 340-6. Through his performance, Rahul showed that be could be a solid middle-order batsman, one on whom they could count on in any situation.

On Friday, he looked a class apart, unleashing stroke after stroke against Australia’s best, Pat Cummins and Mitchell Starc, at monotonous ease. His 52-ball stay featured six fours and three sixes. He also became the fourth-fastest Indian to 1,000 runs in the format.

"Each day I've been thrown a different role or responsibility and I'm enjoying it for now.

The 27-year-old seems to have enjoyed the challenges he’s been thrown. And with his solid glovework later in the evening, he showed that he could be considered as a serious long-term wicketkeeping option as well.

“Each day, I’ve been thrown a different role or responsibility, and I’m enjoying it for now,” Rahul said. Obviously, it [No.5] is a different position. Once I got a couple balls out of the middle of the bat, then it just becomes about bat and ball. All the other things in your mind fade away. Very happy with the way I got a few partnerships.

“The past couple of months, I had to keep for Karnataka as well, so hopefully, I’ll keep the bowlers happy.”

The 300 is up for India in the 46th over. KL Rahul has raised a fifty and has played some exquisite strokes.#INDvAUShttps://t.co/M5ZI68K17T pic.twitter.com/Ywr10IgLcu

The past year has been a topsy-turvy one for Rahul. He was suspended from India’s tour of New Zealand, having made inappropriate comments in a television talk show, and the woeful run in the Tests during the Australia tour that preceded raised serious questions over his selection. But his remarkable talent as a batsman, the strong determination, and perhaps his captain’s faith, ensured a World Cup spot. Since then, he’s belonged to pretty much every batting position he’s been thrown into. After beginning as a No.4 in the initial stages of the World Cup, Rahul was pushed to the opening slot after Dhawan was ruled out of the competition with a thumb injury.

He responded with 178 runs from four innings, including a hundred against Sri Lanka, and has carried that form since. To date, he’s aggregated 789 runs at 52.60 as an opener in the format. While his numbers at two-down don’t quite give an impressive reading, the two hundreds in the shortest format from that position further justify his worth in the middle order.

Kane Richardson unleashes some powerful strokes in the final overs but it’s too little too late for Australia. India complete a comprehensive 36-run win to draw level in the series.

It’s all set up beautifully for the decider in Bengaluru.#INDvAUS pic.twitter.com/EJxIqTsgvK

When Rahul began his ODI career with an unbeaten 100 on debut against Zimbabwe in 2016, Shikhar Dhawan and Rohit Sharma had already formed a formidable pair at the top. Now, Rahul has begun 2020 as a serious threat to Dhawan in the XI. While the left-hander has once again peaked during the Australia series, that hasn’t affected Rahul success, because the Karnataka batsman, like he’s been doing in the last year or so, showed that he could bat well at any position.

India have had the challenge of slotting in multiple specialist openers to their XI in the past. Inevitably, one of them was pushed to the middle order. During the early 2000s, Sourav Ganguly, despite forming the most formidable opening partnership in ODI history with Sachin Tendulkar, pushed himself down to No.3 after Virender Sehwag blossomed as an opener. The move paid rich dividends, most remarkably during India’s dominant run to the final of the 2003 World Cup. The MS Dhoni era saw Gautam Gambhir, Sehwag’s opening partner at the first-class level, being pushed to one-down, rounding off one of the most formidable top-order units of that time. 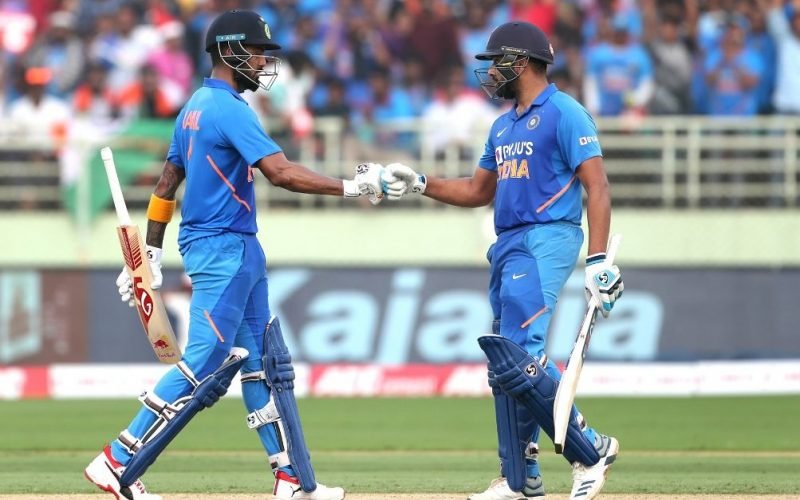 KL Rahul aced the opener’s role in Dhawan’s absence, aggregating 923 runs at an average of 92.3 across ten innings

What worked in India’s favour was the fact that Tendulkar, their best batsman then, batted at his most preferred position and had the luxury of controlling the innings from the start. There were moments when that successful formula was tinkered with, only to fail miserably, as was the case at the 2007 World Cup in the Caribbean.

And therefore, when Kohli, Tendulkar’s successor in every sense, walked in to bat as late as in the 28th over in the series-opener in Mumbai, it diminished his opportunity to control the flow. While the move presumably stemmed from the worrying lack of depth and experience lower down, Rahul’s “maturity”, as the skipper pointed out after the game, might just have given Kohli a genuine long-term solution.

"This is probably the best he's played at international level. That knocked showed maturity and class."

“It’s very important to figure out the best team you can put on the park, and when you see how KL was batting today, it’s very difficult to leave someone like that out,” Kohli said after the game. “Batting at No.5 and batting like that for the team, this is probably the best he’s played at the international level. That knocked showed maturity and class.

“Back to No. 3 was good for the team, so I’m happy from that point of view that it helped the team. In ODI cricket, Shikhar has been one of our most consistent performers. I’m very happy that he scored runs as well. It always augurs well when he and Rohit score runs.”

Rahul’s flexibility and reliability are a throwback to a certain other Rahul from Karnataka, who too, apart from donning the wicketkeeping gloves to lend balance to his team, batted at pretty much every position from 1 to 7 during his 16-year long career. Whether KL Rahul can match that sort of consistency over that long a period remains to be seen. For the moment, it is holding Indian cricket in good stead.