Top order batting is always a key factor in any Test series. Solid top orders protect the middle order from the most difficult period of the innings when the ball is hard and new and the bowlers are fresh. This is illustrated by the chart below which shows the Expected Average of batsmen by ten over blocks in the innings in Tests since 2015 based on ball tracking data. The chart shows how batting is at its hardest at the start of the innings and how as the ball gets older and the bowlers tire, Expected Averages rise. When the second new ball is taken, typically at the 80th over, Expected Averages fall once more before rising again. 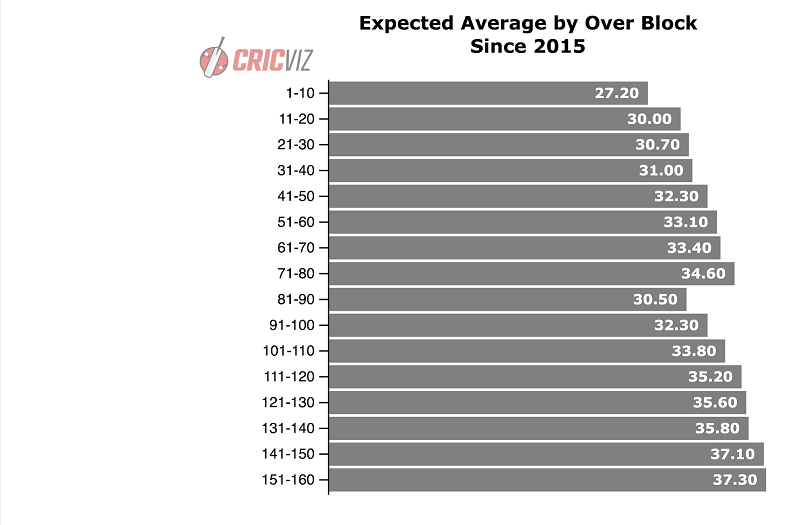 However, the importance of the top orders is likely to be even greater in the upcoming England-West Indies series due to a number of coalescing factors.

An area of weakness for both sides

The most significant reason for the importance of this battle is the fact that both England and West Indies currently have vulnerable top orders. Since the start of 2018 only one team’s top three have a lower average runs per wicket than the West Indies while England, although slightly better, rank eighth out of 12 teams. 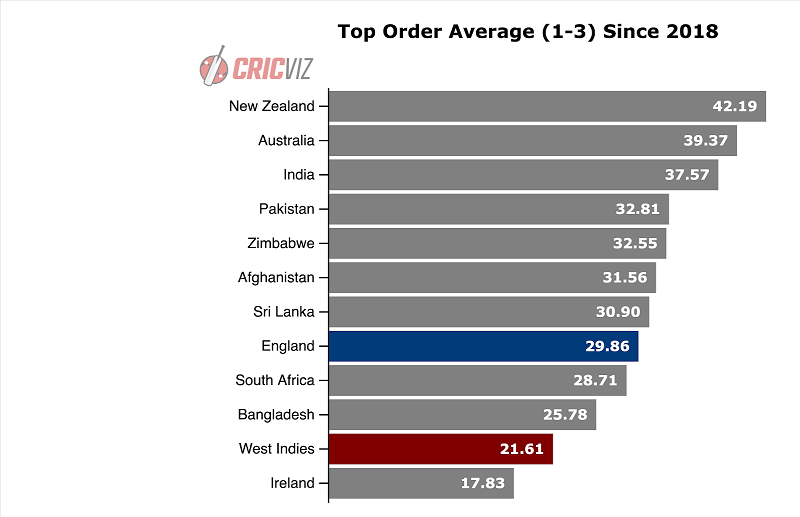 Inexperienced or out of form?

The primary reason for the struggles of both team’s top orders is that both teams have players who are out of form, inexperienced or, in some cases, both.

England’s top order has been unstable for some time now but for this series it is likely to be Rory Burns, Dom Sibley and one of Zak Crawley and Joe Denly at three with the other player at four in the absence of Joe Root for the first Test. These four players have just 39 Test caps between them and an aggregate batting average of 32.64 runs per wicket. 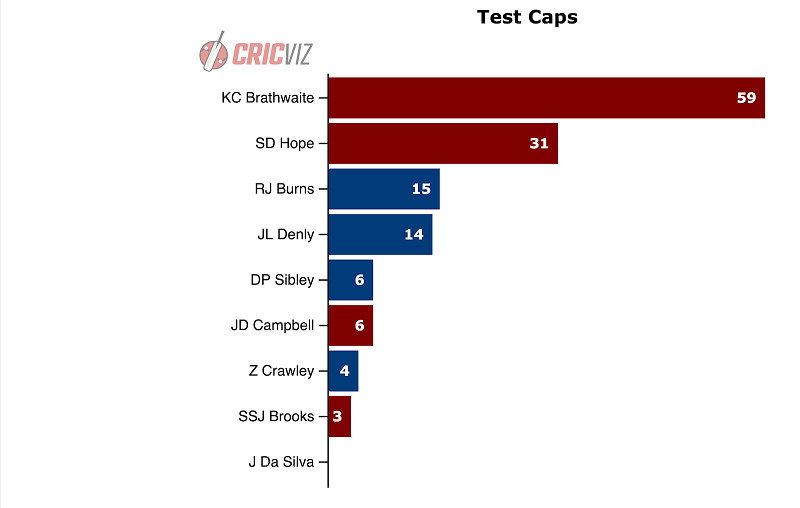 Meanwhile the West Indies top order is likely to comprise Kraigg Brathwaite and John Campbell as openers and Shai Hope at three and Shamarh Brooks at No.4, with Joshua Da Silva, not in the full squad but having put up a strong performance in West Indies’ final warm-up, also vying for selection at some point.

Unlike England’s potential top order both Brathwaite and Hope will bring considerable experience, having played in 59 and 31 Tests respectively. Of course the Bajan pair were the heroes of West Indies’ famous win at Headingley on the last tour but far from being a stepping stone to greater things that Test has preceded major drop-offs in form for both players with their averages falling to 25 and 26 since the start of 2018. The pair of Campbell and Brooks have just nine Tests between them while Da Silva is yet to make a Test appearance. 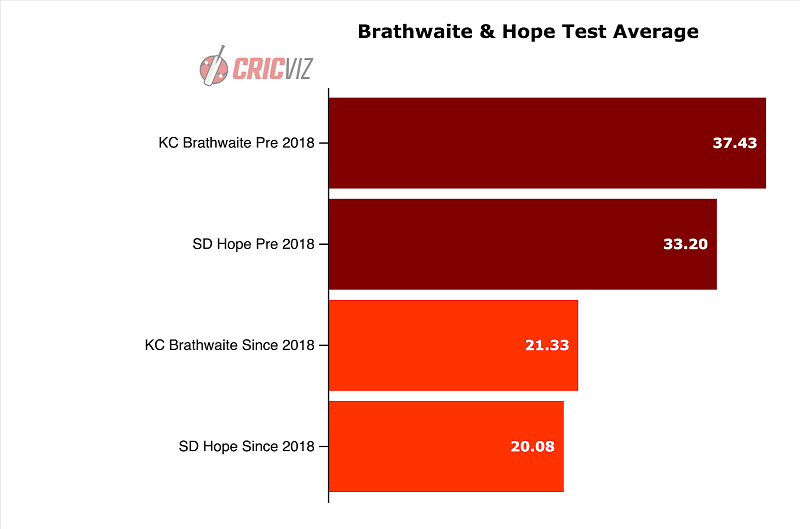 The importance of the top orders of both England and West Indies is heightened by the nature of their respective middle orders. Both teams have aggressive and dynamic players from four down into the lower order who like to score fluently and bat positively. This places additional emphasis on the two top orders to weather the new ball storm so as to give the engine rooms of their batting the best opportunity to succeed. The graphic below illustrates how aside from Campbell, the players in both top orders are generally steady scorers while those lower down are more positive. 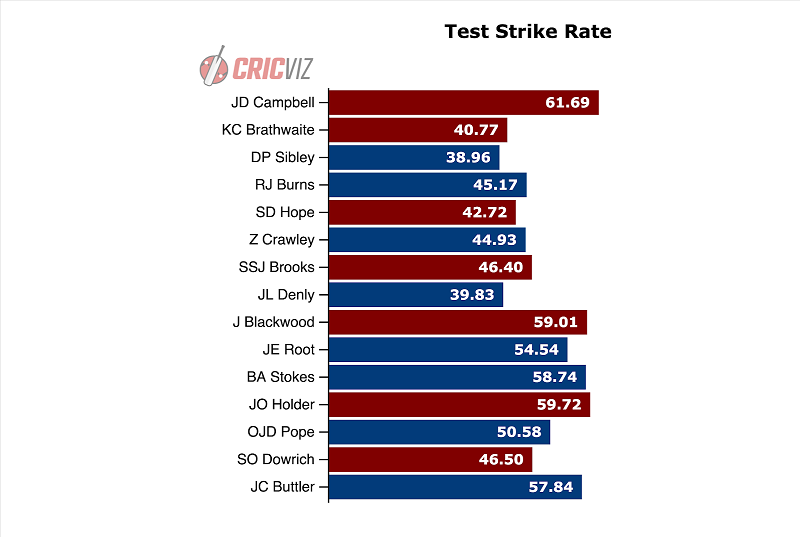 The significance of the two team’s top orders and their current vulnerabilities are further accentuated by the conditions they are likely to encounter in the series. Since the start of 2018 conditions in England have been exceptionally difficult for batsmen. The scatter graph below shows how the ball has seamed more in England and swung more than everywhere except West Indies since the start of 2018. 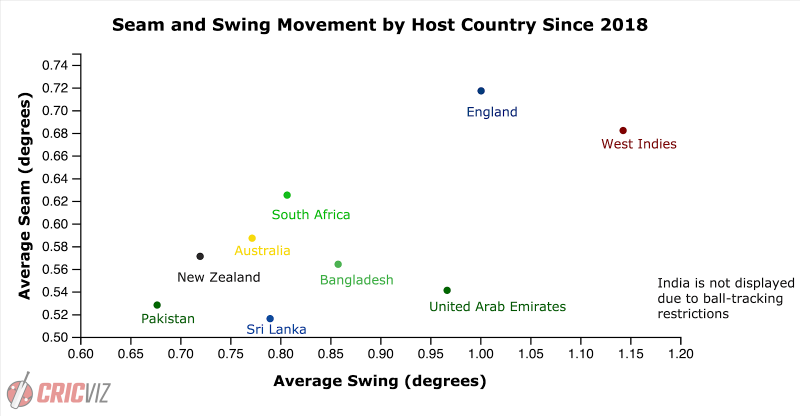 The difficulty posed by the conditions is also going to be perpetuated by the quality of the opposition bowling they are likely to face in the series. While both teams are desperate for top order batsmen they both currently have a surplus of superb pace bowlers. Both teams will be pitting weaknesses against opposition strengths.

England can call upon all-time greats James Anderson and Stuart Broad, two of the world’s fastest bowlers in Jofra Archer and Mark Wood and two masterful movers of the ball in Chris Woakes and Sam Curran. The West Indies meanwhile have a triumvirate of quicks at the peak of their powers: Kemar Roach, Shannon Gabriel and Jason Holder, while the tearaways Alzarri Joseph and Oshane Thomas offer x-factor and aggression.

These two superb sets of quick bowlers have over the last few years been operating in extremely favourable home conditions, as illustrated by the scatter graph above.

The coming together of good bowlers and helpful conditions has meant the two pace attacks have enjoyed spectacular returns in recent times. Since the start of 2018 only India have averaged less than the West Indies while England have also been excellent. 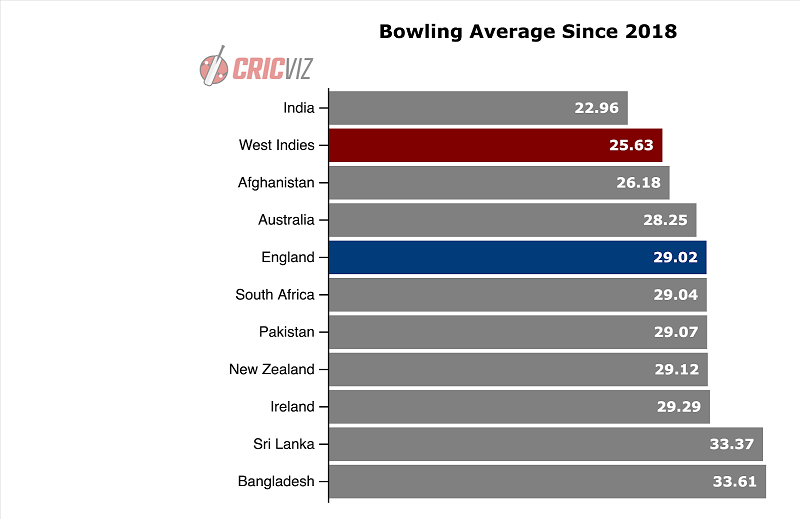 In evaluating how the two teams fare in this top order battle it is critical to retain perspective around their performances. The combination of extreme conditions and superb pace attacks means the top orders are unlikely to dominate the series and they must be judged accordingly. Perhaps the most important measure is not how many runs they can score but rather how long they can survive. The early phases of the innings are the most dangerous and the longer the engine room of the batting can be protected from this period; the better.