Stuart Broad, who suffers from asthma, was forced to call for an inhaler on the first day’s play of the second England-Pakistan Test after displaying discomfort during his opening spell.

The fast bowler first signalled for an inhaler during his fourth over, but continued his spell despite not receiving assistance until later. His first spell was accurate and economical, with his figures reading 5-2-7-0. He also almost dismissed Azhar Ali, who was dropped in the slips.

He could later be seen doubled over, but remained on the field after using his inhaler.

Until England’s pre-Ashes training camp in 2015, Broad kept the fact that he suffered from asthma hidden.

“One night we were asked to provide a piece of information about ourselves that no one else knew, with the notion of being open with each other,” Broad wrote in the Daily Mail. “I shocked the boys a little when I told them I only had one and a half lungs because I was born three months premature. 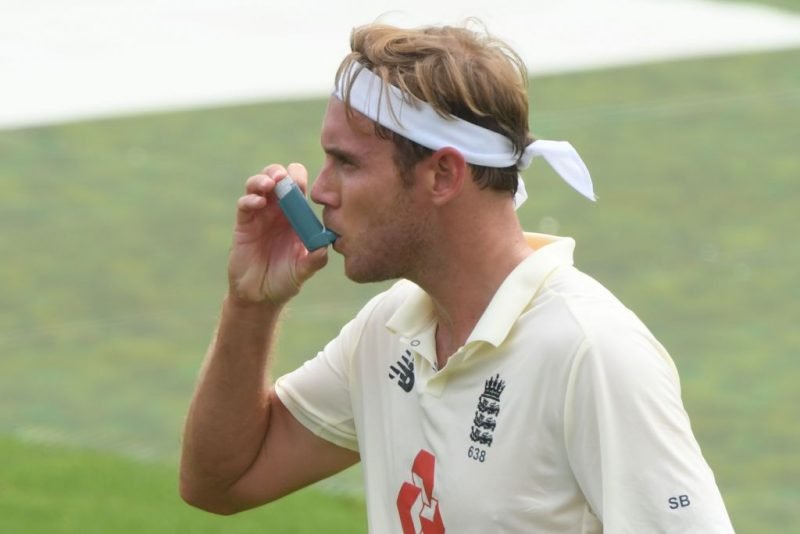 Stuart Broad, who suffers from asthma, using his inhaler

“I explained that because I was so tiny when I was born, basically at death’s door, one of my lungs never fully developed. That’s why I’m asthmatic and carry an inhaler. It has never affected me as a sportsman, but the idea that I’ve played my entire career with half a lung less than everybody else is quite amazing when you think about it.”

Despite suffering from asthma, Broad has an enviable fitness record. From 2012 until the first Test of the 2020 summer, he played every single one of England’s Tests at home. His longevity has enabled him to take 500 Test wickets, while Shane Warne has tipped him to go onto 700 scalps. That would leave him within touching distance of being Test cricket’s second most prolific bowler ever.

This article was brought to you in association with Wisden’s official betting partner, bet365 . For all the latest England vs Pakistan odds and in-play markets, visit bet365