Azhar Ali rarely looks rushed in anything he does, but, as he has found out in the past two weeks, life as a Test captain can come at you fast. On the fourth morning of the first Test, Pakistan were cruising towards victory, seemingly set on maintaining an impressive record in England. Barely four days’ play later, and his career is on the line.

The old ‘only Pakistan can lose it from here’ phrase did the rounds, with Azhar’s uninspiring record as captain – two wins and three losses from seven – and as a batsman – an average of 25.87 since the start of 2018 – coming under scrutiny.

The flak has flowed from a series of former Pakistan greats. Inzamam-ul-Haq had been displeased by the “lack of intent”, Shoaib Akhtar, in a typically florid YouTube rant, compared Pakistan to a club team, and even the normally even-handed Wasim Akram feared the worst: “Obviously, if we don’t win and he doesn’t perform then Pakistan Cricket Board have to look for someone else.”

With Pakistan hurtling towards their first series defeat in England since 2006, there was a growing sentiment that Azhar could face the fate of his predecessor Sarfaraz Ahmed. When he walked to the crease on the second evening of the final Test, there was only pride left to be salvaged, England having racked up 583 in their first innings. With Pakistan going to stumps three down, even that looked unlikely.

An excellent innings from the Pakistan skipper, one desperately needed by his team.

Yet among all the brouhaha, Azhar has remained dignified, seemingly waiting for his time and it is to his credit as a captain that team unity hasn’t unravelled even as they have struggled on the field. He revealed that they, in trying to bounce back from the disappointment, had been binging on the Turkish TV show Diriliş: Ertuğrul. On Sunday, Azhar was at the centre of his very own Diriliş – or resurrection – not of Pakistan’s hopes of saving the series or even the match, but of his own place certainly, and perhaps of something deeper, of the team’s perception back home. 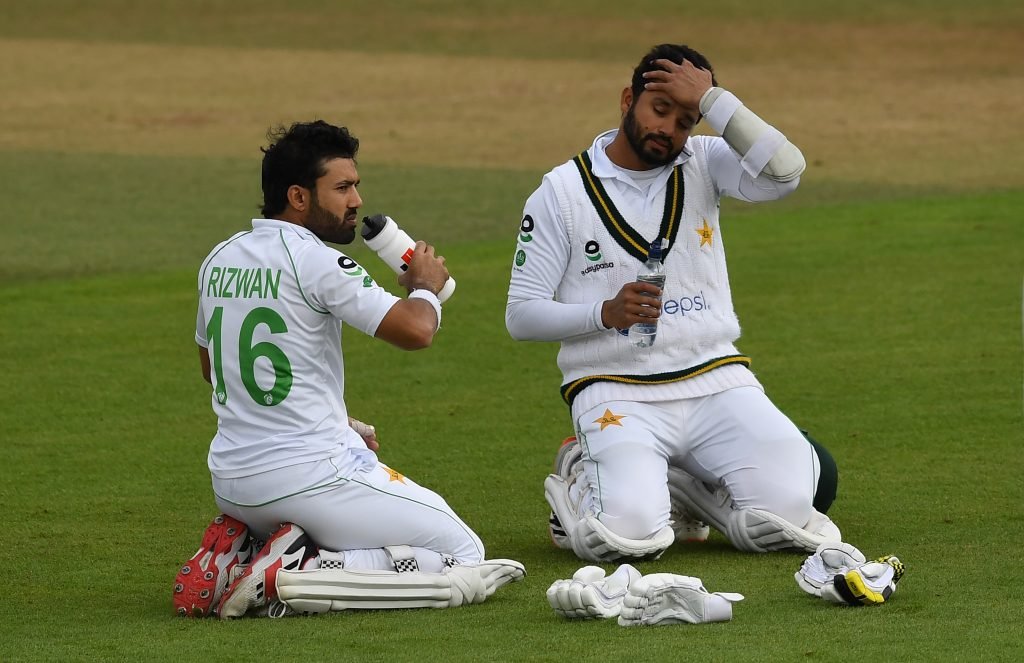 The Pakistan team have been binging on the Turkish TV show Diriliş: Ertuğrul

It was an innings of technical as well as temperamental renewal, revolving around a vital tweak, helping him fix an erratic stance that had his head fall over, making him vulnerable to the ball coming in. Having been dismissed leg-before in both innings of the Manchester Test, Azhar quietly adopted an open stance, ensuring that he was not plonking his front foot forward.

“His feet are in a much better position, he is getting his left foot out of the way,” said Nasser Hussain on commentary. “You can see he’s not planting his foot, he’s been able to get that foot out the way and access the ball. That’s just a small change, not an easy thing to do in the middle of the series.”

Asad Shafiq departed early on the third morning, but Azhar found company in the fidgety Fawad Alam, combining to weather the morning session, where the occasional burst of rain did little to help the batsmen maintain their concentration.

Azhar’s stance may have been more open, but he stayed true to his more cautious style, maintaining a compact posture, playing close to his body and flicking away anything that lay on the middle and leg stump, blunting the attack till the new ball softened. The English quicks decided to shift their channel outside off in an attempt to disturb his refurbished technique, but with little movement on offer, and Azhar’s patience plentiful, a Plan C was needed.

Jofra Archer began bending his back, consistently cranking up 90mph, even giving Mohammad Rizwan a thwack on the helmet with a sharp bouncer. Azhar was unfazed.

Old ball movement has been minimal in this Test. In overs 41-80 we've seen an average of 0.57 degrees swing; that's the least for any Test in England since data has been recorded, back in 2006. #ENGvPAK

When any width was presented, Azhar deftly rode the bounce, guiding deliveries over the slip cordon and past point to keep the battle going. Any whispers of the captain’s scratchy form were being diffused, stroke by stroke.

And slowly, the rest began to heal too. As the skipper piled on the runs, the previously critical Wasim, softened, confidently stating that “these are the best players we have on this tour.”

The cuts, drives, and flicks took him past 6,000 Test runs – and the Azhar Ali of old slowly resurfaced. A flashy drive in the 72nd over brought up his 17th Test century, he glanced at his bat twice in muted celebration, signifying that the willow had done the talking. “It is my responsibility to make sure that I score runs,” Azhar had said before the match.

The follow-on could not be avoided, but Azhar had done his part, ending the day with 141 runs and an asterisk next to his name. A glorious drive down the ground off Stuart Broad in the 90th over, of a delivery angling into his stumps, was the final certificate of the merits of his new technique. It was an alliance of Azhar’s familiar, old resolve, and his newfound technical modification. The battle trudges into another day, but Azhar’s resurrection, in its own way, was complete.