Beuran Hendricks has just been called up by South Africa as a World Cup replacement for the injured Dale Steyn, but who is he?

Beuran Hendricks has only played two ODIs before, but having made his T20I debut back in 2014, he’s not a complete stranger to the international arena.

The camp he will be joining is not in a good place after back-to-back defeats to hosts England and Bangladesh. The left-arm seamer will no doubt provide another useful option for captain Faf du Plessis after Steyn’s injury and Ngidi’s recent problems.

"It's huge, huge news."
@niallnobiobrien and @Elmakapelma react to the news that Dale Steyn has been ruled out of #CWC19 and that Beuran Hendricks has been called up as his replacement. pic.twitter.com/KpeSta7RF6

Hendricks will no doubt be eager to reverse his country’s fortunes and help them to a now unlikely semi-final place in this World Cup.

Twenty-eight years old and from Cape Town, Hendricks has been on the international radar for a good few years now, but was first called up to the South Africa A team in 2013 after a string of excellent performances for provincial side, Western Province. Taking his chance with both hands, he took 11 wickets in the match against an India A team, earning him an IPL contract to represent King’s XI Punjab for the 2014 edition.

With the red ball, he has an excellent record, taking 288 wickets in 83 matches at 23.54 apiece. However, it is in T20s that he has had most success, taking his wickets every 14.4 balls, an enviable strike rate, that will surely make him an enticing prospect for the Proteas.

The South African quick will want to once again grab his chance with both hands as he features in his first ICC Cricket World Cup.

Beuran Hendricks has only played two ODI matches before taking just a single wicket, having made his debut in this year’s series against Pakistan. A largely unproven talent possibly being brought straight into the team at this late stage could go one of two ways for the South Africans.

What he does have though, is some form behind him, taking the second-most number of wickets by a fast bowler in the latest CSA 4-Day Franchise Series helping his team, Cape Cobras, to second place. 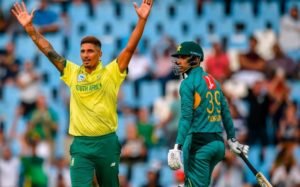 The obvious challenge for Hendricks is to help lift his side ahead of a tough match against India on Wednesday, June 5. After that, fans will no doubt want to see his renowned ability to bowl at pace – in the 140s kph – and swing the new ball as he attempts to cement his place in the South African team.

With South Africa’s clear strength being their fast bowling, Beuran Hendricks will face stiff competition in his attempts to not only to play in this World Cup, but also stay in the international picture.

“[Hendricks’] talent, especially when he can operate at full tilt, is hardly in doubt: he will add a nice measure of variety to the all-right-arm SA pace resources and is renowned for his ability to generate prodigious swing in the right conditions.” – Rob Houwing