Well, if that doesn’t get them in, nothing will. You hope, against hope, for a classic. You dream of a tight finish, even a last-over nipper, because you know people are peering in. You look at this game of yours, at this peculiar antsy diversion that you love so much, with all its history and millennial angst, and you wonder. You wonder what it might dare to deliver when it matters. When they’re watching, on this one-off day.

And then that happens. On that stage. This one’s for everybody who’s ever been slightly moved by the motion of a moving ball. A moment in time to reverberate through the unaware and the yet-to-know; to infiltrate the unacquainted and the blissfully baffled.

The greatest game of cricket ever played.

RESULT: England win the 2019 Cricket World Cup after an astonishing game at Lord’s. Stokes (84*) took the final to a Super Over and then Archer held his nerve at the death as a run-out from Jason Roy sealed the win.

This is New Zealand’s tale tonight: Nobody falls in love with cricket. They fall down with it. It’s the most beautiful, doomed affair you’ll ever have. It will let you down and bleed you dry. It will promise the world and whip it from you. And you’ll never, ever leave it be. Other sports can claim their fair share of obsessives but with cricket, it’s more like a compulsion. You know it will hurt you, and make you feel bad, but you can’t resist it. And nor would you want to. Not in the end. This is part of cricket’s truth.

England’s tale is all the rarer, and the more exquisite. They were awful, and then they were trailblazers, and now they’ve won four clutch games in a row to win the men’s World Cup for the first time since someone thought it was a good idea to have one.

As individuals, their lives have turned on a dime. Or on a deflection down to third man, the most infamous six in cricketing history. Collectively, they have done something potentially seismic and lasting. They knew, just as we did, that cricket isn’t like other sports. Now in the full glare of a captive audience, they’ve proved it.

578 runs at 82.57
Two hundreds
Two fifties
Highest score of 148
Captains his side to a World Cup Final

Adil Rashid? There is a story worth telling. Mark Wood, Liam Plunkett, our friends in the north? Sing them loud. Eoin Morgan, packing for London with a bat slung over his shoulder? These are stories about our stroppy little island that are actually worth telling. And how, more than ever, do we need to hear them now.

And so, all things considered, it had be Ben Stokes. He has the kind of magnetism that very few sportspeople possess. He is also, of course, the one most people had heard of.

With two overs left today he was resting on his bat, broadly wrecked. Stokes, who hadn’t timed much all innings on a sluggish pitch, had held the innings together as much by will as skill. It had overall been an innings marked by outstanding squeezing cricket by New Zealand and nervy, staccato English batsmanship. But he couldn’t let go.

With 22 needed from nine balls, and Archer (whose potency is completely inverted when he wears his pads) waddling out to join him, Stokes looked to the skies and inhaled another mouthful of thick London air. 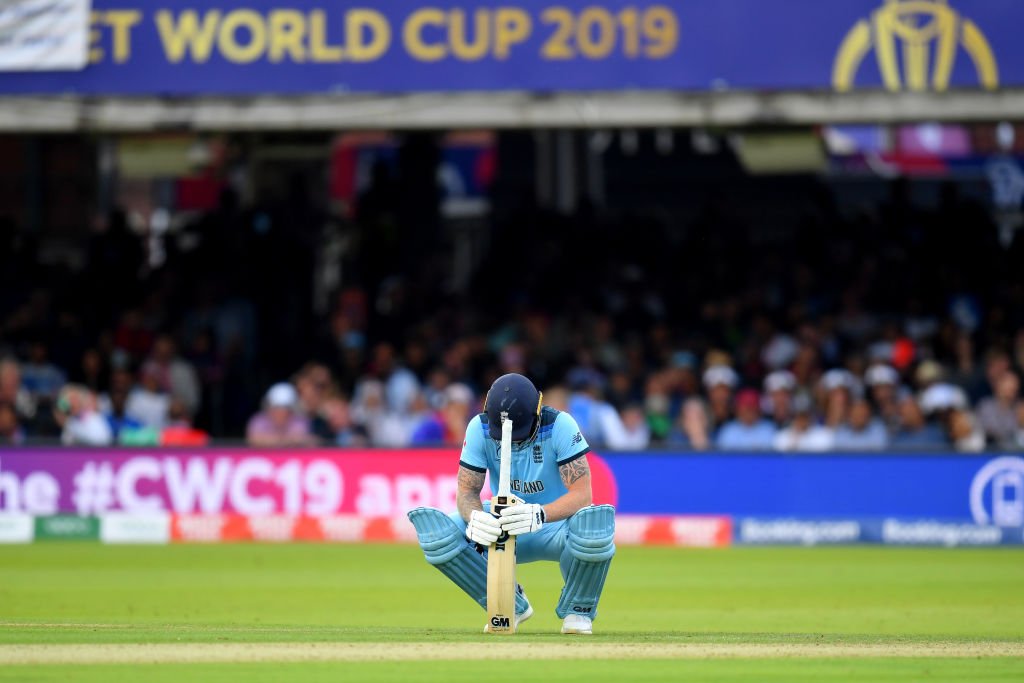 The next delivery is carved over cow corner, to the longest part of the ground. Trent Boult, a brilliant boundary rider, is underneath it. Boult takes the catch clean but Stokes has raised his arms before the umpire can himself confirm that the fielder has stood on the rope. England still need another. More to the point, with 15 needed from the last, they could do with a couple.

Two balls, two dots. Fifteen now from four. To the next, he gets under a full-length bullet from Boult and almost buckles his front leg to clear the road for a slap over mid-wicket. It’s a classic Stokes shot, and a classic Stokes moment. But straightforward cricketing brilliance is never the full story. There’s always a strain of unwitting anarchy thrown in. It pays to expect the unexpected.

And so the second ‘six’ of the over, while ludicrous, is just as Stokesian as the first. The deflection to third man off the edge of his bat, turning a hard-run two into cricket’s weirdest ever maximum, could only happen to Ben Stokes. He’s incapable of an ordinary moment. Twelve taken from two balls but only one shot airborne. 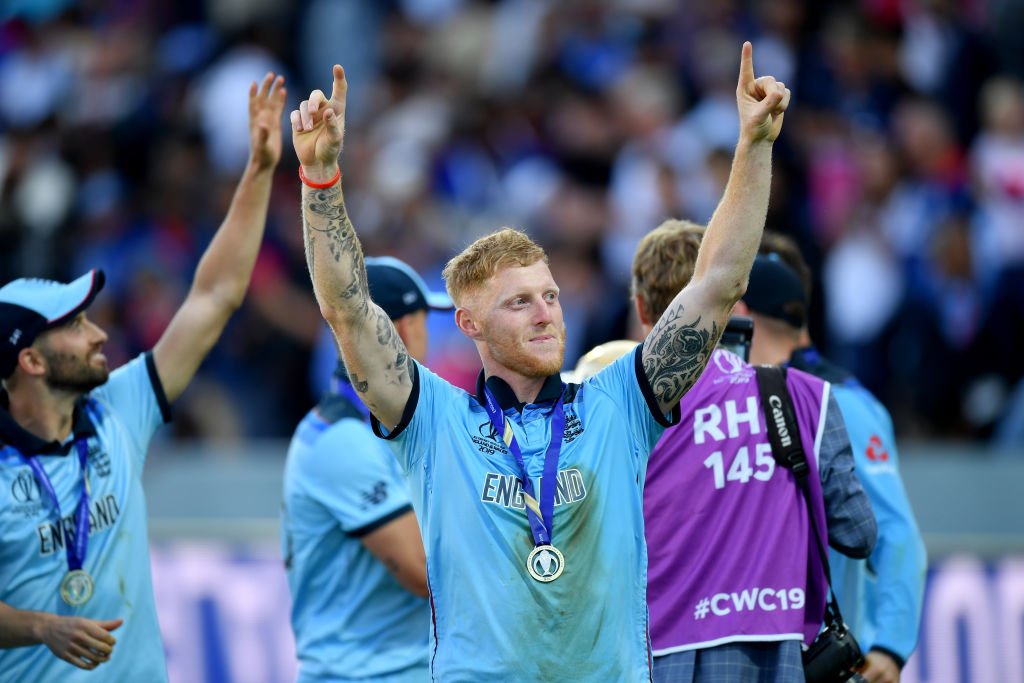 Cricket, under pressure, often makes a play for the absurd. In this kind of reality, a tie was the least these teams could do. Ten surreal minutes later, Stokes staggered out again, down those steps, dirt still caked across the front of his shirt. It was time to finish the job.

Seeing Stokes move amongst his team at the end, face reddened, eyes bloodshot, still in shock, was a moment of extreme poignancy. Because Stokes lives for that lot. And watching him on the outfield, trying to make some sense of the post-match chaos, was also poignant, evoking as it did another memorable moment in the Stokes story.

Remember the Test match at Edgbaston last summer? After he’d bowled non-stop on the fourth morning, crashing into Virat Kohli’s pads to drive England to victory? Four wickets in 14 overs? Back then he was stood mid-pitch, as the crowd went wild, the man who got it done. And that time, with a microphone thrust under his nose, he was found to be literally speechless. He just kept swallowing and gulping for air, shaking his head and staring past the camera, thoughts swirling out of the ground and down the road to wherever.

He knew, then, that he would soon be leaving this team. They would be heading to Lord’s, and he to Bristol Crown Court. They would remain in their show world, and he would be facing the real one.

That was almost a year ago to the week. And now he wins the biggest match of their lives. He will hate any notions of redemption. He does things on his terms, and he’s fiercely unsentimental. But even he will find it hard to resist a rueful smile at where he could have been.

He has been indebted to English cricket, and at times the weight of self-inflicted expectation has seemed to sit a little heavily. Today was the day it all fell away for good. The story is complete. Something transformative; something vast and unchanging, has taken place. The future has opened itself up for the greatest of all games. So here’s to tomorrow, and the next miracle. You can bet they’ll be watching.