Eoin Morgan, the England captain, said that his team have now learnt to better deal with unpleasant situations.

Speaking of the untimely indiscretion of opening batsman Alex Hales, whose positive result from a drug test led to him getting first suspended for 21 days and then dumped from the squad for the 2019 World Cup, Morgan admitted that such an incident a few years ago may have impaired the team’s World Cup preparations.

“I wouldn’t say it’s been smooth, I’d say we’ve been better equipped at dealing with anything that’s cropped up, certainly as a group,” Morgan said at the launch of England’s World Cup kit in East London.

“For me as a captain, being more experienced, and having been through four years of being captain, our prep and planning has been excellent and the guys have responded to that by performing on a consistent basis, probably more so for the last two years than the first two.

“We hadn’t planned exactly for that [the Hales situation], we’d planned for instances when the [team] culture had been tested or individually we’d been tested. There’s still loads of things that we’ve planned for that might continue to crop up throughout the World Cup.

“Our values as a team include the words ‘courage’, ‘respect’, and ‘unity’, symbolising the three lions on our cap, and taking that cap forward across all three formats and all squads.”

"These are the numbers of a bits-and-pieces cricketer, not a fully fledged all-rounder who balances the side. More pertinently, they are not the numbers of a firing-on-all-cylinders Ben Stokes."@the_topspin on Ben Stokes' recent ODI form.https://t.co/5MIbIVm2O5

England have made a seamless transition into a Hales-less outfit. In his absence, they wiped out Pakistan 4-0 in their last assignment before the World Cup. They have also found a suitable replacement for him in James Vince.

Vince’s inclusion was one of three changes to the preliminary World Cup squad that was named last month. Jofra Archer was expectedly included, coming in at the expense of the seasoned David Willey, while Joe Denly made way for Liam Dawson. While Vince and Dawson may be held back as reserves, Archer has a high likelihood of making the XI for the tournament opener against South Africa on 30 May.

While Hales’ omission came down to external circumstances, the other two changes are further testament to how stiff competition is for spots. England. the No. 1 ODI side in the world, have an endless pool of all-rounders, and a batting line-up that runs deeper than anybody else’s in the modern-day game.

“It [selecting the final 15] was the toughest decision I’ve ever been a part of, certainly with this group,” admitted Morgan. “To leave two guys out, one who has been around for the last four years and been a big part of everything we’ve done on and off the field, and the other is an exceptionally talented cricketer. It’s unfortunate for those who missed out, but it was the right call.” 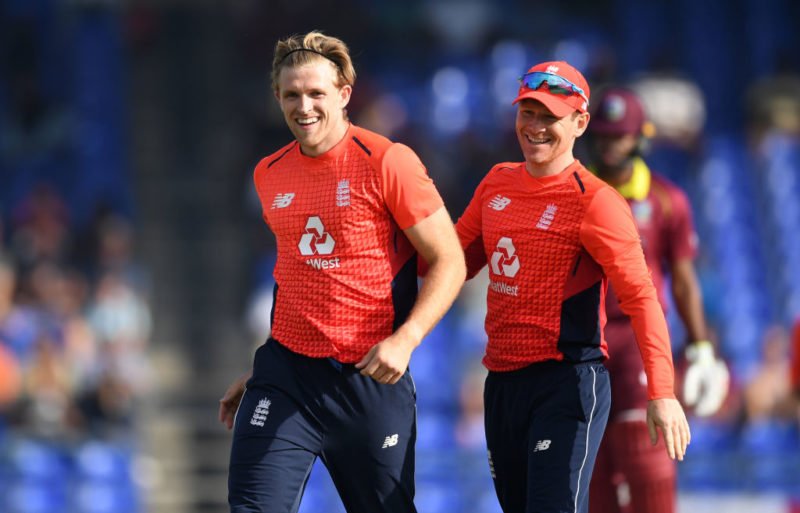 Morgan has overseen England’s transformation into a world-beating one-day outfit under his leadership. But while the current team might seem to possess an air of invincibility, Morgan remains grounded and has admitted that they have had to work hard on certain aspects, such as their game on slow pitches: it was what cost them in the Champions Trophy semi-final in 2017, and resurfaced during the ODIs in West Indies earlier this year.

“I wouldn’t say that we feel fearless. Probably two years ago, we felt more fearless, because we were quite young in our growth as a team,” he said. “We’ve had two more years’ experience on top of that, and we are better at coping and adapting to scenarios and recognising different situations throughout a game. I wouldn’t say that’s fearless.

“One of the biggest learning things that came out of that [Champions Trophy exit] was that it probably came a little bit early for us. We probably didn’t realise how good we were and how poor we were on slow wickets. Since then, we’ve improved our play at both home and away, and on wickets that don’t necessarily suit our planning.”