Following his team’s nine-wicket victory over Sri Lanka on Friday, June 28, South Africa captain Faf du Plessis said that the win felt ‘hollow’, coming on the back of five defeats in seven games before that.

“It still feels hollow,” du Plessis said after the game in Durham. “It’s great winning, obviously, but it is very, very bittersweet, because you know that we’ve let a lot of people down and that was never the plan. So we will enjoy in the changing room. We will get together and we will enjoy the performance.

“But I think, when you go back, there will still be that hollow feeling of stuff that could have been in this tournament.”

"It's great winning, but it is very, very bittersweet because you know that we've let a lot of people down and that was never the plan"

The win was only the second in a dismal tournament for South Africa. It was at best an insurance against finishing with the wooden spoon, with their semi-final hopes already extinguished.

“I feel that the better teams are in the positions they are for a reason,” du Plessis said. “Us, West Indies, Sri Lanka have been the most inconsistent teams, I suppose, and you look at Australia, New Zealand have been very consistent in their performances, so they deserve [a top-four finish].”

Du Plessis played an integral part in the win himself, scoring an unbeaten 96 to help South Africa wrap up a 204-run chase inside 38 overs. It was the South Africa captain’s third 50-plus score of the tournament, but he never truly fired in the tournament as the big century has remained elusive.

“I personally felt I batted really well throughout the tournament,” he said. “I have been getting starts, been feeling good. I just haven’t been able to convert it into big scores.

“For me, it’s the basics of getting a partnership together. Once you have got that partnership, everything becomes so much easier and batting becomes in your own terms out there and we haven’t had enough of that.”

Despite the paucity of wins, there has been no dearth of enthusiasm within the set-up, and the camaraderie within the team has remained strong. 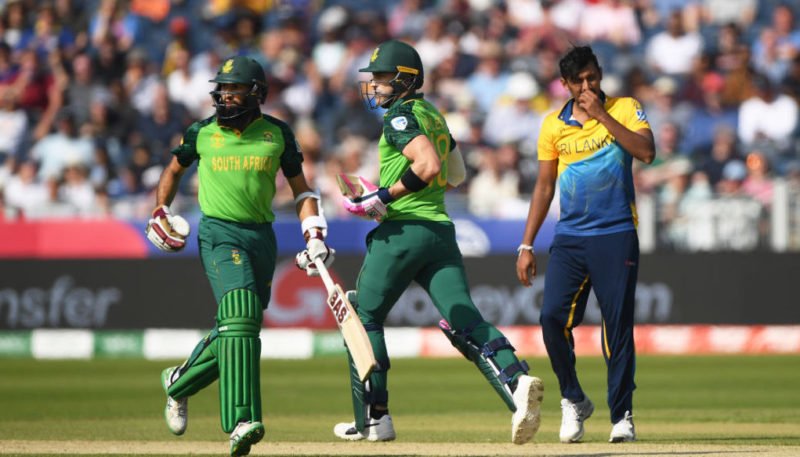 “It’s been good throughout the tournament,” du Plessis said. “I find that as tough as it’s been behind-the-scenes, there has still been a team behind, there’s been teamship behind the performances, so that was never the issue.

“There was never anything behind-the-scenes that wasn’t working. It was purely a case of us not being good enough to beat teams and us letting ourselves down on some other occasions. We have been outplayed one or two times, but we have tried to enjoy it.”

South Africa’s win has dented Sri Lanka’s hopes of a final-four finish, and captain Dimuth Karunaratne put the loss down to a lacklustre batting effort in a must-win game.

“I think it was a pretty good wicket to bat,” he said. “We couldn’t get a big total on the board. I think the only disappointment is that we couldn’t protect the strike, that is the main thing.”

None of Sri Lanka’s batsmen could push past 30, as a dearth of substantial partnerships hurt the side. They limped to a below-par 204, before du Plessis and Hashim Amla put the game beyond Sri Lanka by building a strong foundation, something Karunaratne admitted his own batsmen couldn’t execute.

“That is what I’m expecting from our players – to keep rotating the strike and to bat 35-40 overs and then go for the big shots,” he said. “They unfortunately couldn’t rotate the strike. That is the main thing, and they built the pressure on our side.”