James Vince could only sit and watch the mayhem unfold after letting another opportunity to impose himself as an international cricketer slip by, writes Jo Harman from Old Trafford.

In a recent interview with Wisden Cricket Monthly, Paul Farbrace described James Vince as “one of the best players I’ve ever had the privilege of working with”. He went on to say that Vince’s failure to crack international cricket was one of the biggest frustrations of his time as England’s assistant coach, but predicted his time would come again. “He’s too good a player for it not to.”

Vince’s latest opportunity came along unexpectedly, the result of one Alex Hales indiscretion too many and Jason Roy’s torn left hamstring, and as chances go he really could not have wished for a better one. A World Cup stage, opening the batting against the weakest team in the tournament, a side in disarray – the perfect opportunity, after 38 innings across all formats, to score his first hundred for England and finally announce himself as an international cricketer.

Vince started confidently, as he usually does, tucking his second delivery into the leg-side for a couple before nonchalantly pulling his seventh to the square-leg boundary off the front foot.

From thereon, though, he was unusually skittish, perhaps feeling the pressure of filling Roy’s sizeable shoes (the 46 runs England scored in the first 10 overs was their second slowest start since the beginning of the 2017 Champions Trophy, making their final total of 397, their highest in a World Cup, all the more extraordinary), or maybe just not feeling in great touch after three weeks without a bat in the middle.

Trying to force the issue, Vince advanced down the track to Dawlat Zadran, mistiming a drive which briefly had mid-off interested, and then sliced a pull stroke to deep square-leg in the seamer’s next over which a more alert or agile fielder would have taken.

If England are again to take the plunge with Vince for the Ashes, as they seem keen to do, they need some evidence on which to base that decision

Warning unheeded, he continued to throw his hands at the short ball and it brought about his dismissal in Dawlat’s fifth over, a top edge ballooning to short fine-leg for a simple catch.

Vince was back in the pavilion within the first powerplay, for 26 from 31 balls, another opportunity having passed him by.

If that much wasn’t already clear, Eoin Morgan, Jonny Bairstow and Joe Root made it painfully so over the next 40 overs, as England blitzed 25 sixes – an ODI record – with 17 of them coming from the bat of their supercharged skipper – another ODI record.

Rashid Khan, ranked the best white-ball spinner in the world, was carted for 110 – the most ever conceded by a bowler in a World Cup innings – and didn’t even bowl his full allocation.

In short: if ever there was a day to cash in, this was it. 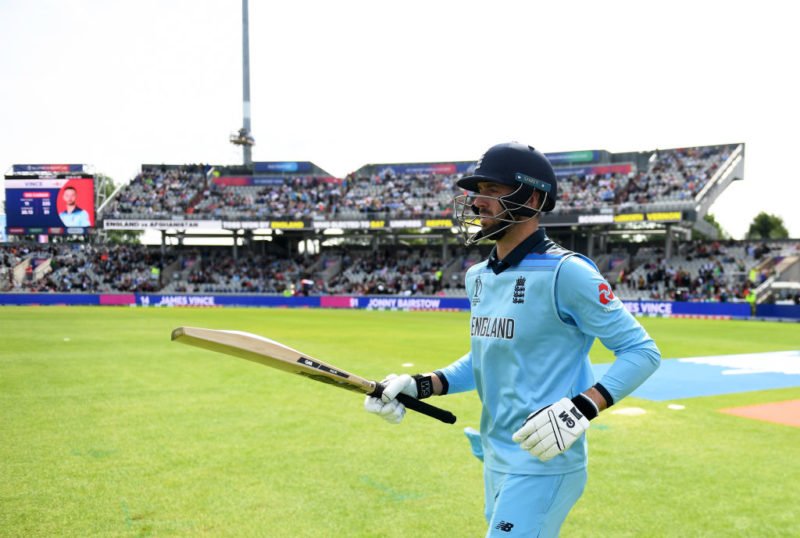 James Vince made 26 before top-edging a pull against Afghanistan

That’s not to say a notable score against an Afghanistan side playing this poorly would have convinced Vince’s many doubters that he is ready to make a success of his England career (conversely, it may even have solidified the views of those who feel he is a fair-weather cricketer who lacks the ticker or gumption to deliver when the game is at its toughest). Or that it would have earned him a sustained spell in England’s one-day team, because it wouldn’t. But there is more at stake here.

Related Story: Seven options to replace Ben Stokes at No.4 for England in ODIs

This always felt like a make-or-break summer for James Vince, who turned 28 in March. There is a belief within the England set-up that he is better equipped technically to counter Starc, Cummins and Hazlewood than the other batsmen scrapping for an Ashes spot this summer; a belief backed up by assured half-centuries at Brisbane and Perth in 2017. And yet he finished that series with an average of 27 and has only averaged 38 in the County Championship since.

If England are again to take the plunge with Vince for the Ashes, as they seem keen to do, urging him to bat higher up the order for Hampshire in order to push his case, they need some evidence upon which to base that decision. With Vince unlikely to make another County Championship appearance before the first Test at Edgbaston begins on August 1, that means making the most of this brief spell in England’s 50-over side.

He has passed up the first opportunity. With Roy hopeful of returning for the clash against Australia on June 25, England’s next match against Sri Lanka on Friday may be his last chance.