AB de Villiers has reopened the volatile topic of his selection for the 2019 World Cup, issuing a clarification on the controversial last-ditch offer.

De Villiers made headlines when it emerged in early June that he had offered to come out of international retirement for the World Cup, only to be turned down by the South Africa team management on the eve of the squad selection.

It was a move that had drawn outcry from several corners, with some critics accusing de Villiers for being arrogant and selfish. Even Linda Zondi, Cricket South Africa’s selection panel convener, said that they declined de Villiers’ offer in order to stay true to their morals and principles.

However, the former South Africa batsman has now come out in the open and revealed a “private” conversation he had with a person involved in the CSA set-up. De Villiers said that the whole saga began with the aforementioned person asking him if he would keep the door open for a return to the side for the World Cup.

“On the day of my [retirement] announcement, I was privately asked whether ‘the door was still open’ for me to play in the World Cup,” de Villiers said in his statement, which he made public via Twitter. “I was asked. I did not offer. I quickly replied ‘yes’. With hindsight, maybe I should have just said no, but my natural instinct has always been to find a way to oblige whenever possible.”

South Africa captain Faf du Plessis had revealed at the time that the offer had been made via a phone call the night before the World Cup team was due to be announced, when the two players were involved in the Indian Premier League – du Plessis with Chennai Super Kings and de Villiers with Royal Challengers Bangalore. De Villiers said that the conversation with the anonymous CSA person was what prompted him to ring up the captain, insisting that he never wished to force his way into the squad.

“During the weeks and months that followed, there was no formal contact between Cricket South Africa or the Proteas and me. I didn’t call them, and they didn’t call me,” de Villiers said. “I had made my decision and the Proteas moved on, enjoying success under the expert guidance of coach Ottis Gibson and the outstanding captaincy of Faf du Plessis.

“Faf and I have been friends since we were at school together and, two days before the World Cup squad was announced, I contacted him for a chat. I had been in decent form during the Indian Premier League and casually repeated what I had said when asked a year earlier – that I was available if required, but only if required.

“I made absolutely no demands at all. I certainly did not try to force my way into the World Cup squad on the eve of the tournament, and did not expect to be included. There was no burning issue from my side, and no sense of injustice.”

De Villiers said that he waited this long before issuing the clarification because he did not want it to be an ongoing saga that distracted the team from its World Cup campaign. De Villiers had said as much at the time the news came out, when he tweeted: “All that’s important is that we should all focus on supporting the team at the World Cup. There is a long way to go and I believe the boys can still go all the way”. 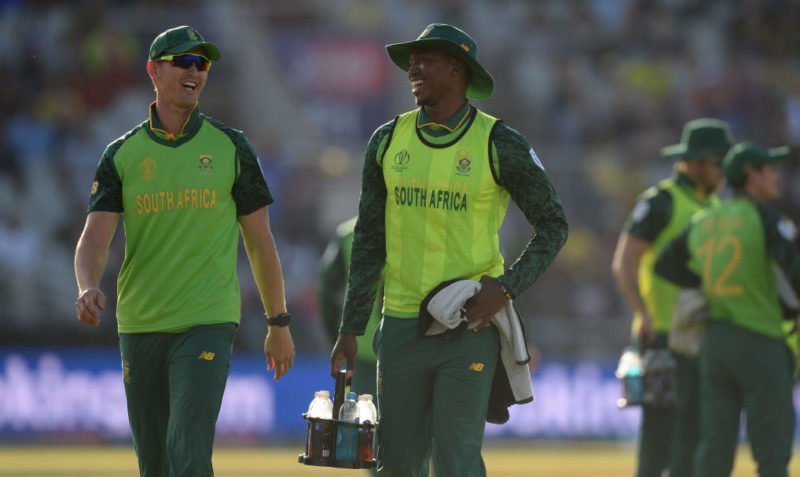 De Villiers said that now that the team’s campaign was over, he wanted to issue a clarification as he had been unfairly perceived to be selfish, while maintaining that he retired for honest reasons – the same ones that he had listed while announcing his decision.

“I continue to be asked to comment on the disclosure, and distortion, of a private conversation that took place just before the squad was announced and, for the benefit of anyone who may have felt let down, would like to explain what happened,” he wrote in his statement.

“First, I announced my retirement from international cricket in May 2018 because I wanted to reduce my workload and spend more time with my wife and young sons. Some have insisted I was motivated purely by money. They are wrong. In truth, I have turned down many lucrative offers to play around the world, and have cut the time spent away from home each year from eight months to just over three months.

“Then, out of the blue, on the evening after the Proteas lost to India, suffering a third successive World Cup defeat, elements of our private conversation were disclosed to the media, and distorted to cast me in the worst possible light. The story was not leaked by me, or anybody associated with me, or by Faf. Maybe someone wanted to deflect criticism. I don’t know.

"I made absolutely no demands at all. I certainly did not try to force my way into the World Cup squad on the eve of the tournament"

“As a result, I was unfairly described as arrogant, selfish and indecisive but, with all humility, my conscience is clear. I retired for honest reasons and, when asked if I could be available for the World Cup, agreed to keep the door open. In the event, understandably, the team moved on. No problem. I am not angry with anybody.”

De Villiers signed off by saying that despite the uproar it caused, the incident has not soured his relationship with the South Africa players, and said that he would always be available for future assistance.

“Now, at this stage of my life, I would like to continue spending time with my family and to play in selected T20 tournaments in South Africa and around the world.

“I have been massively proud to have played for, and indeed captain, my country on the cricket field. My relationships with the Proteas players remain as strong as ever, and I will always be available to support and assist the next generation.

“Lastly, in stating my side of this unpleasant and unnecessary saga, I want to stress my continuing support for the team and the game that has shaped my life and provided me with so many lasting friendships and incredible opportunities.”